Have you heard about ABC’s new comedy show, The Mayor? It’s an edgy, funny, and upbeat show featuring a Mayor who accidentally wins the role from a publicity stunt. Read about my interview with Bernard David Jones and Marcel Spears, plus my thoughts on this new show!

Three weeks ago, after watching the premiere of black-ish, a new comedy show on ABC called The Mayor aired. Zayd’n was still up, and said, “hey, let’s watch this one!”

We started watching it, and he was cracking up laughing during the 30-minute episode. After it was over, he said, “this should be our new show to watch!” We agreed and set the DVR to record the season.

A few days later I received the itinerary on an upcoming press trip to the Thor Ragnarok premiere.  Part of our schedule included meeting two actors from The Mayor. When I told Zayd’n this, he was upset and excited at the same time! Now, he really wanted to go with me, and although he was disappointed that he couldn’t go, gave me some questions to ask them.

On arriving at Walt Disney Studios last week, myself and 24 bloggers made our way to the ABC building to meet Bernard David Jones (“Jermaine Leforge”) and Marcel Spears (“T.K. Clifton”).

As soon as we walked into the room, I could feel their good vibes and energy. They were both standing at the door, greeting each one of us, and giving out hugs and selfies!

After we all sat down, they were formally introduced, followed by a few snippets about The Mayor. They also informed us that this would be their first time watching the second episode, “Filibuster.” In this second installment, the Mayor, Courtney Rose (Brandon Micheal Hall) is trying to fulfill a promise he made to his old elementary school’s music program. He finds out the hard way of how the system works, but with the help of Val (Lea Michele) and Jermaine, they work together to go head-to-head with Councilman Ed Gunt (David Spade).

After the screening was over, Bernard and Marcel answered questions from myself and other bloggers. I wish I cover all the things we talked about, but I’m going to highlight a few. 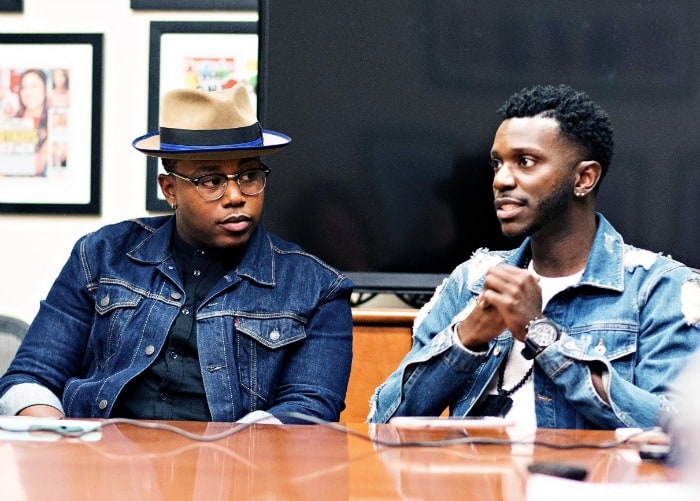 How It All Started

When asked about how they got involved in the show, Bernard stated after reading the script from his agent; he knew he had to be a part of this show. “I don’t know how I’m gonna do it, but I need to be a part of this. It was so amazing. The script was so funny. It was topical. It was current, and I was just like, man I need to do this!” 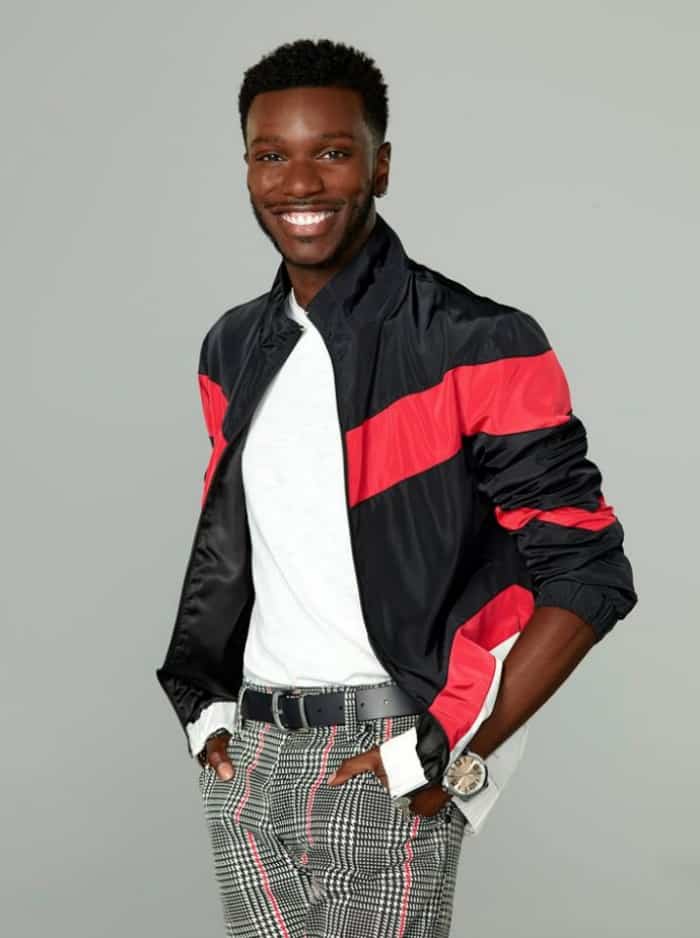 Marcel stated that he had originally auditioned for the role of Courtney Rose, but it wasn’t a fit. However, the casting director knew they needed Marcel and cast him for the part of T.K. Clifton. 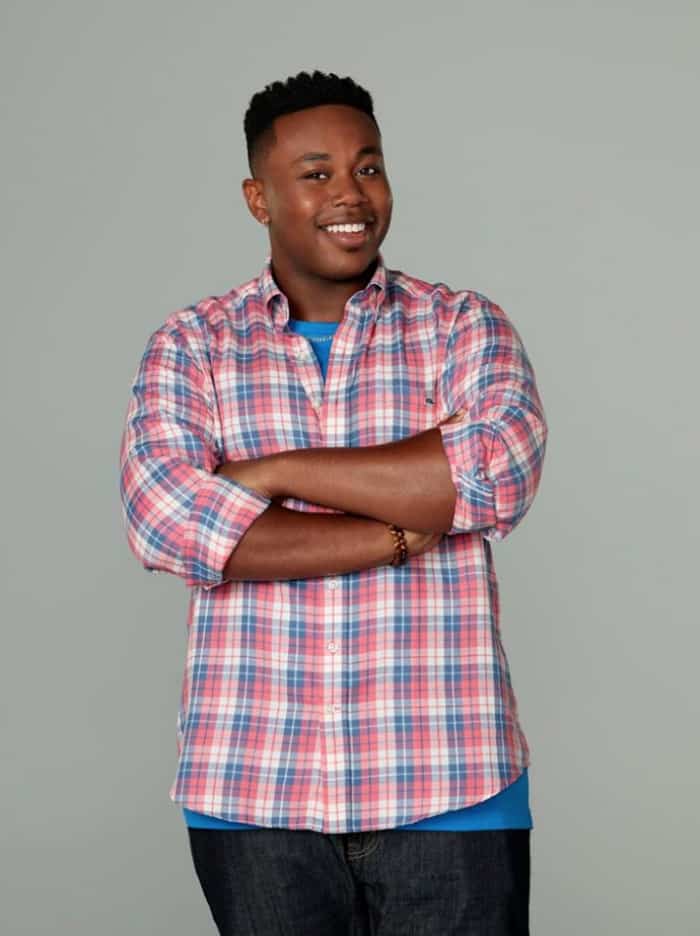 Marcel: [on landing this role] “I was ready!” He also shared with us the difference between acting on stage vs. television. “Being on stage, it’s live every night. You can do the show eight times a week, but for that audience, it’s their first time seeing it sometimes, and that’s the only show that they’re going to get. [On television], you get a chance to really craft your performance in a different way. I get to see my performance and edit it; or if I have an idea, if I have an ad lib, I know how to make that joke work, in real time, I get to [say] let me get one more take.”

This show is about a young rapper named Courtney Rose (Brandon Micheal Hall) needing a big break. He’s still living with his mom, Dina Rose (Yvette Nicole Brown), in a small inner-city apartment, making music in his bedroom. He comes up with an idea to pull a publicity stunt, hoping it will land him a significant opportunity. Cout decides to run for mayor of his California hometown, Fort Grey. However, his plan of generating buzz about his music career takes a surprising turn when he wins the election! Now faced with running the city, having no political experience, he turns to his homies, Jermaine Leforge (Bernard David Jones) the smooth operator, and T.K Clifton (Marcel Spears) the sensitive sweetheart, to serve as his two unconventional political aides. Valentina Barella (Lea Michele), decides to change sides after running the campaign of losing mayoral candidate, Ed Gunt (David Spade), to join Courtney as his chief of staff.

The Mayor is a family-friendly show, and Bernard and Marcel both confirmed it would stay a family show. Bernard stated, “I think that’s what’s important about our show, and is special is that you can gather the family together, sit down and watch a show and then maybe discuss some of the issues that are happening.”

And I agree. We watch this show together as a family, and we can answer questions that may come up from the boys and discuss issues addressed on the show. 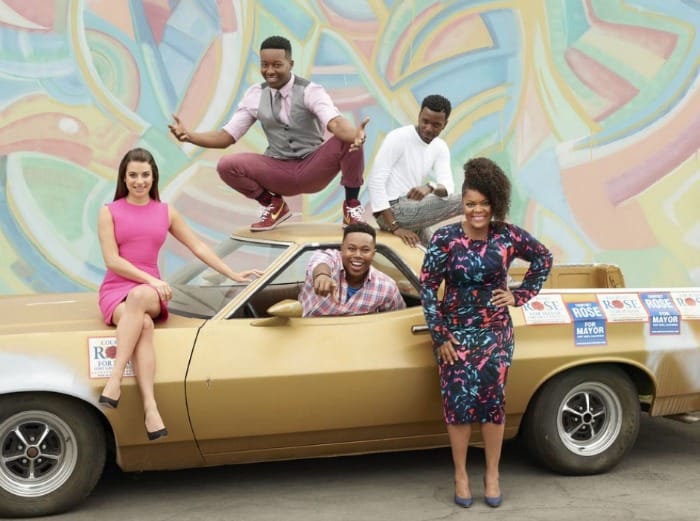 The guys described the atmosphere on set to us.

Bernard: “Oh, it’s amazing. I mean, we have Yvette Nicole Brown. People are like, “Yvette, we love you.” And I always say, Yvette, you know what, I hope that people love me the way that they love and respect you. And she said, “just be yourself and have a heart for people.”

Marcel: “Dawg, you can’t walk nowhere with Yvette. They love her!”

Bernard: “And so, that’s been some of the best advice that she’s given, but she is literally like Big Sis!”

You could hear the admiration they have for Yvette Nicole Brown in their voices and see it on their faces.

They also talked about Brandon, and how he is a great actor, and his ability to be a leader.

And then there’s Lea. She is like the sister in the group, “she got three new brothers that she loves,” states Marcel.

Based on the chemistry I witnessed from Bernard and Marcel, I can tell that they have a lot of fun on set. They also talked about how the women are the bosses since Lea has been acting for about ten years and Yvette, respectively for 20 years.

They were also asked what it was like to work with David Spade. Both guys mentioned that it was a cool opportunity to work with him, and how supportive he has been, and some of his snarky comments have made the script. 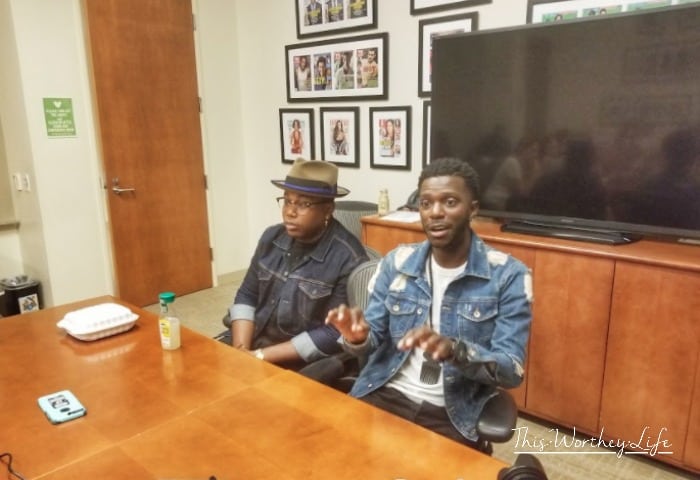 When you think about Courtney Rose as the Mayor, compared to our country’s current situation, they both share no political experience, but with a different approach to their leadership.

The question was asked about taking on a politically flavored show at this time in our country’s climate.

Bernard: “As artists, it’s kind of our duty, our job to be able to hold a mirror up to our country, our world and say, this is what’s going on. How do we fix it? What can we do to fix it? And I think our show is an awesome representation of what happens when somebody that has a heart for people, that understands community and unity, leads with love.”

And although Courtney had no intention of winning the election, he did. However, he decided to take responsibility and make a change.

And while this show doesn’t take a specific “side,” it does make a clear point to the kids of today and millennials. You can be young and make a difference. It starts with one person, one spark, one change.

Marcel: “It’s an opportunity for us as artists to provoke change and to inspire people.” 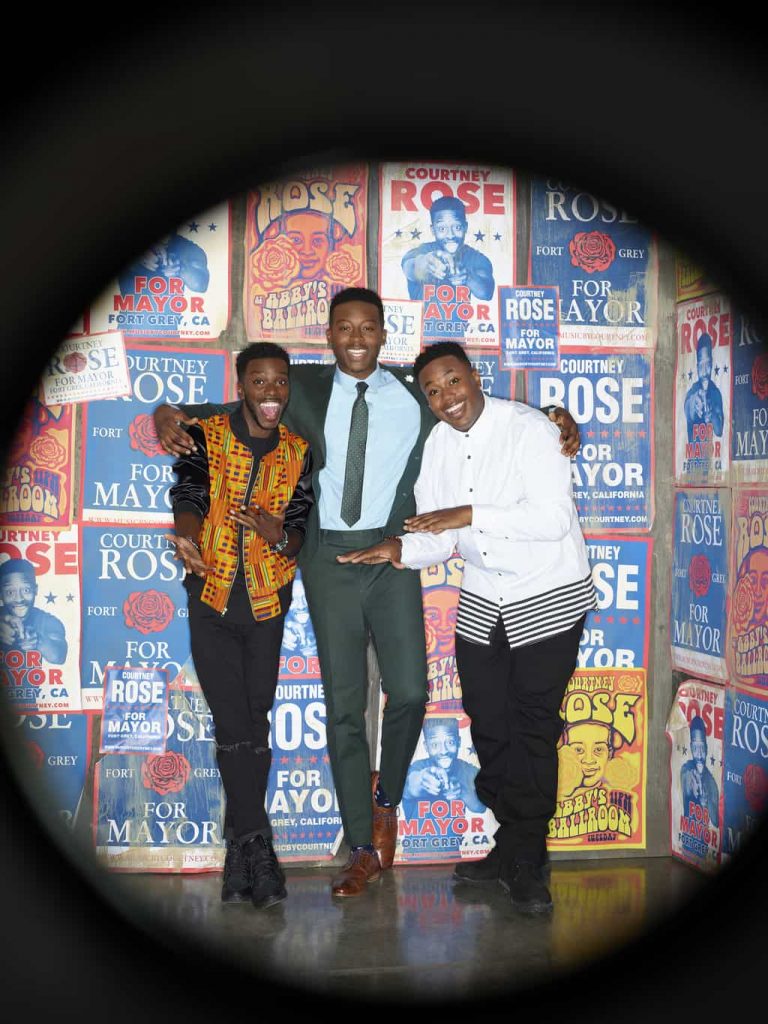 On Being Role Models and Being Black

A cool obvious about this show is that it’s a diverse group of people, with three main characters being black males.

As a mom of three boys, this is important to me. Representation matters. I’m glad for networks like ABC that gets this and delivers shows that speak to a wide range of viewers.

This show changes negative images you may see of Black men, to positive role models my boys can look up to and admire.

Marcel also spoke about how visibility and representation matters. When he was growing up as a kid, he watched shows like Martin and Fresh Prince, seeing these Black men be themselves, cool, funny, intelligent and articulate, noting that’s not something you see all the time outside of scripted TV.

Bernard and Marcel both spoke praises about the Producer of the show, Jeremy Bronson on creating these characters kids can look up to. Bernard, “they can aspire to be the Mayor, or, you know, Director of Communications. So I think to Jeremy’s testament, that is an amazing thing that he did was create these characters that grown-ups can laugh at. You can catch the grown-up jokes and then the kids can look and aspire to be those guys.”

Marcel also talked about how adamant Brandon was about his love interests being black women. “You don’t see all the time Black men choosing Black women, especially with three young brothers on the show.”

On how this show speaks to your younger self, Bernard talked about your dreams can actually come true. “You can actually have a dream, whatever that dream may be, if you work hard and you’re persistent, and you stay focused, it can come true.”

All three black men grew up in the ‘hood, all three living out a dream they once had and now share together. 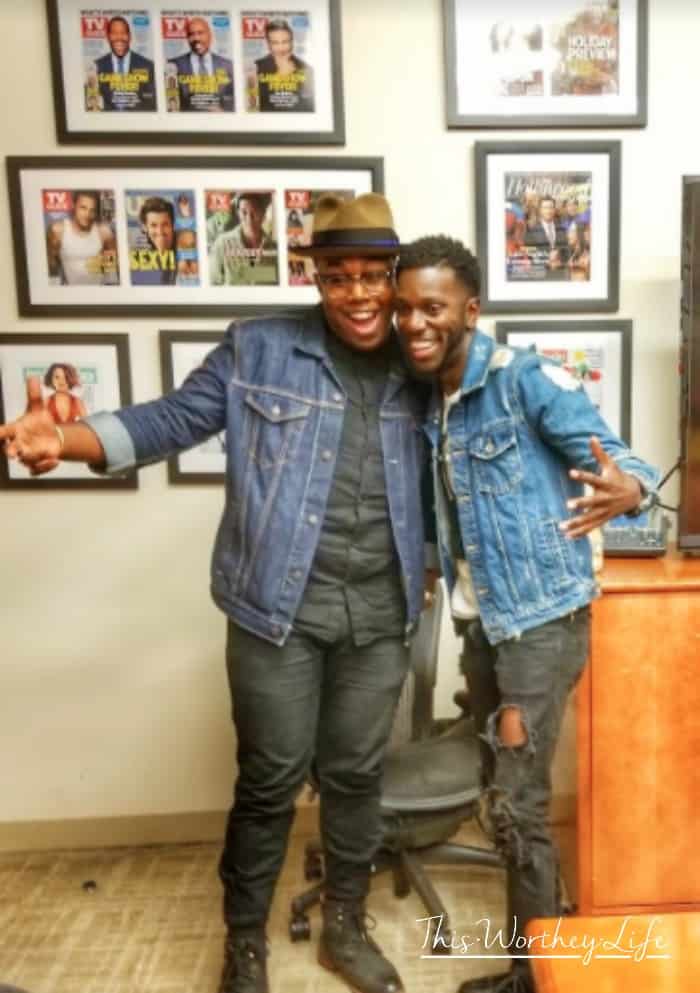 I’d have to say, if I wasn’t already a fan of The Mayor, after speaking with Bernard and Marcel, they would have made me an instant fan. The fresh energy they bring to this show, newly minted primetime actors, and great role models for my boys is what will keep me coming back to watch this show. I’m looking forward to how this show will progress during the season, tackling sensitive and important topics, all while bringing great energy and laughter for families to enjoy week after week.

After wrapping up our Q&A, they were both gracious to take photos with each blogger. At the same time, my 12-year-old face timed me (I was sending him updates during the interview), and he was able to “meet” the guys. Yup, this mom scored some major brownie points. As a new and already BIG fan of The Mayor, Zayd’n watches each episode at least 4-5 times per week.

Have you watched this show? If so, drop me a line below letting me know what you think! If not, catch it on Tuesdays on ABC at 9:30/8:30 CST!

« Spicy Rum Apple Cider
Why SUV Camping In The Kia Sorento This Summer Was An Awesome Idea! »