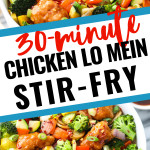 Get dinner on the table quickly with this 30 Minute General Tso’s Chicken Lo Mein Stir Fry.

This is a super easy recipe with fresh vegetables and General Tso’s Chicken.

No worries because we got a crazy good quick fix when it comes to giving your family dinner in thirty minutes with frozen foods! 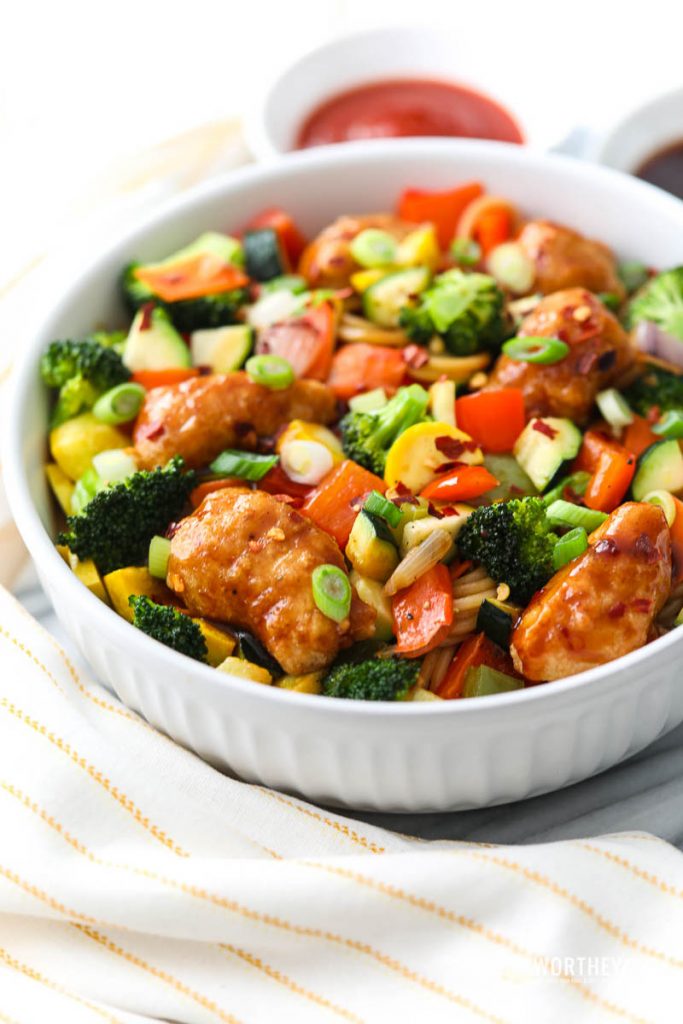 Busy parents have a lot on our plates, and sometimes getting food on the plate can be a considerable challenge.

We are here to show you how we created a beautiful, nutritious, and with pops of color all over the place. And we’re using frozen General Tso’s Chicken to get the job done.

Well, thin spaghetti cooks in 9-10 minutes, and that goes a long way in getting this 30-minute recipe finished and on the plate.

Plus, pasta is versatile and works incredibly well in all kinds of dishes. 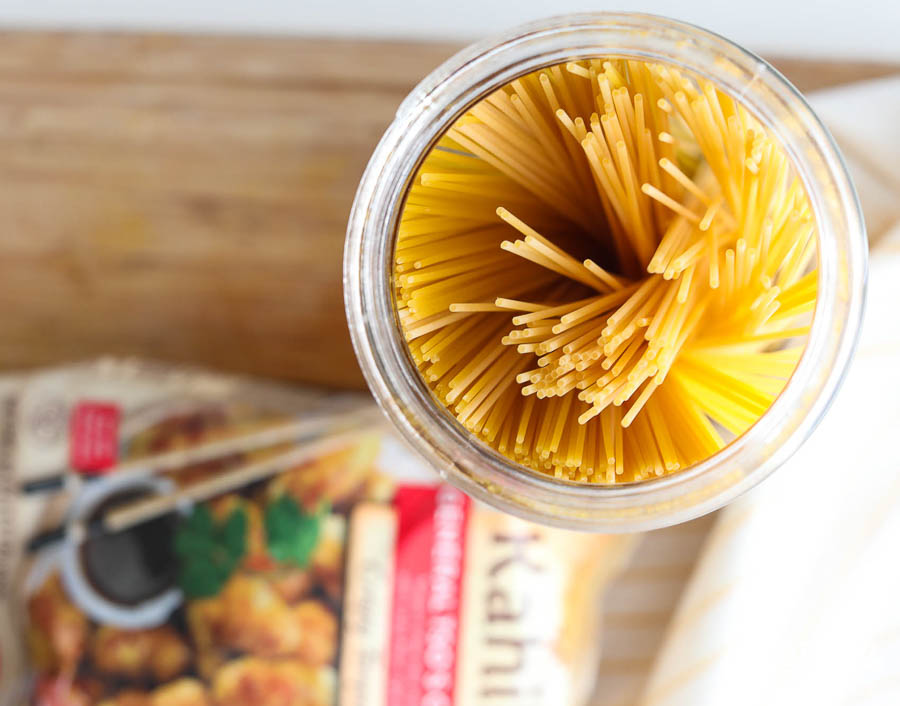 Here’s the deal with this recipe, the key to getting all of its components done and mixed in under 30 minutes is having multiple pots going on at the same time.

First, since we’re using thin spaghetti pasta, get the water on the stovetop and boil ASAP and add a tablespoon of salt!

Then preheat the oven to 400 degrees, arrange the frozen General Tso’s chicken on a baking sheet lined with parchment paper, then bake them for 15 minutes.

Now, let’s prep all of the veggies. If you have time, prep the vegetables the night before. It’s a huge time saver.

But, even if you didn’t prep the veggies, it’ll only take a few minutes to get everything sliced, diced, and cut up.

I also used minced garlic from a jar instead of peeling and mincing 3-4 cloves. 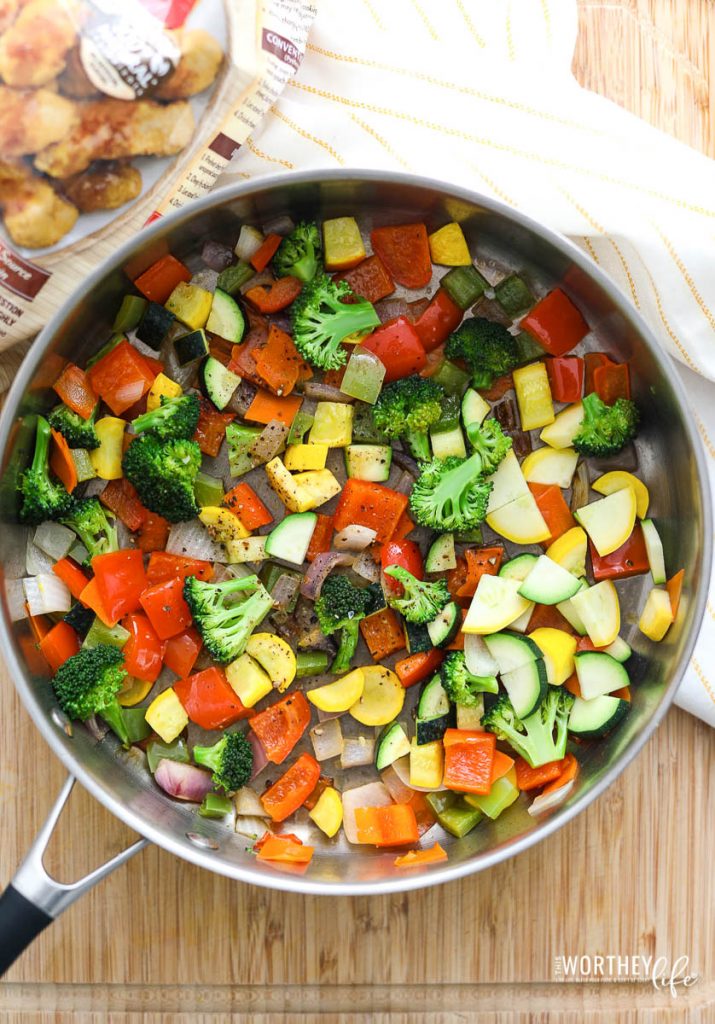 Next, get a large skillet over med-high heat and add two tablespoons of canola or coconut oil.

When the oil is hot, sauté the onions for three (3) minutes, add the remaining veggies, season with sea salt and freshly cracked black peppercorns, cover the skillet with a tight-fitting lid, and reduce the temperature to low.

Allow the vegetables to steam for four to five (4-5 minutes), then remove from heat. 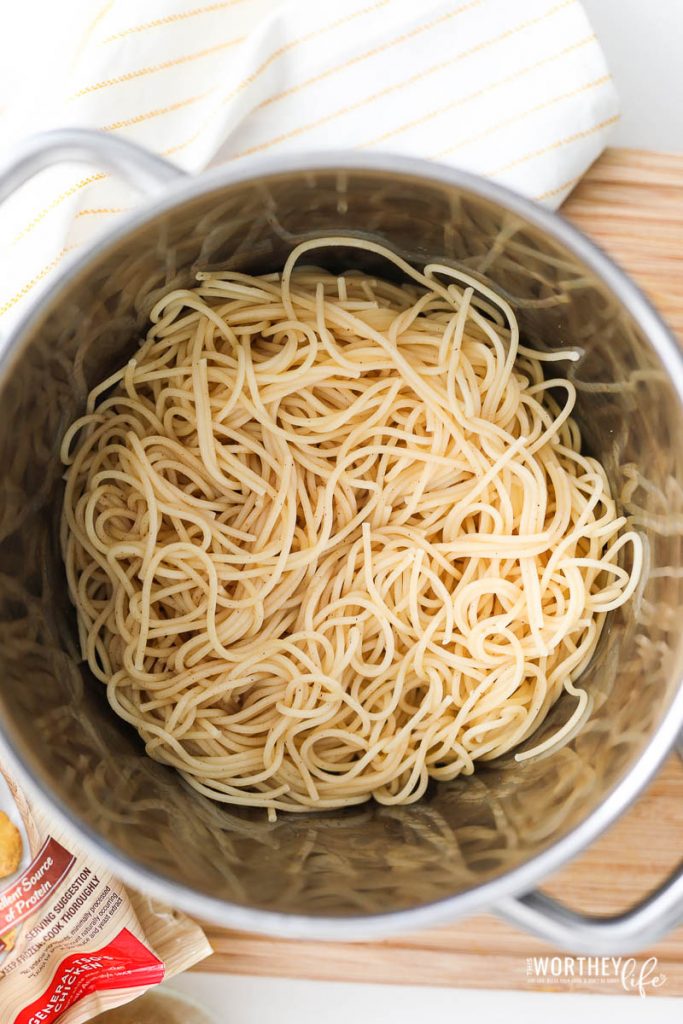 Next, when the pasta is al dente, drain off the water using a colander and return to the pot.

Add a tablespoon of Chinese five-spice seasoning and a few dashes of low-sodium soy sauce, toss the pasta and add half of the sauce packet from the frozen General Tso’s Chicken package. 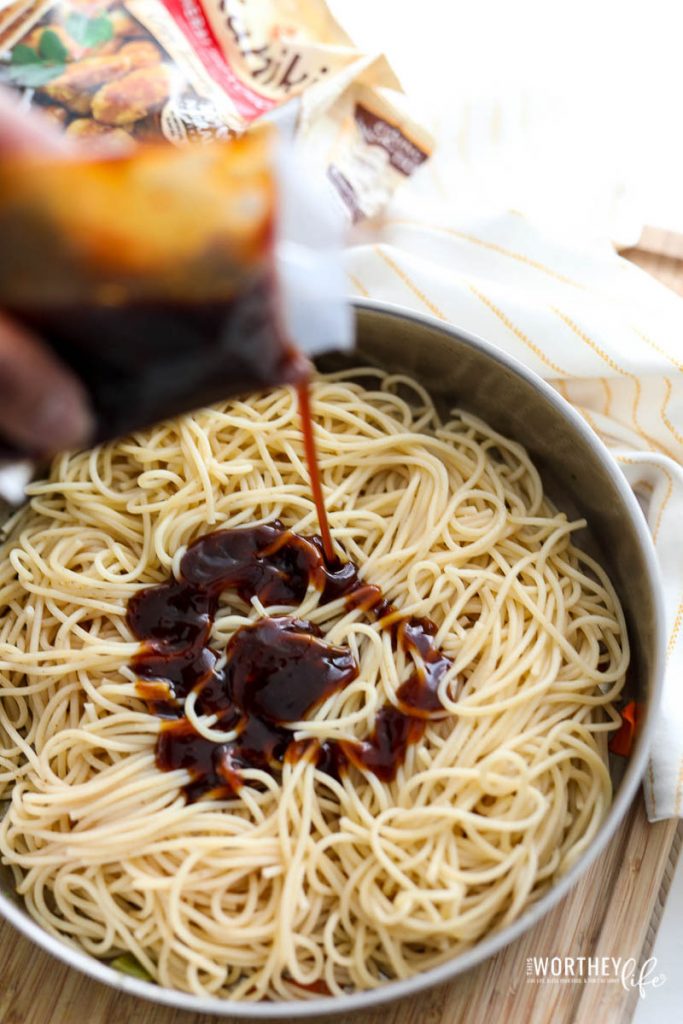 Add the veggies to the pasta and toss. Place the General Tso’s Chicken in a bowl, add the remaining sauce, and toss to coat.

Add the chicken to the pasta and vegetable mixture, and dinner is served. 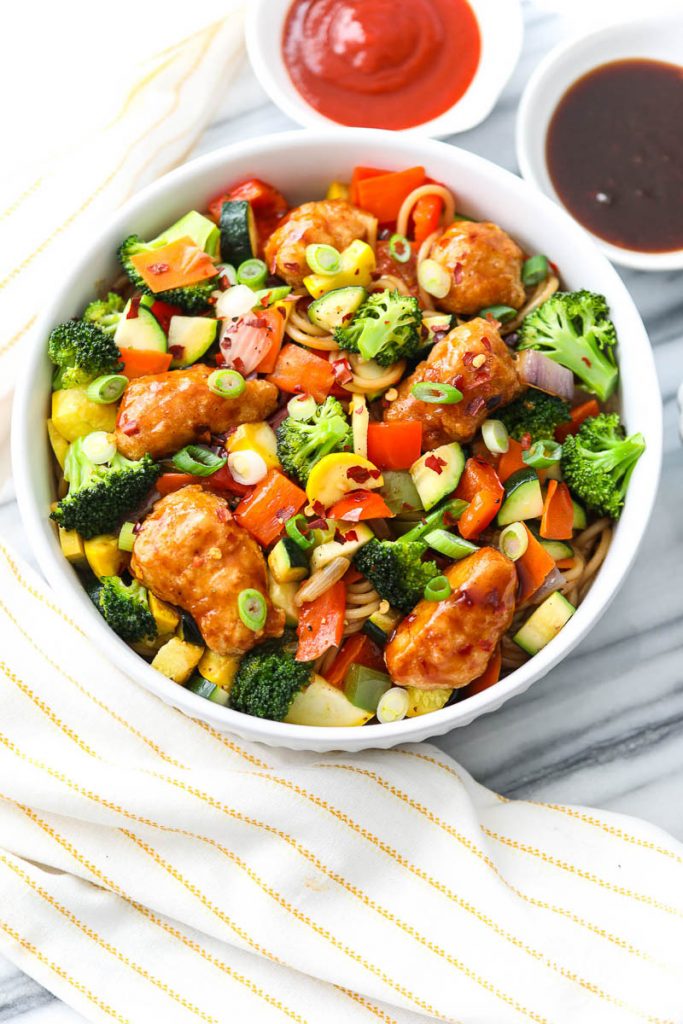 Kahiki General Tso’s Chicken. This is crispy tempura white meat chicken served with a zesty Asian-style sauce, and you can find it in the frozen foods section of your local grocery store.

Thin Spaghetti. Pasta works well in this recipe, and although pasta isn’t typically used as an ingredient in Asian-inspired recipes, it is surprisingly delicious in this easy 30-minute recipe—regular spaghetti cooks in 10-12 minutes.

However, thin spaghetti is done in 6-8 minutes.  Always add pasta to boiling water and add a pinch of sea salt.

Peanut Oil. I sautéed the vegetables in a tablespoon and a half of peanut oil, but use whatever you have, like vegetable oil, canola, or coconut oil. I also drizzled on some sesame oil to give the recipe an additional Asian touch.

Seasoning. A little Chinese five-spice seasoning goes a long way, I also used minced garlic, a dash of red pepper flakes, and a few splashes of low-sodium soy sauce, but you can also substitute the soy sauce with fish sauce, coconut aminos or liquid aminos. 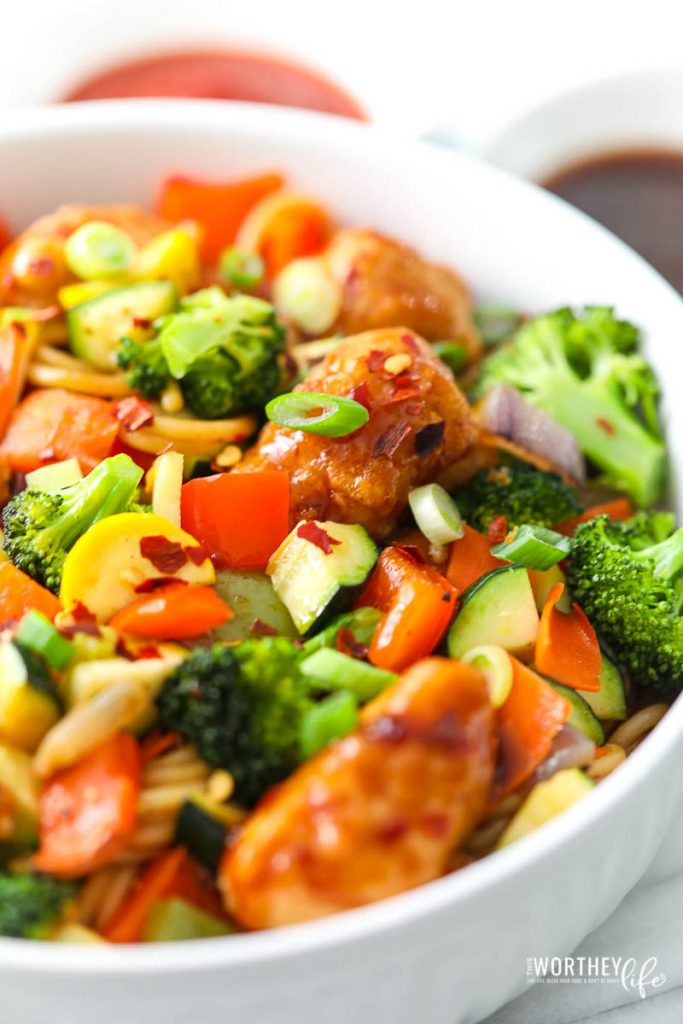 You Will Love This Recipe Because It’s:

Has Lots of Veggies

It is Finished In 30-minutes 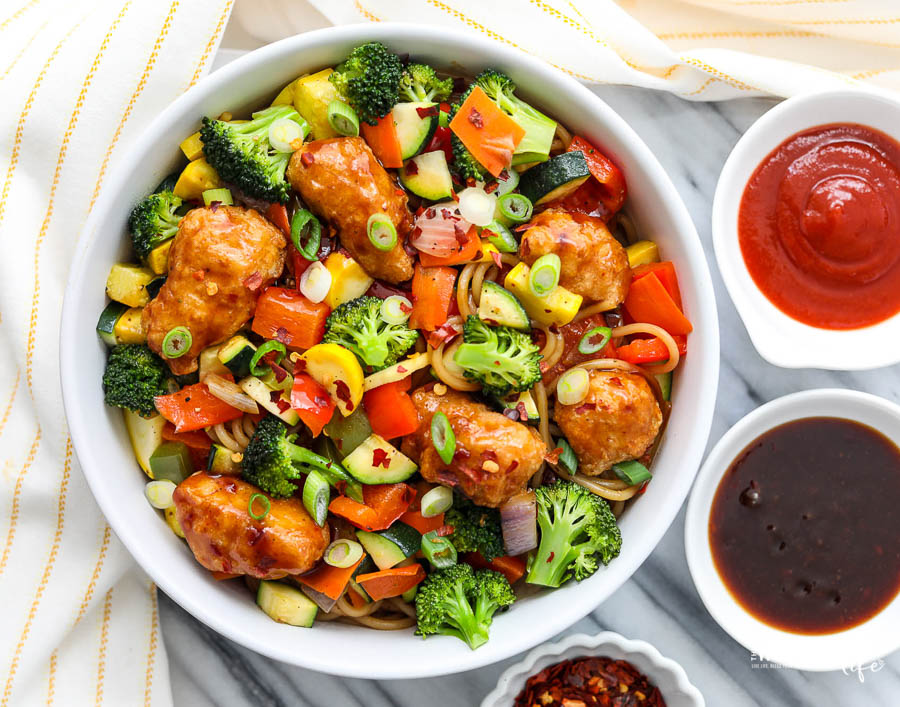 Now that you have the recipe, it’s time to prepare this easy-to-make, deliciously nutritious dinner idea for your family. 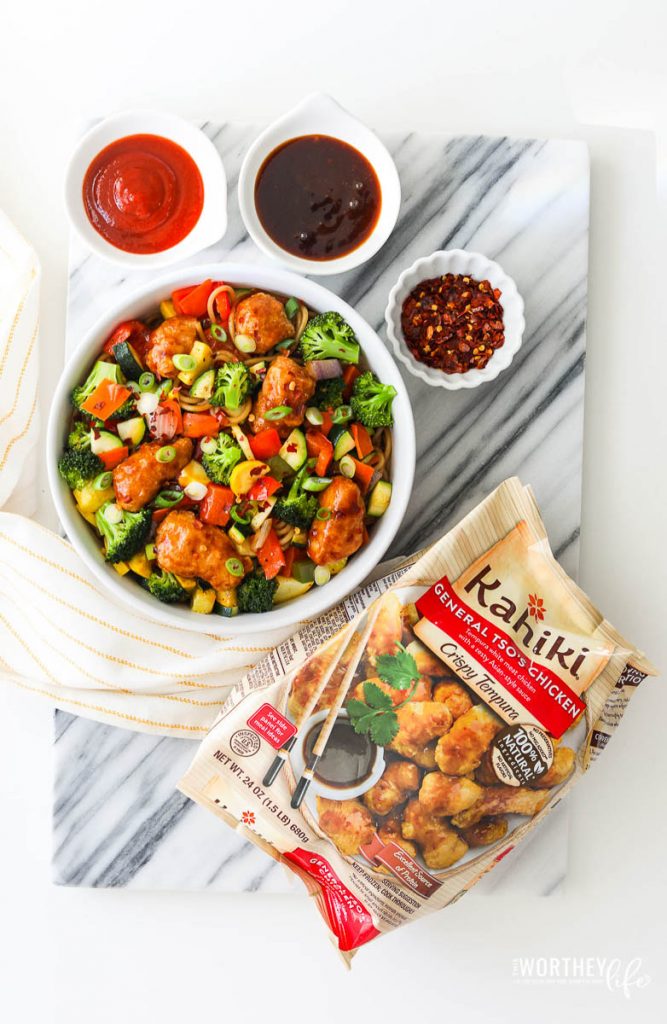 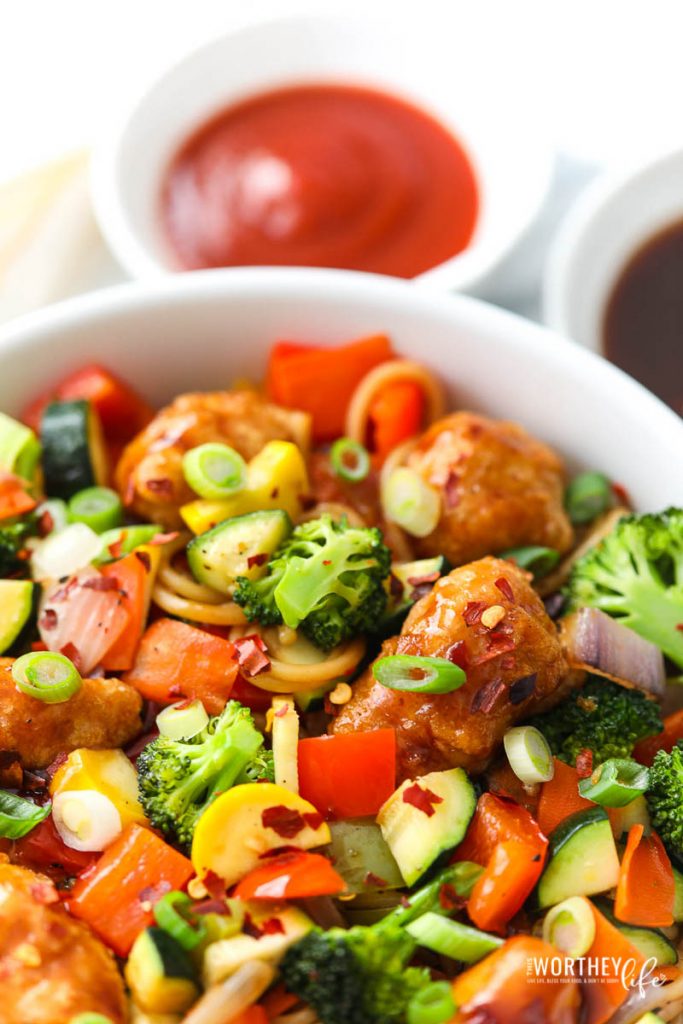 What is Chinese Five Spice seasoning?

Chinese Five spice seasoning is very popular spice blend. Depending on the brand you buy you will find it has cloves, cinnamon , Sichuan peppercorns, fennel and even star anise.  Some blends even have orange peel and more. You will find it is full of warm spices, pepper, and more flavors. It truly enhances a dish instantly.

Can I change up vegetables used?

The beauty of a stir fry is you can essentially use any vegetables you need to get used up. From snap peas to zucchini and peppers and more. Just chop up and cook till done to your desire doneness.

Can you meal prep with this General Tso’s?

Yes, you sure can. Just place the chicken and vegetables in a container and consider adding in some rice. Then use this for grab and heat up lunches or dinners. This recipe reheats well, so it makes for an easy dish full of nutrients.

How to make this General Tso spicier?

What to serve with this dish?

We love to pair with rice or even cauliflower rice if you would like. This is a very simple dish and can be a meal in one with all the meat and vegetables.