One of my favorite interviews from the Incredibles 2 press junket has to be this one.  Meeting and interviewing Samuel L. Jackson was a unique and comical treat. He shares his thoughts on his role as Frozone, his superpowers, and all about the super suit. 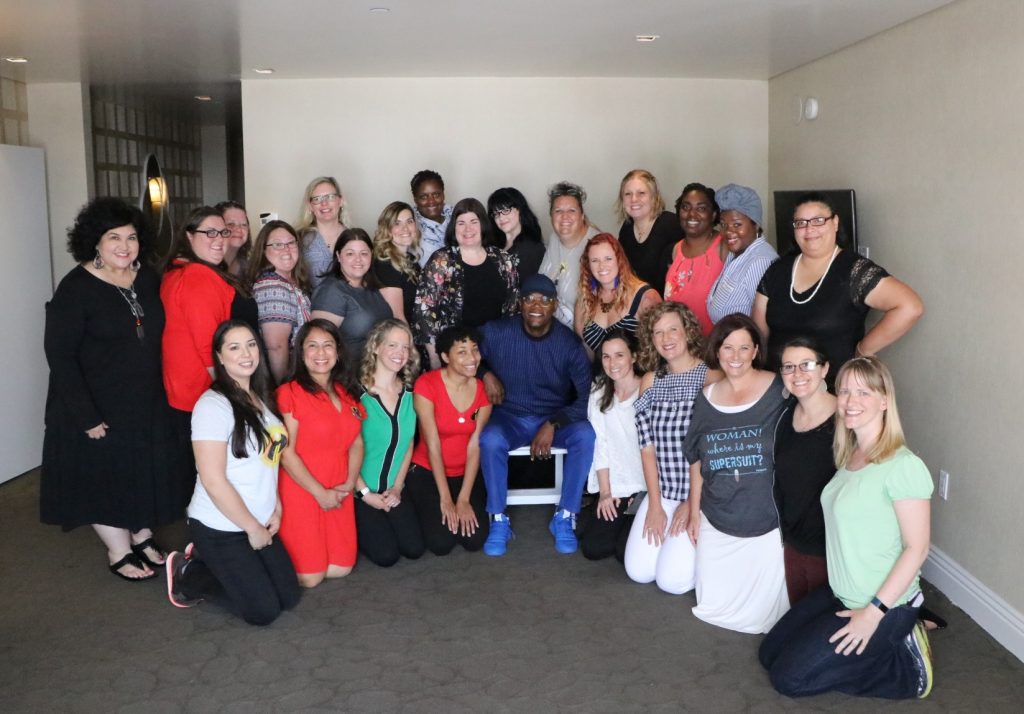 When I found out WHO we were interviewing for the Incredibles 2 press junket, I was standing in Kroger checking my email. I let out a little squeal when I saw his name. I’ve watched Samuel L. Jackson on screen for YEARS. I’ve always appreciated his authentic acting skills and wondered if he was like that in person. One of my favorite movies from his earlier days is Pulp Fiction. He also stars in one of my favorite series, Jurassic Park (first one). And we cannot forget his iconic role in Snakes on a Plane. LOL Soul Men, Kong, and of course, all the Marvel movies are other favorite movies I’ve loved seeing him in. However, he noted that his favorite movie (of him) is The Long Kiss Goodnight.

CHILLING OUT – Frozone is back in “Incredibles 2,” cooler than ever and lending a helping hand when the Parrs need him most. Featuring the voices of Huckleberry Milner as Dash, Sarah Vowell as Violet ad Samuel L. Jackson as Frozone aka Lucius Best, “Incredibles 2” opens in U.S. theaters on June 15, 2018. ©2018 Disney•Pixar. All Rights Reserved.

Then there’s Disney Pixar’s Incredibles and Incredibles 2, as the character Lucius Best a.k.a Frozone. LUCIUS BEST (voice of Samuel L. Jackson) is not only Bob’s best friend; but he’s also a fellow-former Super who’s so chill, he can make ice with the point of a finger. But even when he’s not fighting crime as Frozone, Lucius is all about style. He has a quick wit and a cool, can-do attitude—and he wouldn’t think twice about breaking out his supersuit if it could help bring Supers out of hiding.

He walks into our interview room shortly after we had wrapped up a fun session with Holly Hunter and Craig T. Nelson. So of course, the energy was already high, but it elevated quite a bit when Samuel L. Jackson stepped in. After his shocking look at our all of wild applause, he gets comfortable in his chair, noting that Incredibles plushies sitting on the desk (and wondering where was his plushie), and we get started.

His feelings on making Incredibles 2

Naturally, just like our first question for Holly and Craig was about the expectancy of an Incredibles 2, we ask Samuel the same question. His answer was different, also simple and straight to the point. I should point out, during the entire interview, Samuel L. Jackson keep it authentic and on 100! That made my little heart happy. Many times you hear about celebrities being different in person versus how they are perceived, but he was a straight shooter.

Jackson stated he was relieved about the making of Incredibles 2. He noted his Twitter feed is always filled with this question, “when are they going to make an Incredibles 2? Like it was my decision!”

“Now I feel a lot better knowing the pressure has been relieved, they’ve made it, people can be happy.” He also went on to state, “can we really do something that awesome and just a little bit more awesome the next time, so it justifies us doing a sequel?  And I think they accomplished it, you know, I mean the movie is kind of awesome.” 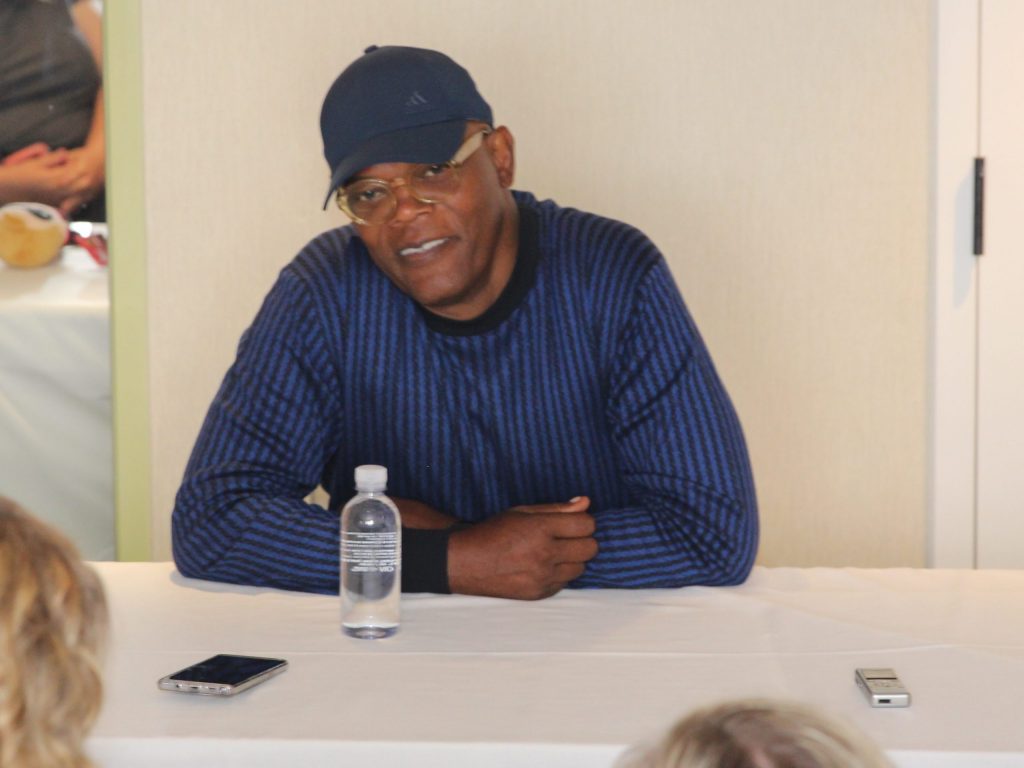 As I mentioned, Samuel kept his answers with us frank. This next question made me crack up. The blogger asking this question is such a sweetheart. She stands up and asks, “This is Pixar. Did you feel the magic as you were working on it?

Samuel L. Jackson: “No!” We burst into the laughter. The WAY he said it, and the look on his face was like, um, nope, next?!

Another question that was hilarious and totally SLJ was one asked about how he related to his character, Frozone since it seemed to fit him naturally.

His answer: “Really?  I’d be shooting ice, not fire; I’m not hot like that?  (the room erupts into laughter) Oh, I see, I see… Oh, fire is for the Black Panther guy. (OMG, dying with laughter at this point) Old guys get to be cool, not hot. That’s a little ageism; I’m feeling a little #MeToo about that!”

This guy is HILARIOUS!! I couldn’t keep a straight face for most of this interview. He kept us in stitches.

Here’s another funny moment. Someone mentioned Pixar putting Easter eggs into this movie. They sat there trying to explain it to Jackson, and he looked at her and said, “I know what an Easter egg is!” (The way he said with the look on his face was so funny!) 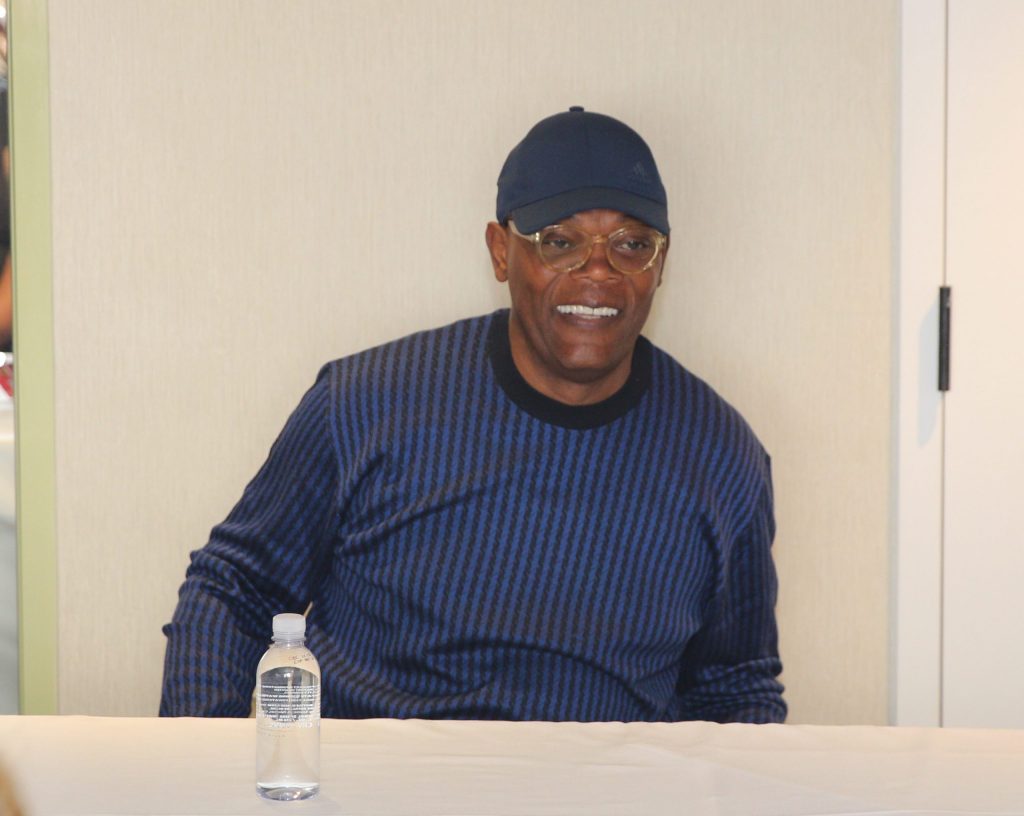 I love hearing about the love and relationships. In Hollywood, you are constantly hearing about this person divorced that person, or this actor is dating this other actor, etc. But when you hear about couples that have been together through thick and thin, that should be celebrated! We don’t celebrate this enough. A question was asked to Jackson about his real-life super-power.

His answer was the best! “Earning money for my wife and daughter.  (We had to stop and applause for this!) Survivingthirty-eight years of marriage yeah, that’s the superpower.

I also love seeing #blacklove As a black couple, seeing other couples that have been married longer than us, gives us the push we need at times to keep going! 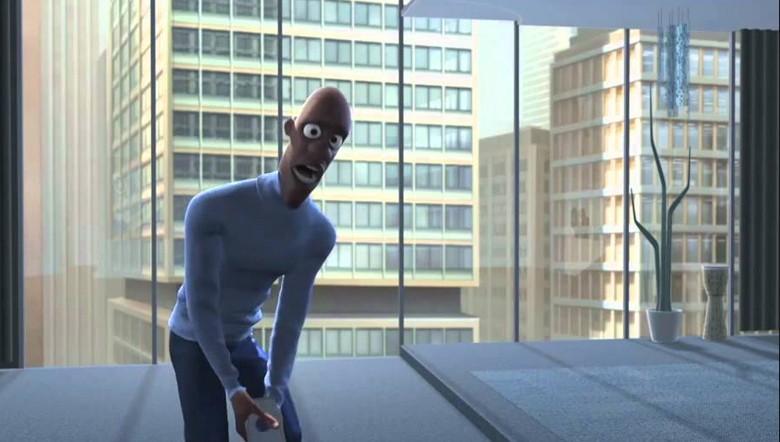 Honey, where is my super suit?

I know a lot of people have been curious about the character who plays Honey. I thought for sure in Incredibles 2 we would get to “see” her. But nope, it’s just her voice. This is one of my favorite moments from the first movie.

Lucius: I need it!

[Lucius rummages through another room in his condo]

Honey: Uh-uh! Don’t you think about running off doing no derring-do. We’ve been planning this dinner for two months!

Lucius: The public is in danger!

Honey: My evening’s in danger!

Lucius: You tell me where my suit is, woman! We are talking about the greater good!

Honey: ‘Greater good?’ I am your wife! I’m the greatest *good* you are ever gonna get!

So, of course, I had to ask him about Honey. Jackson mentioned that he has met her going into the studio, but as far as WHY she isn’t a character, here’s what he had to say, “that’s about my pay grade!”

I responded with how much I love that line because it’s me saying something similar to Derrick.

SLJ: “Yeah, honey where is my super suit? Oh my boyfriend’s got it, he’ll bring it back tomorrow my boyfriend has got it, but he’ll be back with it!”

At this point, our laughter is out of control. Just when we think he can’t keep saying anything else funny, he nails it! 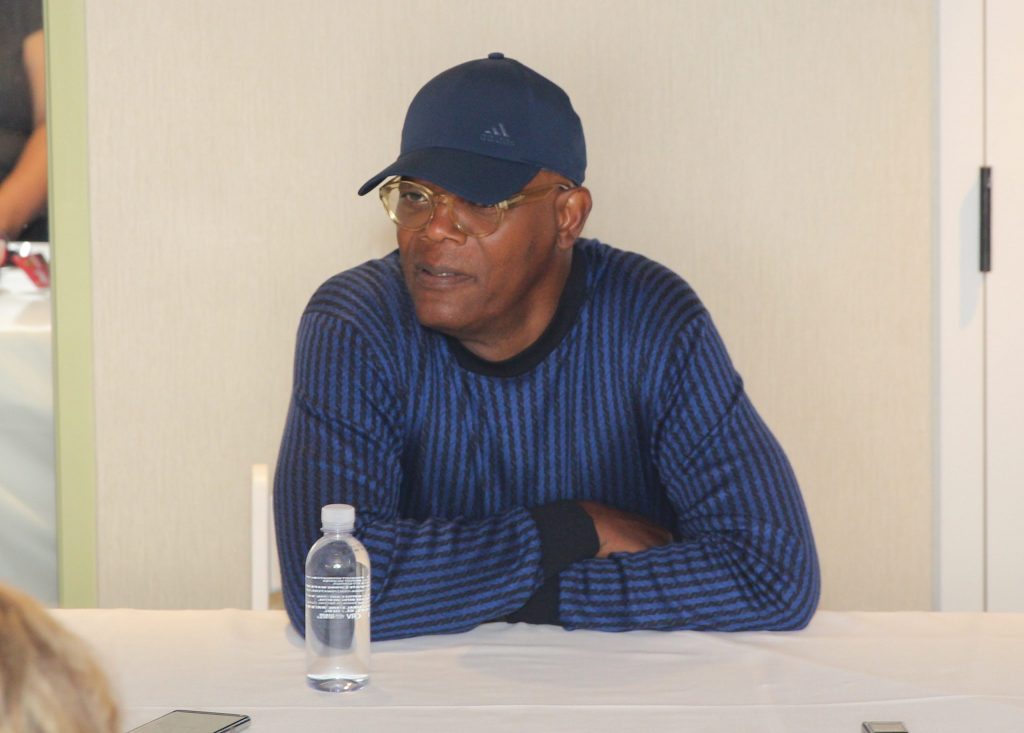 If you could voice a different character from Incredibles, which one would you be? “Edna is the dopest. Wise. Cool. Dry. Unaffected by the world.”

If you could freeze a moment in time, what would it be? “You know what, like the early seventies, I was in New York, 1976  Halloween, when we got to New York City when, you know, we started this marvelous journey that we, you know, were ready to conquer the world and be the best actors on the planet.”

What advice would you give to young actors just starting out?  “Just starting out, oh wow, do as much theater as you can do.  You know, fame is a drug that these people, young people now have, because it seems so accessible.  If you do enough, you know, you do enough online or you get enough likes, or people get enough eyes on you, you become famous for just no reason, or for reasons that aren’t worth talking about. But if you’re serious about it- go to New York.  Challenge yourself. On stage or off Broadway on Broadway, work with as many different kinds of actors and directors as you can learn the craft.  Upstage downstage, stage right stage left, being dominant, being submissive on stage. When you feel the energy of people, then you know okay, this works, that works, that doesn’t work, this works.  So that when you get to this place, or on a screen somewhere, you don’t have to question what you do, it feels right, you know, it works.”

You’re known for some language? And of course, in this conversation, he drops the F-bomb.

You have a lot of fun acting.  What do you do on long days to make it particularly fun? “Oh long days on movie sets, I watch movies, I watch a lot of Judge shows, during the day, when I’m on a movie set because they’re on all day.  So and I never miss Judy, because that’s my friend, Judy and I, me and Judy are like that. We like hanging out and have dinner together and stuff, so I watch judge shows, I watch movies.”

Who knew, friends with Judge Judy?! I would LOVE to be in the room with the two of them!

Oh my gosh, this interview goes into my files one of THEE BEST interviews. Not only did he give great answers to our questions, but in true Samuel L. Jackson form.

You can catch him as Frozone in Incredibles 2 in theaters this Friday, June 15th! 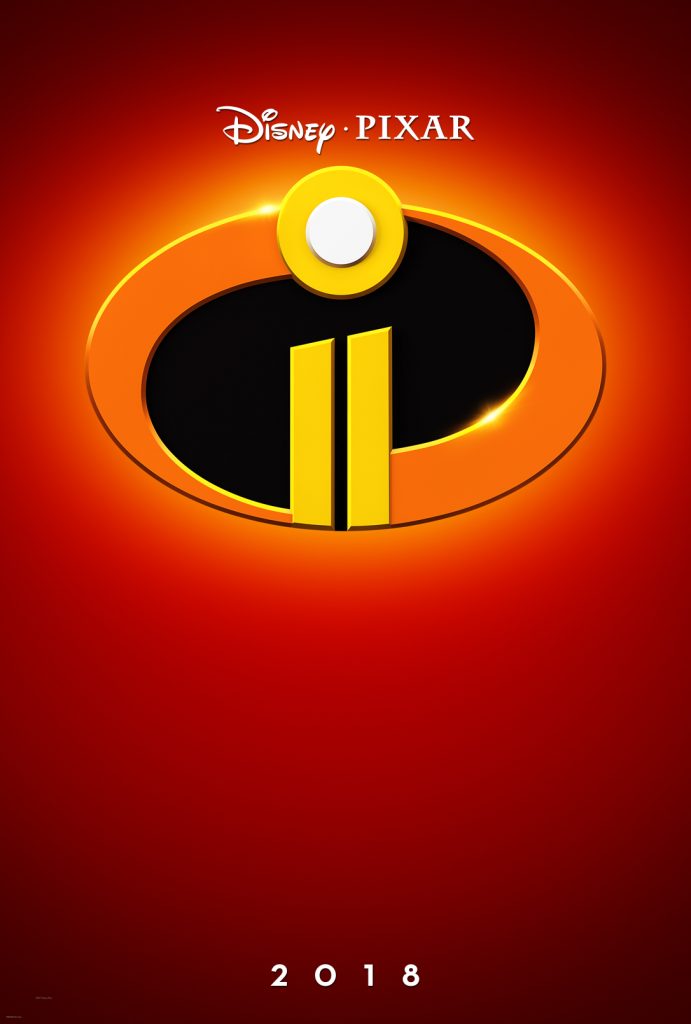