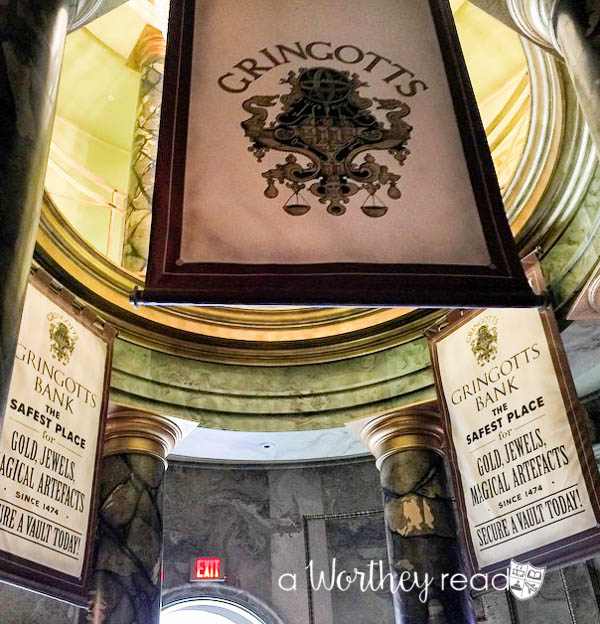 Universal Studios Resort is located in Orlando, Florida, right in the heart of the state, and is one of the most toured attractions in the country. The Wizarding World of Harry Potter is one of the main reasons for that, and it is a valid one. They have truly done an amazing job with recreating much of the Harry Potter world, down to even the tiny details.

There are two theme parks at Universal, (not counting their brand-new water park, Volcano Bay), Universal Studios and Islands of Adventure. They also purposefully (to many people’s wallets dismay) placed Harry Potter attractions in both parks, as well as having the Hogwarts Express (train ride from one park to the other park) connect the two sections. If you are there to spend most of your time in the Wizarding World, you don’t have to exit one park, and walk all the way around and through the other one. It’s a long walk, and both sections are located in the back of the parks, so this is a huge help. {however, you have to pay for both parks in order to experience the Harry Potter attractions in both parks, as well as riding Hogwarts Express}

So, how do you know which things to do and which things you can skip if you are limited on time for your visit and trying to fit it all in?

Here is a list of the top 9 things you’ve got to see, and then, if you have time to squeeze more in, that’s just icing on the cake! 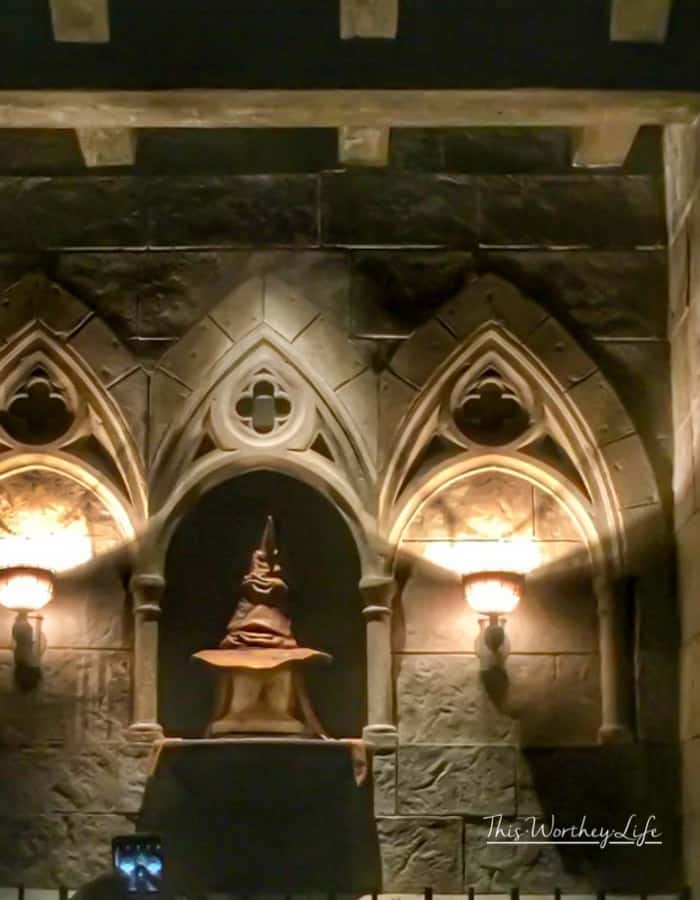 Hogwarts Castle. This is located at Islands of Adventure, and you can’t miss it. You can see the top of it from across the park, and as you enter the Harry Potter world from the side next to Jurassic Park island, it is truly a welcome sight. You will see the snow-covered roofs in Hogsmeade there, and then Hogwarts is one of the first things you’ll come to. I remember our first trip to Universal’s Harry Potter park. Everything looked and felt just as if you were in one of the Harry Potter movies.

Not only is the castle an iconic staple of Hogsmeade, but it’s also a ride!  The line for the ride alone is very well done, with a section that is like the greenhouse area at Hogwarts, and once inside the castle, there are tons of neat details to entertain you while you wait in the line. From the talking heads of the houses in paintings to the Sorting Hat himself, many famous things are located in the castle and the ride is the coolest. It is unlike any other ride, turning and twisting you all directions as you fly, through a Quidditch match, Hogwarts and more.

The Flight of the Hippogriff. This is a small roller coaster that is just across from Hogwarts Castle and even if you don’t like coasters because it’s a small one, it’s nothing wild, but it is a lot of fun to ride. If you refuse to ride one, then at least stand in the line with your family, because Hagrid’s house and the hippogriff himself are in the line area and you’ll want to take pictures. Both are really neat. 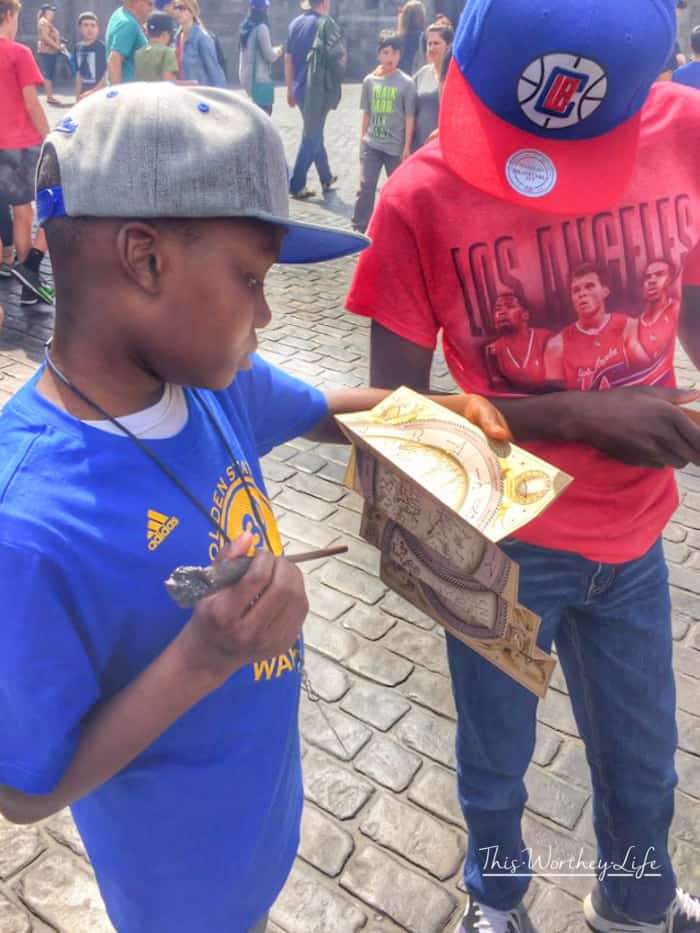 Ollivander’s Wand Shop. You can actually do this shop in both parks, and I would say that typically, the line for the one at Universal seems to be shorter than the one at Islands, as far as I have observed. There is a “show” to see, which is great, where Ollivander comes out and chooses a wizard from the group, and helps them find their own wand. On our first favorite, Zayd’n was chosen to come up and Mr. Ollivander helped him select a wand. He loved every minute of it! 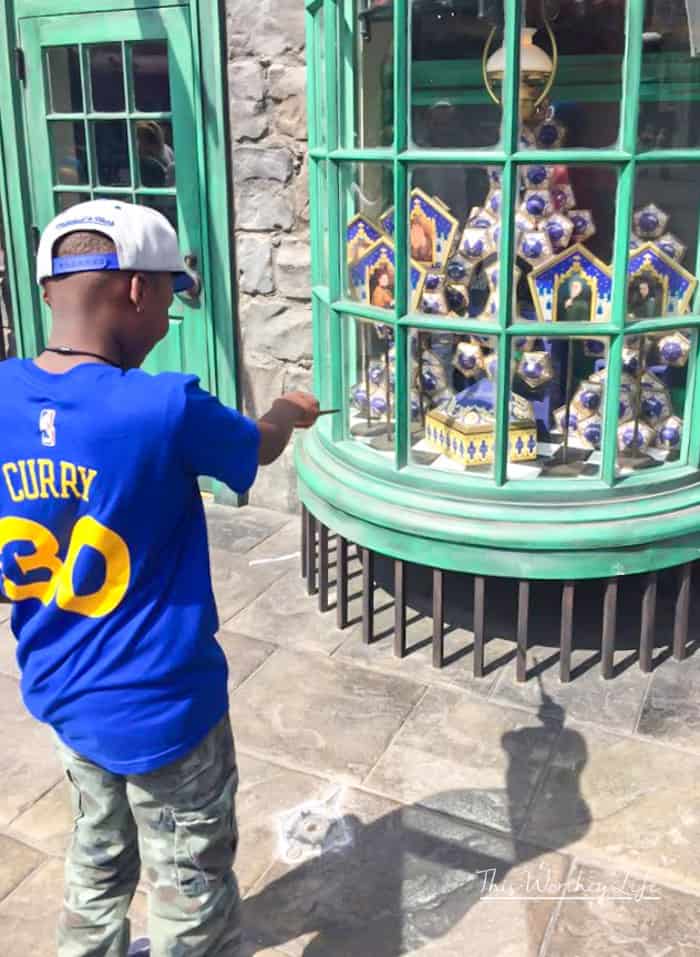 The shops are really great to see inside, with the neatest details, like an upside-down broom that is sweeping the ceiling and walls full of vintage looking wand boxes.

Both parks sell several types of wands, many from most of the characters, and some unique ones, as well as interactive wands that will allow you to cast “spells” in both parks at designated spots, for a very fun addition to your visit. {tip: if you have several children, only buy one interactive wand and have them take turns using it. }

The shop at Universal is located down the walk from Weasley’s Wizard shop and close to the Gringott’s Bank ride, and in Islands of Adventure, it’s in the middle of the Hogsmeade town, close to the Hogwarts Express. 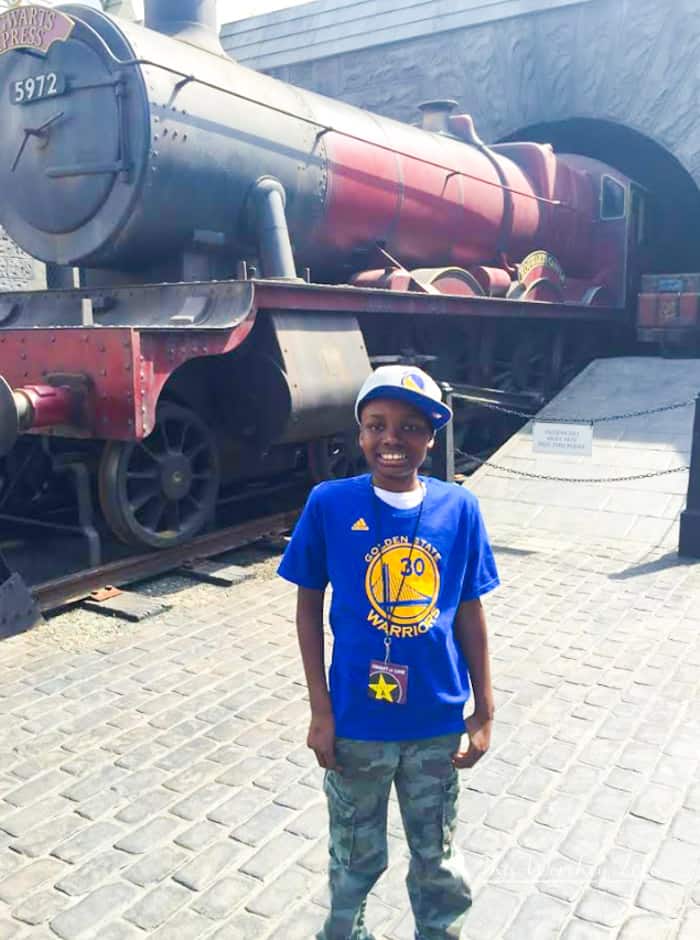 Hogwarts Express. This is the train ride I mentioned before, that takes you from one park into the other. You have to have tickets or passes on you for both parks, in order to enter and ride the train, so just be sure you purchase the right tickets when you come into the parks that day. On the Hogsmeade side there is also a Hogwarts Express train that you can take photos of, because otherwise getting them on the moving train is a little tricky if many people are in front of you in line. 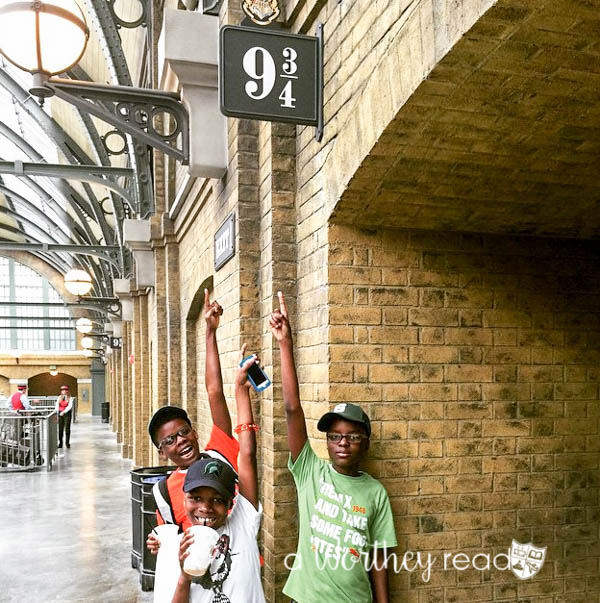 The train stations are very well done, and feel authentic, with small details that help tie them into the movies, and the way the line is laid out, even if it is long, it keeps you moving along the whole time.

Then, the actual train cars are super cool, and on each way across the ride is different. The windows “move” and you feel like you are on the train they rode and not just any old train. Some characters make appearances and you will really enjoy it. 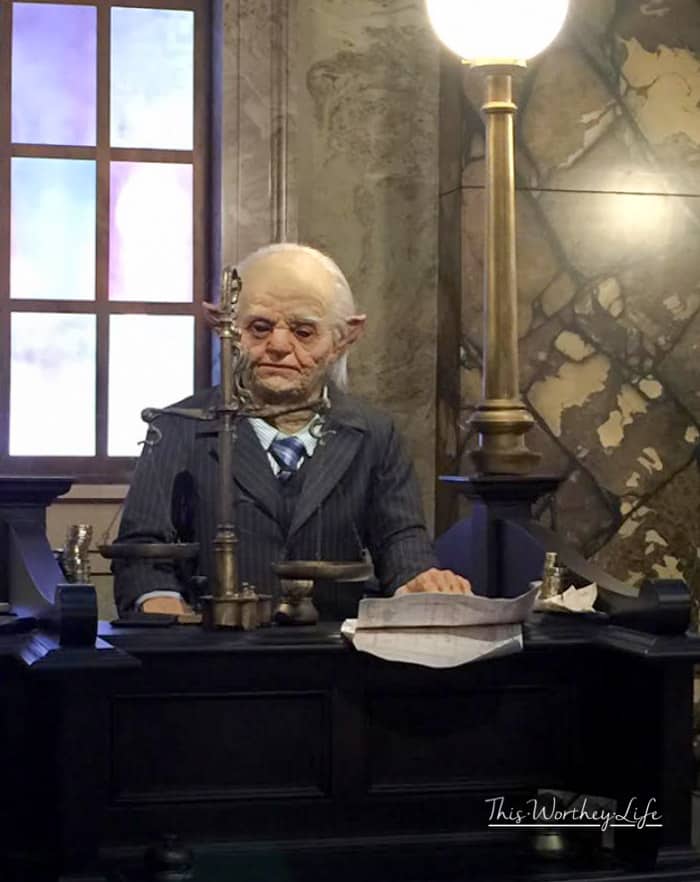 Gringott’s Bank Ride. This is my family’s favorite Potter thing out of both parks. The bank itself is easily the coolest thing to see and they have strategically placed it far back so that the view is not ruined for you until you are meant to see it. Perched on the top of the bank is the famous dragon who gives them a ride out in the movie, and it looks legit, let me tell you. When it is not too crowded, I love to just sit there and really study it. 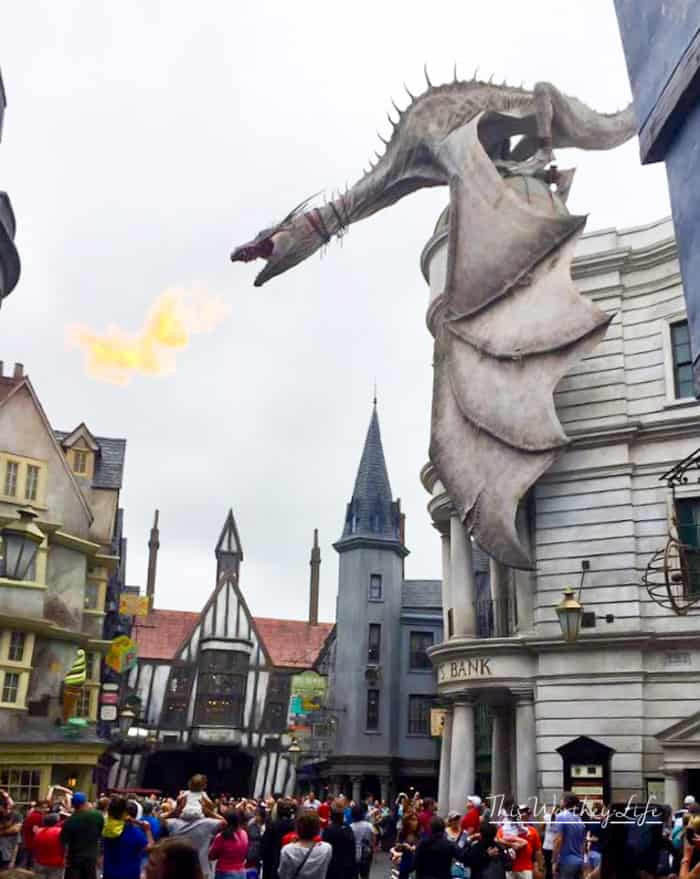 Then, in addition to the dragon, the bank sits at a twisted angle, and the building is so neat, both inside and out. The line for the ride is like the Hogwarts castle, it has tons of details throughout it to entertain you, and they even offer to take pictures for you at one point in the line. The main lobby part of the bank is fantastic, with the working goblins at the counters.

Then there is the ride. It is so much fun, combining an interactive screen and 4-D effects with a coaster, making for a unique ride experience. 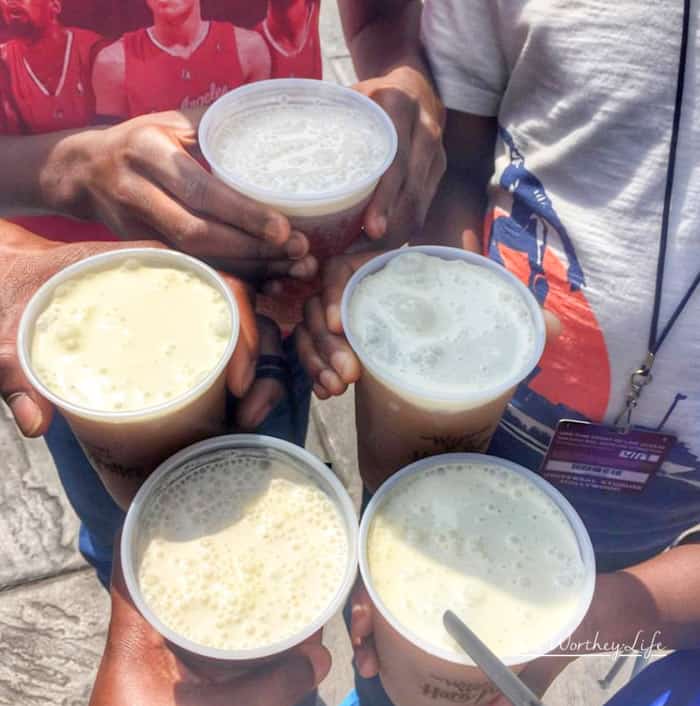 Butterbeer & other treats.  There are a few places in both parks to get yourself a butterbeer – in Hogsmeade at Islands of Adventure, there is a beer cart in the middle, which is the easiest place to get one. They make them frozen too, so being in Florida, this is a real treat. You have to try it at least once and chances are you will love it.

They do have lots of other fun Potter-type treats to purchase in both parks, like ice creams, cakes, fudge, all the famous candies from the movies and also other fun drinks. There is a fizzing fishy drink that has a mint flavor and blueberry juice pods in it, and it is so good. There are also a few fruity ones like a peach and an orange flavor, and they dip the rim of the glass in a cinnamon sugar that takes it over the top. Make sure you get yourself at least one treat on your visit because you won’t forget it. 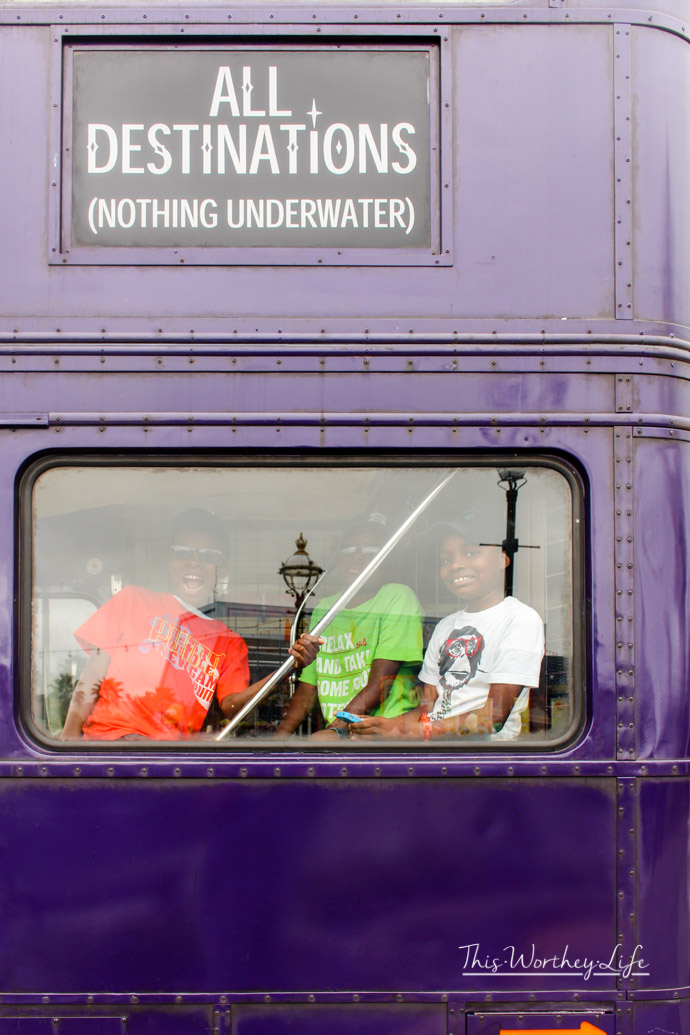 Knight Bus.  Outside Diagon Alley, and across the street in the London area in Universal Studios is where the Knight Bus sits. It is a clue for those who are looking for where to enter the Wizarding World, as they do a good job tucking it in and behind the main streets there. You can’t miss the purple two-story bus as you come down that street and the driver and his talking shrunken head will chat with you, and take photos if you choose to stand in the line. Sometimes the line is very minimal, too. 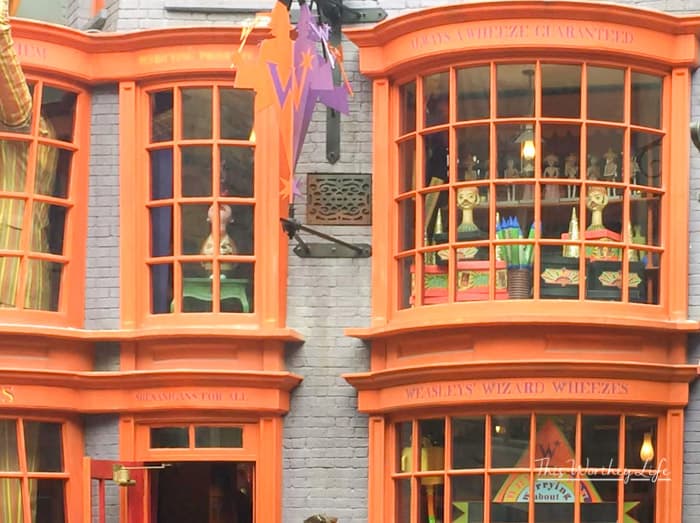 The shop windows.  This may seem like a silly thing to have on this list, but until you get there, you don’t truly understand the work and detail that went into designing this place. In both parks, there are several shop windows to see. Some of the shops are just fronts and you can’t enter them, but many are real shops too. Each window has a different theme, and so many of them have animated features to see. Violins playing themselves, a flying snitch, mandrake plants, and a few are spots for doing spells with your interactive wand. This is really the type of thing that makes you feel you’ve entered another world and makes your visit so much more special. 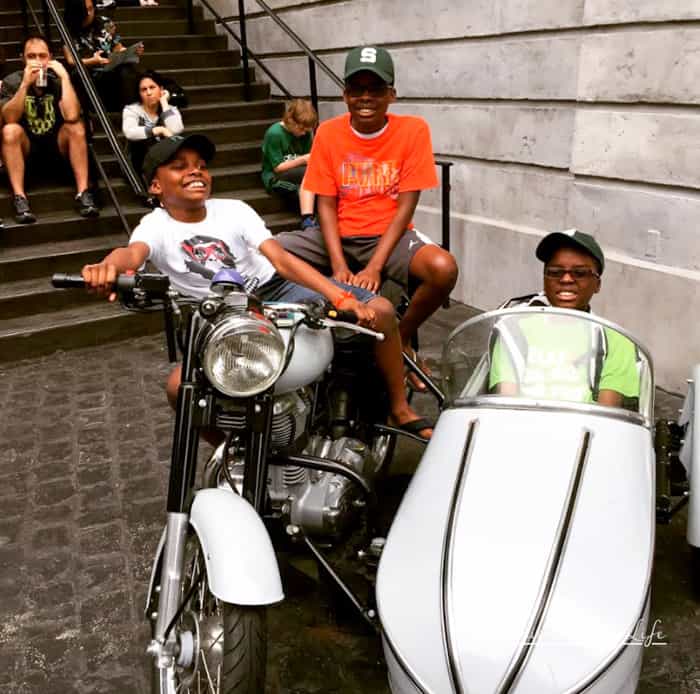 The dueling dragons. The dragons are both roller coasters that race each other and are located in the heart of Hogsmeade. They have been at Islands of Adventure for years and fit perfectly with the Harry Potter theme, so they are a classic to ride, but still give you the Potter feel you are looking for. Each coaster is different, and you will probably have a favorite one, one has a few more twists and turns than the other and one has longer, faster-feeling runs. There are times on the ride where you are alongside the other coaster, and times, when you feel like your feet, will hit their feet, and it is so much fun. The inside of the castle is a dark and creepy walk with skeletons and bones here and there, and when you sit in the front row, you are literally inside the dragon’s mouth. Pretty awesome. The rides are very smooth, too. Steel coasters that are inverted so your legs hang down, which gives a great flying feeling. 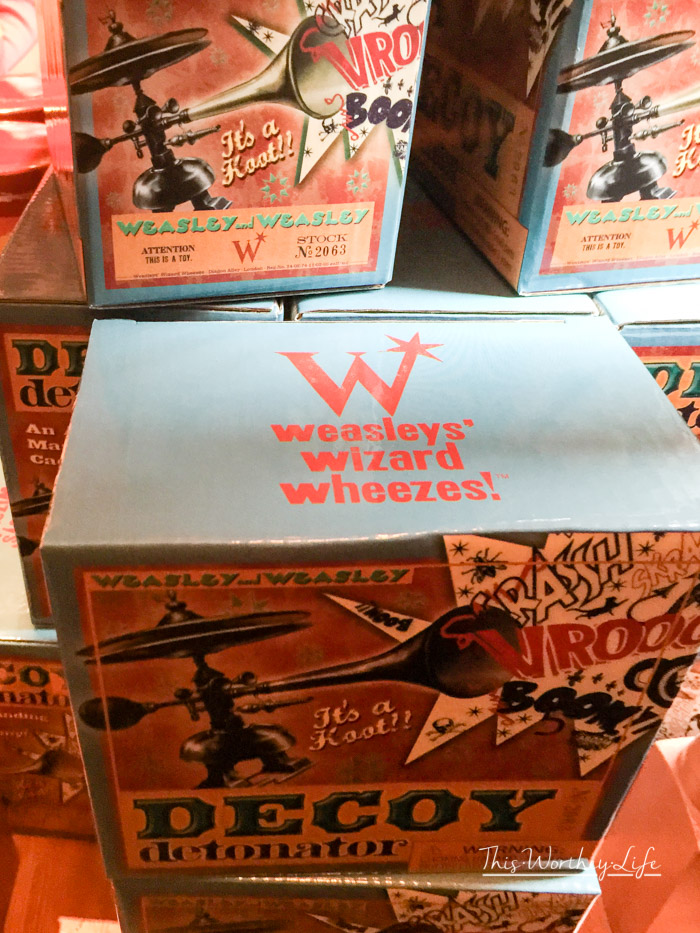 So, plan ahead for your visit, use the Universal phone app to help you along, and enjoy yourself -overall, the whole experience of visiting the Wizarding World will be a great one for you and your family and I hope you get to soak it all in and fit it all in!

Pin to your travel board for later!