I’m headed to L.A. this weekend for the A Wrinkle In Time Press Junket. While I’m there, I’m going to be interviewing Oprah, Ava, and a ton of other awesome people. Plus, doing some fun things with ABC. Read on to get all the details of my trip! #WrinkleInTimeEvent 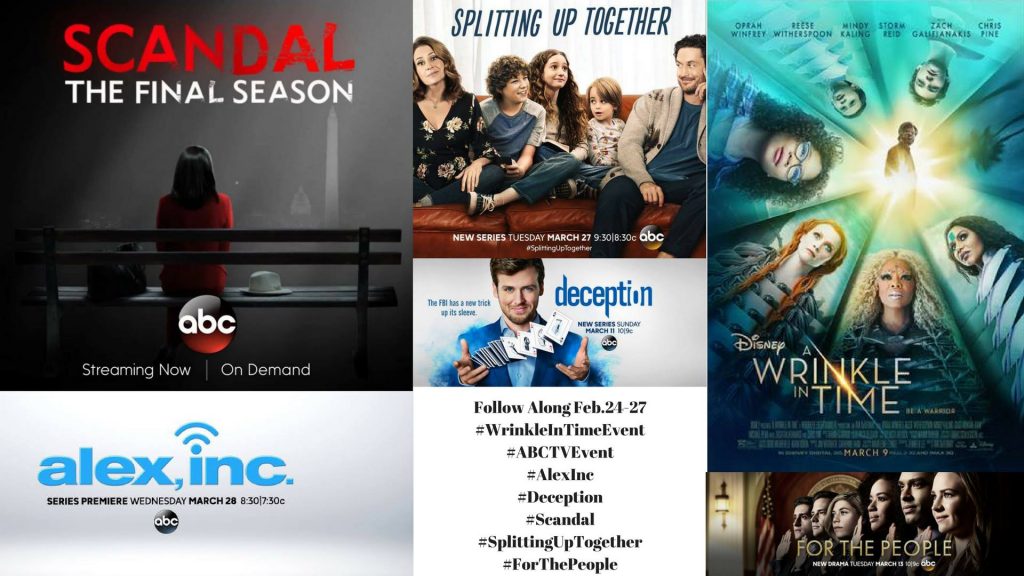 There are dreams we all put on our bucket list. One of the dreams on my bucket list is to make Oprah Winfrey.

And next week that dream is going to come true! I’m still pinching myself to make sure it’s real because it really is a once-in-a-lifetime opportunity. OPRAH guys?!!!! 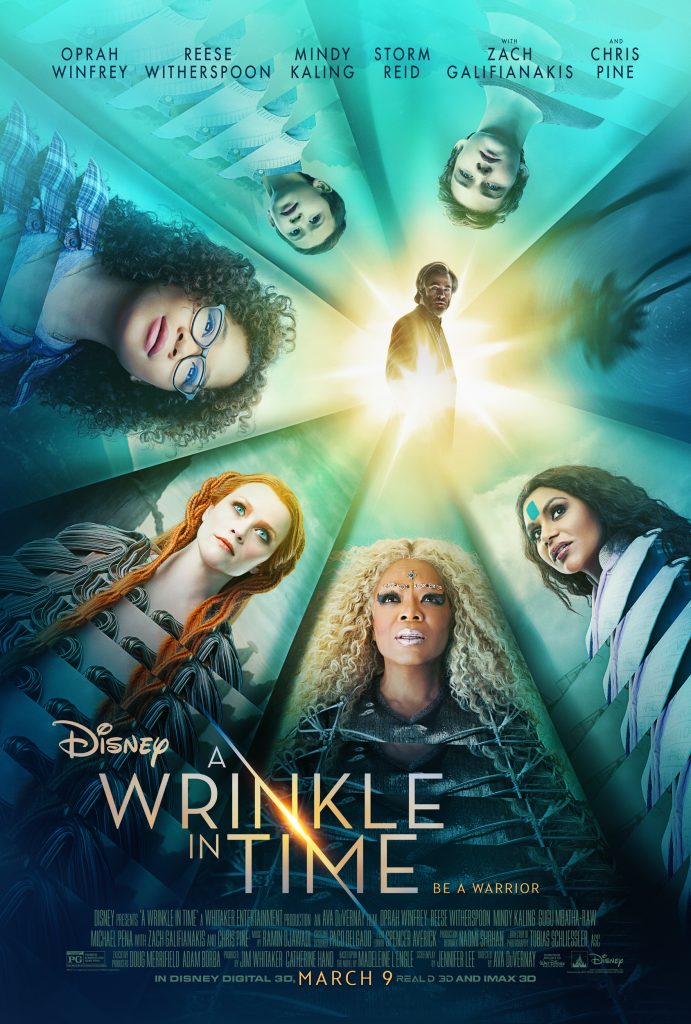 I, along with 24 of my blogger friends are going to L.A this weekend for Disney’s Wrinkle in Time premiere and press junket. While we are in L.A., we will be attending the premiere of A Wrinkle in Time, as well as interviewing most of the cast. 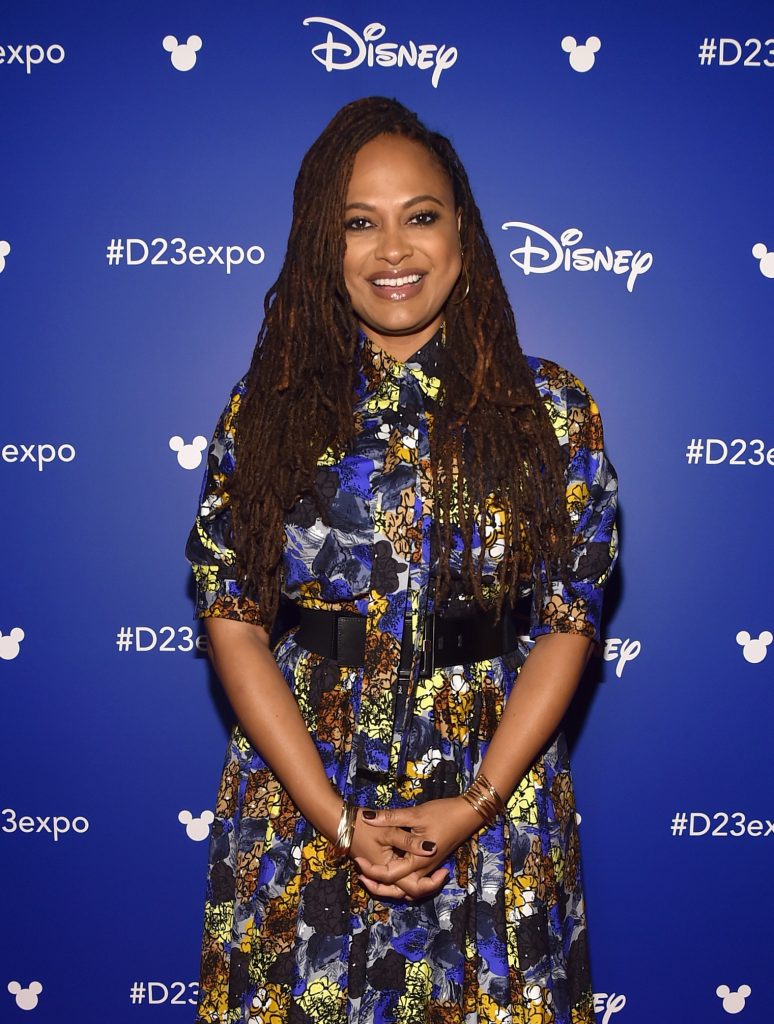 Which is another bucket list dream- to meet Ava DuVernay! I LOVED her work in Selma and 13th. And then to hear that she reached out to Sade to ask her about creating an original song for A Wrinkle In Time is amazing (I love Sade!). 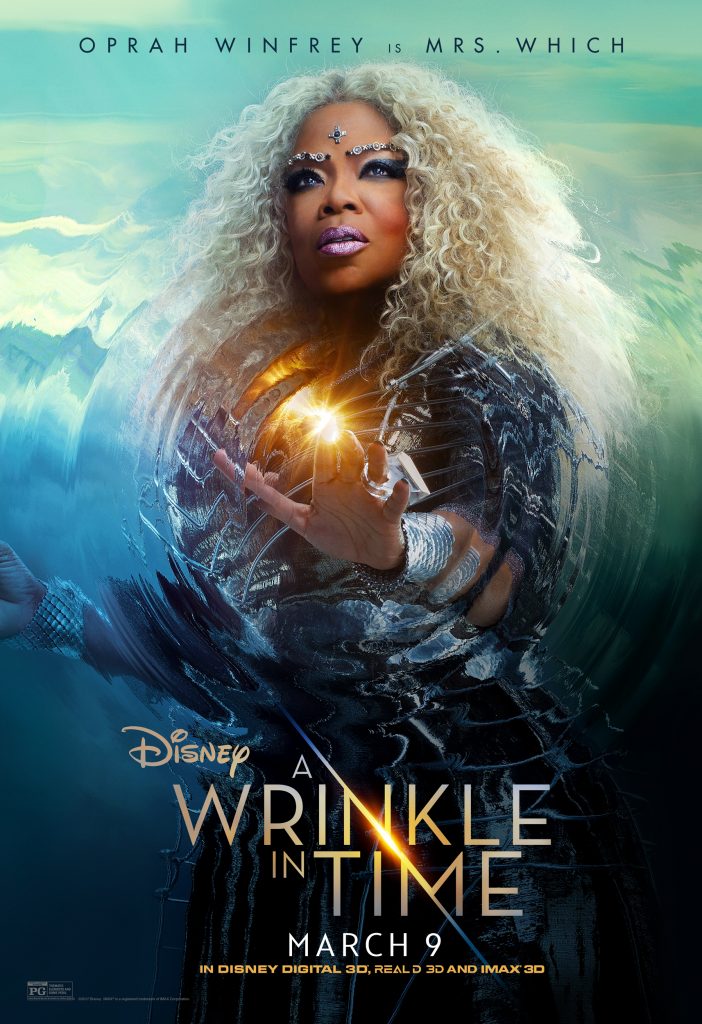 Here is a list of who we will be interviewing (so if you have questions, let me know!) 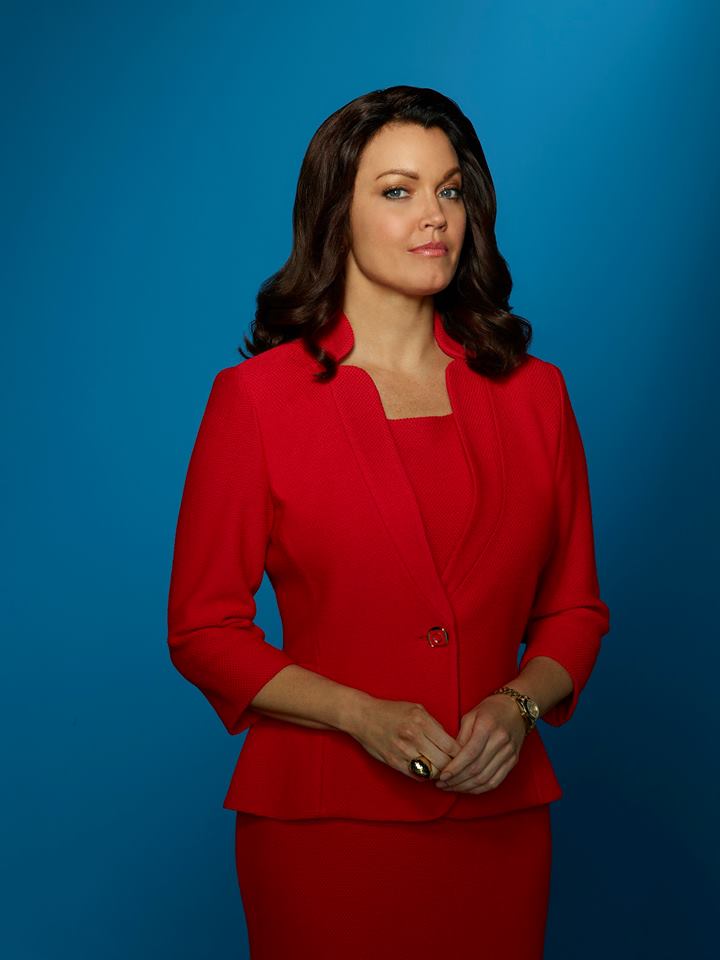 We will end our Wrinkle In Time press junket with the lovely Bellamy Young. Most of us know her as Mellie Grant from “Scandal”.   She also plays a role in A Wrinkle In Time as “Camazotz Mom”.

“SCANDAL” (Thursdays from 9:00-10:00 p.m. ET) #Scandal #TGIT
As a staple in the Shonda Rhimes programming block known as “TGIT,” the Washington, D.C. drama follows a political fixer named Olivia Pope (Kerry Washington) and her team of associates who sacrifice their time, and often their morals, to “handle” unimaginable crises affecting the nation’s elite. Throughout the last six seasons, “Scandal” has used OMG storytelling to explore political culture, gender disparities, sexual politics and race in America.

The seventh and monumental final season of “Scandal” will return with a brand new White House administration that includes Mellie Grant (Bellamy Young) as the first female president of the United States, Cyrus Beane (Jeff Perry) as the vice president, and Olivia Pope as Mellie’s chief of staff. Olivia also doubles as the head of the newly reinstated top-secret government agency B6-13, with Jake Ballard (Scott Foley) working by her side. Expectant mother Quinn Perkins (Katie Lowes) is now head of the newly inherited crisis management firm QPA (Quinn Perkins and Associates), with Abby Whelan (Darby Stanchfield) as her right-hand woman, and Huck (Guillermo Diaz) and Charlie (George Newbern) as her dedicated gladiators. Meanwhile, former POTUS Fitzgerald Grant III (Tony Goldwyn) is focused on maintaining his legacy by building his library and foundation with the help of Marcus Walker (Cornelius Smith Jr.). And although Rowan Pope’s (Joe Morton) role reversal with Olivia initially proves to be a struggle, he always has something up his sleeve. David Rosen (Josh Malina) remains the attorney general of the United States. 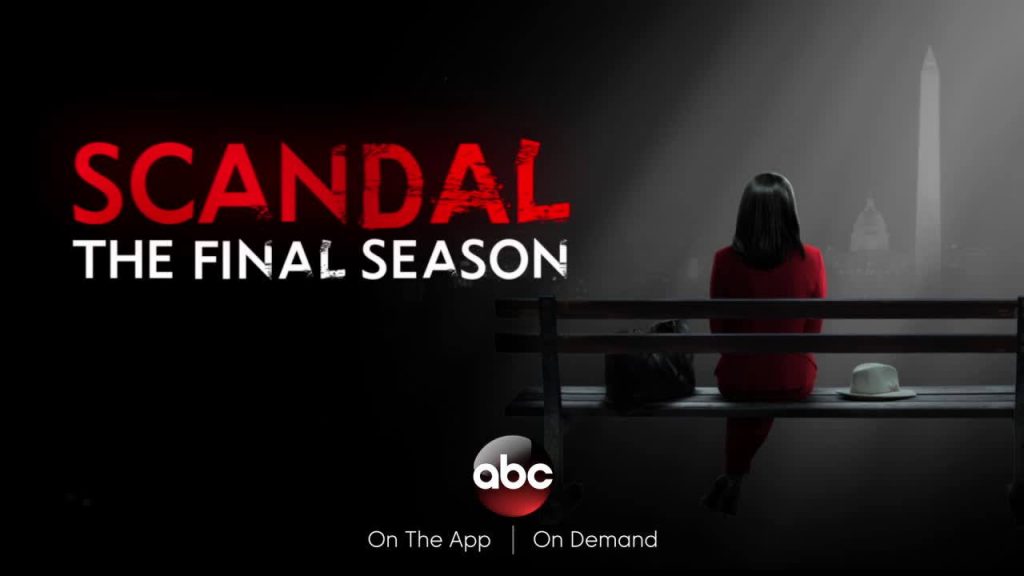 Also while we’re in L.A. we will be screening several new shows comes to ABC.

FOR THE PEOPLE (series premiere Tuesday, March 13 at 10|9c)  #ForThePeople

We will be interviewing: “For The People” Q&A and photos with Jasmin Savoy Brown (“Allison Adams”), Susannah Flood (“Kate Littlejohn”) and Wesam Keesh (“Jay Simmons”)

Set in the United States District Court for the Southern District of New York (a.k.a. “The Mother Court”), the new Shondaland series show follows six talented young lawyers working on opposite sides of the law and handling the most high-profile and high-stakes federal cases in the country.

These young lawyers will be put to the test both personally and professionally as their lives intersect in and out of America’s most prestigious trial court.

The series from ABC Studios is created by Shondaland’s Paul William Davies, who executive produces alongside Shonda Rhimes, Betsy Beers and Tom Verica.

We will be interviewing:  “Deception” Q&A and photos with Creator and Executive Producer Chris Fedak & Co-Producer David Kwong

When his career is ruined by scandal, superstar magician Cameron Black has only one place to turn to practice his art of deception, influence and illusion – the FBI. Using every trick in the book and inventing new ones, he will help the government catch the world’s most elusive criminals while staging the biggest illusions of his career. The series is from writer/executive producer Chris Fedak (“Chuck”) and executive producers Greg Berlanti, Martin Gero and Sarah Schechter. Illusionist David Kwong (“Now You See Me”) will co-produce.

The series is from Berlanti Productions and Quinn’s House in association with Warner Bros. Television. “Deception” is directed by David Nutter, who is also the executive producer. 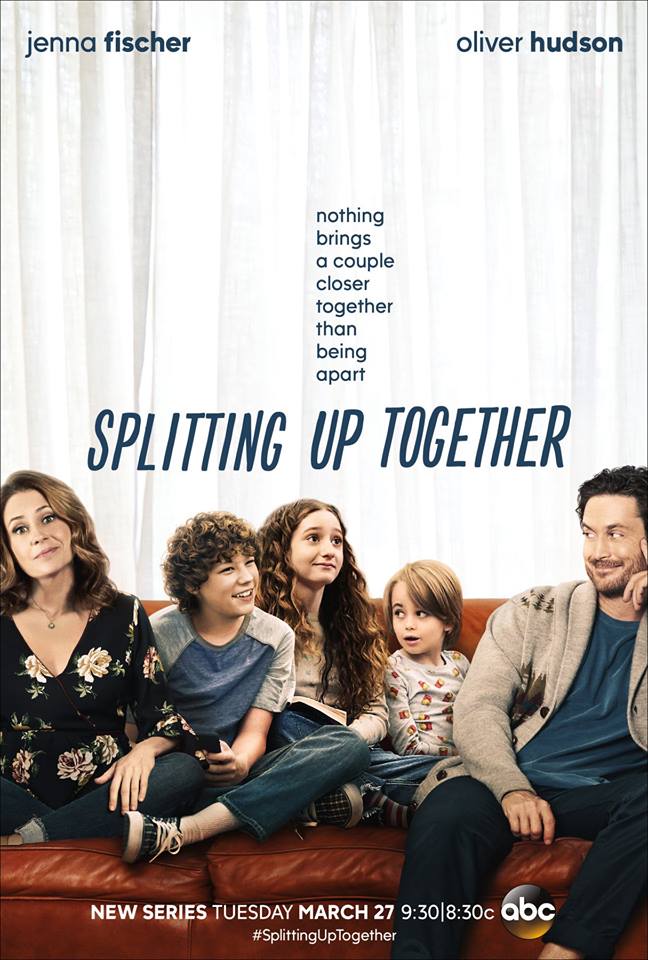 SPLITTING UP TOGETHER (premiering Tuesday 3/27 at 9:30|8:30c after the premiere of”Roseanne”)   #SplittingUpTogether

We will be interviewing:  “Splitting Up Together” Q&A and photos with Oliver Hudson (“Martin”), Lindsay Price (“Camille”) and Executive Producer/Showrunner Emily Kapnek

Based on the Danish series, “Splitting Up Together” is the story of a couple (Jenna Fischer, “The Office,” and Oliver Hudson, “Scream Queens”) whose marriage is reignited by their divorce. Emily Kapnek (“Suburgatory”) writes and serves as executive producer of this new comedy, along with Ellen DeGeneres.
The series stars Jenna Fischer as Lena, Oliver Hudson as Martin, Bobby Lee as Arthur, Diane Farr as Maya, Lindsay Price as Camille, Olivia Keville as Mae, Van Crosby as Mason and Sander Thomas as Milo.
Jeff Kleeman, Mette Heeno, Mie Andreasen and Hella Joof are also executive producers of SPLITTING UP TOGETHER, which is based on the original series created by Heeno. It is produced by A Very Good Production and Piece of Pie Productions in association with Warner Bros. Television. Dean Holland directed the pilot. 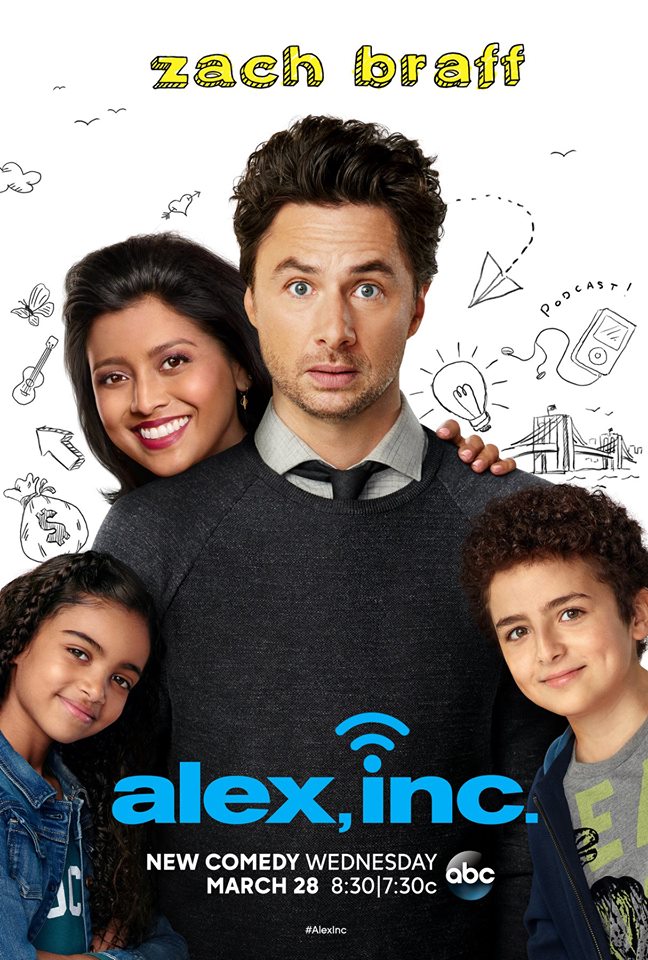 Based on Alex Blumberg’s successful podcast “StartUp,” comedy series “Alex, Inc.” is all about the things that happen – the good, the bad and the ugly – when a journalist and family man quits his job to start his own company. He quickly discovers it’s going to be a lot harder than he thought.

Alex Schuman is a successful radio producer with a whip-smart, public defender wife, Arunima (aka “Rooni”) and two confident, quirky children, Ben and Soraya. After years of making the kind of content that brings no creative fulfillment, in what most would consider an early mid-life crisis, Alex decides to risk everything – including his savings – to start his own business. Armed only with the help of his overenthusiastic producer, Deirdre, and his fast-talking, unemployed second cousin, Eddie, Alex navigates the crazy world of start-ups while trying to keep his marriage and family a priority.

Be sure you’re following me on twitter @tatanishapw and IG @tatanishapw so you can see all the action in real-time and ton of the behind the scenes stuff! You can also follow along using #WrinkleInTimeEvent as well as#ABCTVEvent

Check out the official trailer for A Wrinkle In Time: