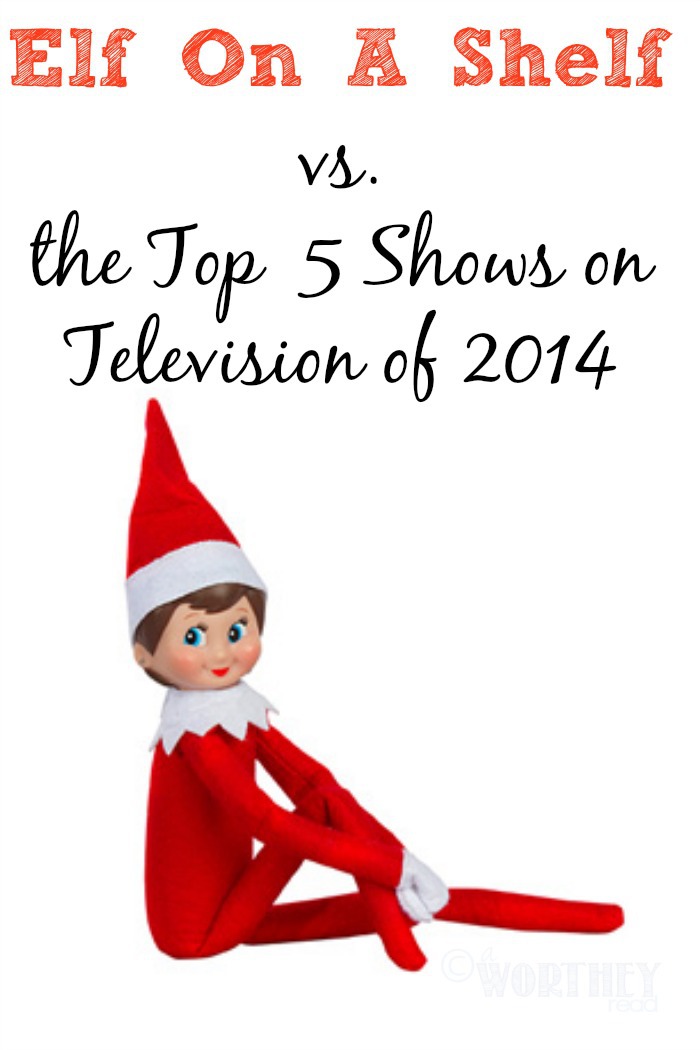 Okay, Elf. We know you’re the man during the month of December, when you do that thing that you do. Because sitting on a shelf is serious business (man, your tiny elf bottom must be seriously sore). As an adult, I am cynical. But let’s not be foolish here. We acknowledge Elf is less germane than the Big Guy with the oversized bag of goodies slung across his broad shoulders, but still. For millions of young girls and boys, Elf gives them a reason to get out of bed in the morning, and find anew each day the Christmas Holiday Spirit. For that alone we, the mothers and fathers of the world, thank you.

With that same Christmas Spirit, or rather a slightly skewed and off kilter kind of spirit, I offer these slightly imaginative variations fashioned by non-Christmassy themes. So, read on dear reader and be very amused.

I ask you, one and all, how would Elf’s cheery disposition fare if he were thrown into the rowdy ruckus world of Sons of Anarchy? Or tossed head first into the fray of a post-Apocalyptic zombieland called The Walking Dead? Better yet, Mr. Elf, would your rosy-cheeked and bright eyed exterior remain as cool as the North Pole environs from which you hail were you under the icy and intense gaze of tenacious scrutiny belonging to none other than Olivia Pope? And Ms. Pope aside, how would Elf fare pitted against a litany of Janus-faced players on ABC’s Scandal? Tis’ true, Snow Boy, we’re going there. 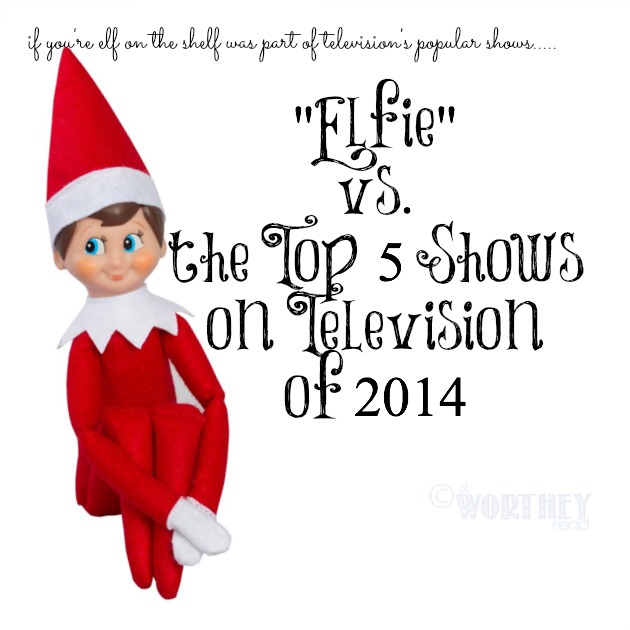 Yup, it is all candy canes and poinsettias until someone forces you out of your comfort zone, and that is exactly what is going down. We’re taking the mittens off and playing hard ball (i.e. our own twisted fan fiction kind of hardball). We are taking our favorite Yule Tide elf and putting him into the Top 5 T.V. shows of 2014. Why? Just because, and it makes for great holiday ELFtainment! And really, that’s all the justification we need. 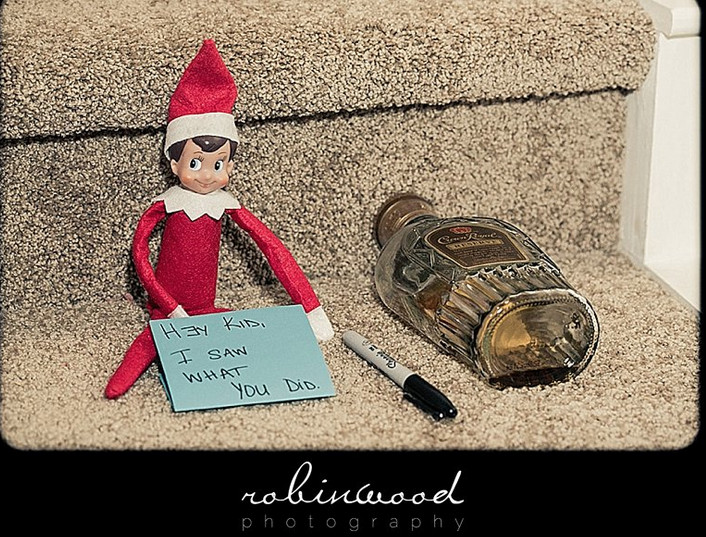 Elfie is sipping his third or fourth Dirty Martini. He’s wearing a crumpled, yet tight-fitted gray suit with a pristine, white, spread collar shirt. Across the semi-crowded room Don Draper has his eyes trained on Elfie’s pretty, doll-faced wife. Don briefly met her at last year’s Christmas party and, like always, he wants what he shouldn’t want. Elfie came on board a few months prior from Cutler Gleason and Chaough (predictable right?). Which gives Don enough reason to have a bit of sport this evening, no? He waits. Elfie goes to freshen up his wife’s drink. So, there she is, temporarily alone and vulnerable. The great white shark that is Don Draper makes his move.

He approaches port side, saying, “What kind of man leaves his most prized possession alone to fend for herself in a room filled with inebriated and reckless endangerment?” He looks directly in her eyes. “Hi, I’m Don Draper,” he says, extending a manicured paw. They shake hands. Draper holds her hand in his a beat too long. Mr. Draper‘s eyes suspend Mrs. Elfie’s defenses, for she is out of her depth, and this composition is quite unfamiliar, yet exciting territory. She smiles demurely, utters with fragile confidence, “Good to meet you Mr. Draper, I’m Elaina. Don, still holding her small, delicate, warm hand in his, continues, “I noticed you have been watching me all evening. In your heart you already know what you want. In your mind, the act has already been consummated.” Mrs. Elfie doesn’t disagree. “I know a hungry woman when I see one, and darling, you’re absolutely starving.” Her eyes haven’t left his. Elaina looks down. Her hand is still helplessly in his. He continues, “So, what’s it going to take for us to arrive in the same car at the same place, naked and wanting, on the same bed?” She blushes at this and inhales sharply at his unmasked words. A wolfish smile glistens upon his lips. “One more drink or a kiss you’ve already perfected and performed since last year’s Christmas soiree?”

The spell is broken; Mr. Elf has arrived with drinks. He eyes the situation correctly and sees his pretty wife on tenterhooks and floundering badly. Should Elfie man up and thwart this would be dalliance by: 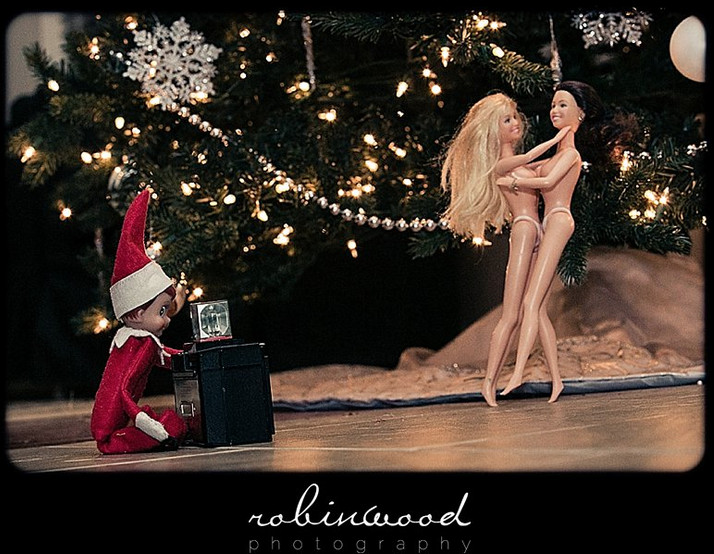 4. Orange Is the New Black (Netflix)

Would it be fair to insinuate Elf on the Shelf into an all (mostly) woman’s prison storyline? Or would our Elf’s androgyny make him an ideal candidate for such a scenario to be realistic or at least plausible? I like to think our Elf could be a paler version of Sophia Burset’s (Laverne Cox) character. Anyway, in my mind I think Elf would fit into the OITNB cast quite swimmingly. The cast as-is is rife with a plethora of “out there” characters, and so the sedate bashfulness of an elf with not a lot of real world (or grime world) experience would exist as an interesting counterbalance, to say the least.

Here’s what we know. Piper was sent to Litchfield Woman’s Prison for running drug money for a friend and given a 15-month prison sentence. So, here’s my question, what crime against humanity would our dear Elf on the Shelf commit and why to land him in prison? I have a few ideas, but I am sure you guys and gals can do so much better than moi. So, have at it. 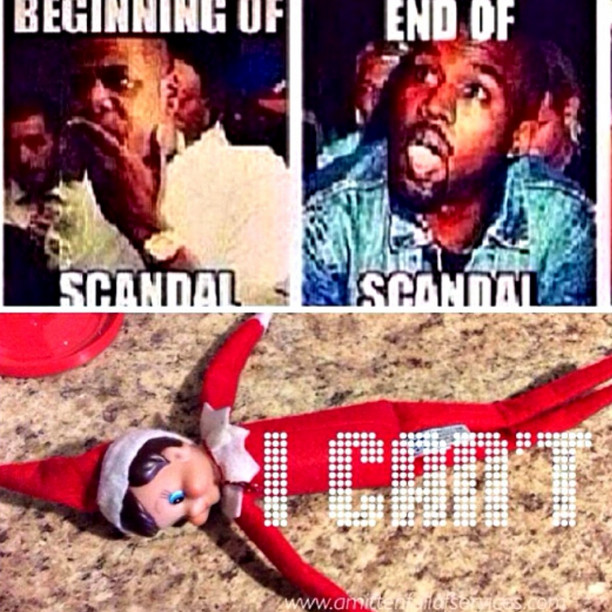 {credit A Mitten Full Of Savings}

Everyone knows Elf is famous for not saying much (more like zilch) and everyone also knows the hit show Scandal is all about talking a mile a minute. Show creator Shonda Rimes is big on grandiose hyper-paced dialogue which pulls at the emotional heartstrings of millions of viewers. But I have a feeling Elf may have what it takes to fit in OPA like a long lost CIA spy.

Everyone has a dark side, right? And perhaps Elf isn’t talking for a reason. It could be he has seen some things, and done some things, which make him the perfect Noel operative. I mean really, how else would he have learned to move from one place to another with the greatest of ease?

Imagine some kid trying to entice Elf to give up the goods on St. Nick? Or even better, do you think for one second Elf would get your name on the Nice List and scratch it from the Naughty List under pressure? No sir, no way. I think there is much more to Elf than meets the eye. And if some wayward girl or boy where to attempt to compromise Elf’s The Feast of Lights principles, our little guy may have to go all Huck on ‘em . Know what I mean? Then, after the deed is done report to Santa Central that “it’s handled”.

Here are few torture techniques our favorite North Pole spook may have perfected from his time with the CIIA to help protect the Big Man in the red pajamas over the years:

9. Ever been used as a human chimney sweep? Soots to be you.

6. Dipping your tootsies in hot green and red candlewax.

5.. Hanging Mistletoe over your head and parading you around an old folk’s home for 72-hours non-stop.

4. had to eat 50-pounds of stale Gingersnaps without milk? Eat up!

2. Guess what? You just joined the local Polar Bear club. Hope you like skinny dipping in December.

1. You know that weird film The Human Centipede? Now imagine you, some needle and thread, and eight reindeer with retention issues. Guess who the caboose is? 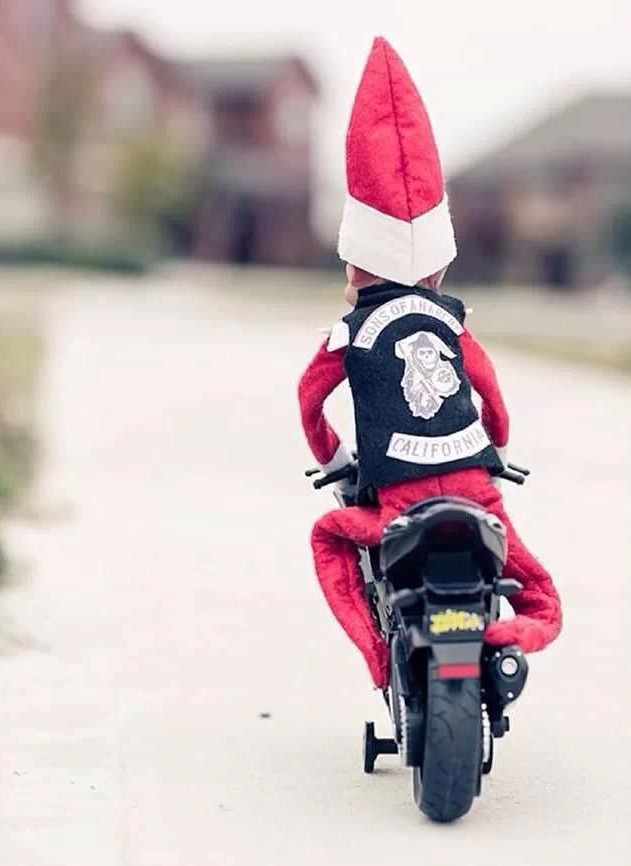 Considering all of the lost souls on FX’s Sons of Anarchy, it is hard to imagine Elf having much of a chance bringing a bit of Christmas cheer to this den of snakes and dyed-in-the-wool ruffians. But in reality, just maybe, Elf is exactly what the SOA players need. Perhaps no shoulder to lean on? When the guilt of murdering one’s stepfather becomes a burden too great to bear alone, how about a kind and genteel dose of the kind and gentle? Or, when you haven’t been very kind and forgiving. How about those times when the indomitable matriarch that is your mother culls the heard and knocks off your wife? There are secrets so inhumane only the unknowing can keep them. And perhaps, justifiably so, for there are places where kind and loving elves shouldn’t tread. Where labels like good and bad are impossible to quantify: because in the minds of the mentally disturbed there is justification for every heinous act and every evil deed committed.

In summation, considering how “charming” our Elf would he would make a fine addition to the citizenry of Charming, California? Or is there an act, if perpetrated against our nigh perfect North Pole citizen, which would make him an equal in realm of SOA?

Following are several reasons we think Elf would go over to the “dark side,” and perhaps never return:

One would think riding a motorcycle would be more comfortable than surfing shelves for an entire month, but what do I know?

In a post-apocalyptic, zombie infested hinterland the only good girls and boys are the girls and boys who manage to stay alive. So, no need to festoon your temporary shelter with Christmas lights ‘cause Christmas has been cancelled. In this new, dismal reality the meaning of life is “Kill a zombie and carry on.” Don’t feel bad though, the undead aren’t people: zombies are but obstacles to be surmounted and removed from one’s path to enlightenment. Or maybe Zombies are hollow caricatures; reminders of what we lose when we gravitate towards barbarity over mistletoe.

So, in the spirit of survival, let me introduce “Elf the Zombie Slayer.” Think of this new elf as a cross between LOTR’s Legolas and Ezio A. D. Firenze of Assassin’s Creed fame.

In ways, Elf would be worse than The Governor and better than Rick. Elf would have held the prison and thus avoided the deception and cannibalistic cruelty of Terminus. Elf’s weapons of choice would be antler-handled knives and twin Uzis spewing forth cold forged righteousness. Elf would don a tunic crafted from the leather of fallen reindeer. He would also wield a silver staff and call it Light Bringer. Yes, I am getting carried away. WHEW!

Ever since The Walking Dead sprang on the scene, viewers have lamented the demise of some of their favorite characters. “BETH! OH NO NOT BETH!” Does that sound familiar?

Let’s play a game and name it life for life. Below I will let you chose who lives and then you tell me the name of a character that dies in their stead.

Feel better? Of course you do. Stay tuned for our next Elf on the Shelf fun thing.

If you need more ideas for Elf on the Shelf (like where you take a few moments to actually plan it out,

) then check out my other blog for a ton of great Elf on the Shelf ideas, including:

And if your looking for Adult Elf on the Shelf ideas, I have you covered as well: