Not only that, but you’ll also get free printables for a Harry Potter Movie Bingo night.

These printables are great for a Harry Potter movie bing night – all you need are the snacks.

For even more fun ideas, check out my tips on making The Ultimate Popcorn Bar so everyone can have their snacks. 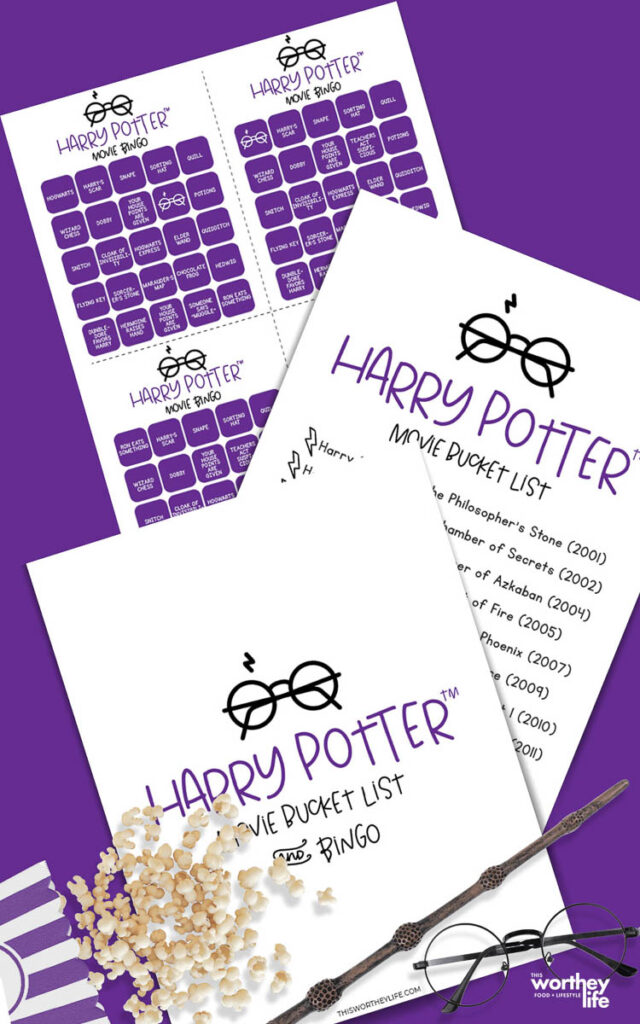 Most people have seen all the Harry Potter movies, but some of you may be missing a few.

The whole point of this free movie printable list is to make sure you don’t miss one of the Harry Potter movies.

There is a total of eight movies (and seven books). The last book, Harry Potter and the Deathly Hallows, was split into two.

While you can watch them out of order if you want to, it’s important to note this. — watching them in order is an easier way to follow the story.

Each movie carries over something from the prior one, so knowing all your Harry Potter trivia is critical! 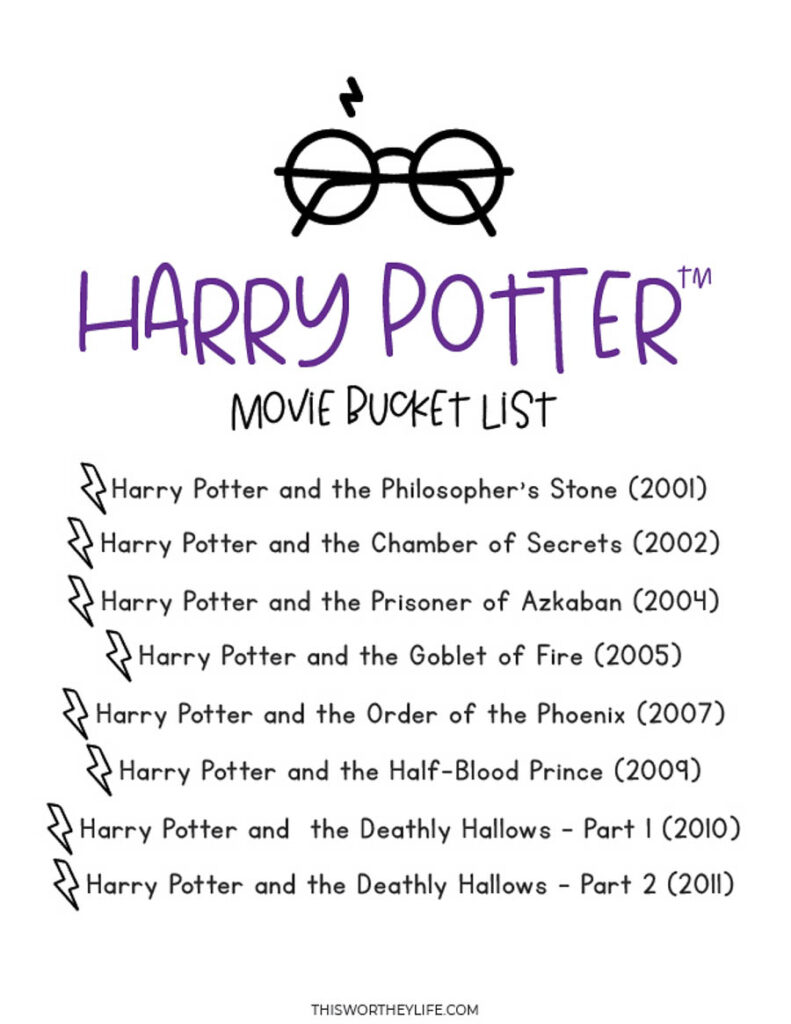 Here are the Harry Potter movies in order:

Where can I watch all of the Harry Potter movies?

There are a few places you can watch all of them.

First, you can purchase the Harry Potter box collection.

You can watch the eight-series collection on Amazon Prime.

Peacock is a streaming service with the entire Harry Potter movie series.

HBO used to house the Harry Potter movie series but lost the rights to stream it.

Watching Harry Potter online on sites like 123movies is not a reliable way to watch without issues, so keep that in mind. 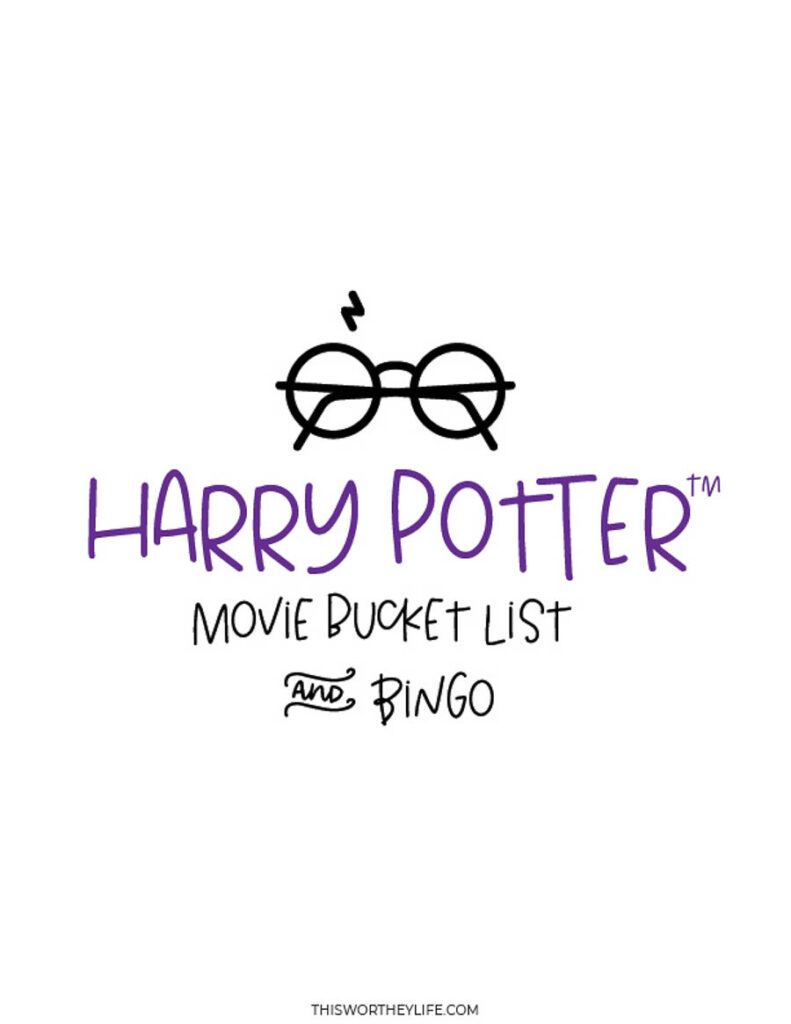 Don’t forget to print out the movie Bingo printables as well!

These are super fun and can be played with any Harry Potter movie.

Just print, get some M&M’s or other movie snacks to use as markers, and cover up the Bingo squares anytime you see a match.

You’ll also want to get some EXTRA movie snacks because you’ll want to fill your belly while binging all the Harry Potter movies.

Who will get a Bingo first?

It will be the person watching the movies – and paying attention! 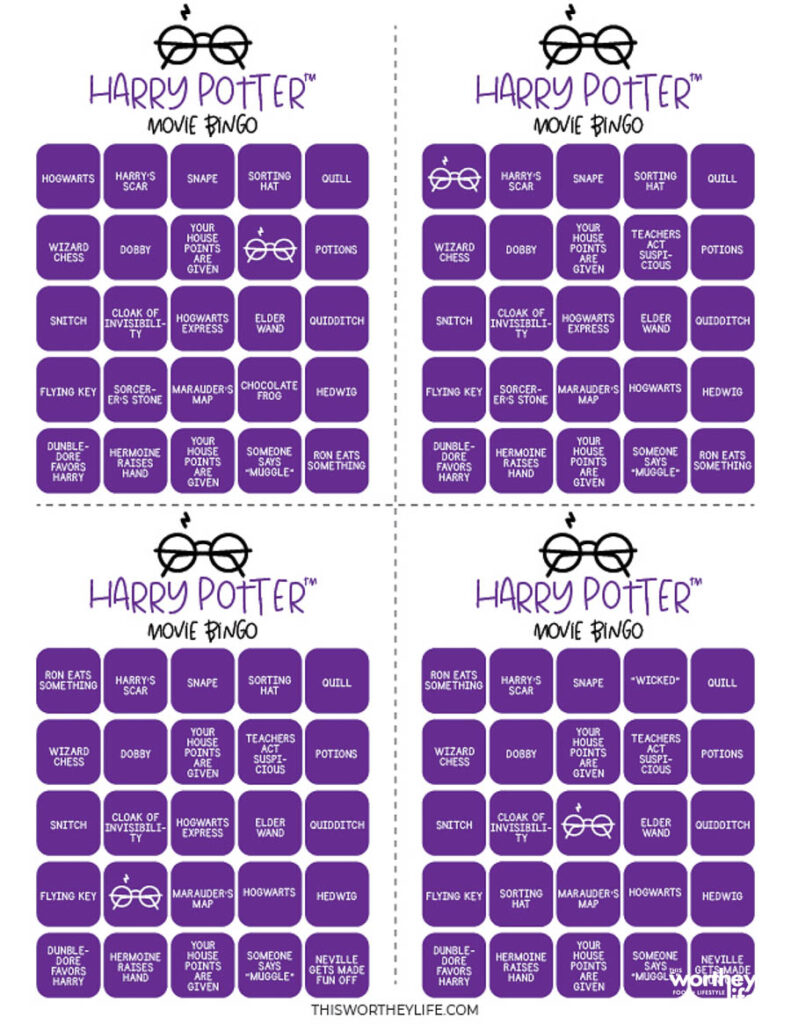 Once you print out the Bingo cards, it’s game on!

It’s a great idea to have a prize or two for the winners.

This could be something as simple: the person who wins doesn’t have to clean up anything after the movie night binge, or they get to run to the store and pick out some of the best movie snacks.

Playing this movie bingo game while having a Harry Potter marathon is a great family activity this Fall.

Our family loves to watch the Harry Potter movies throughout October, November, and December.

Maybe it’s because many of these movies take place during their Fall and Winter seasons.

Have fun, and be prepared to love all the Harry Potter movies even more after this!