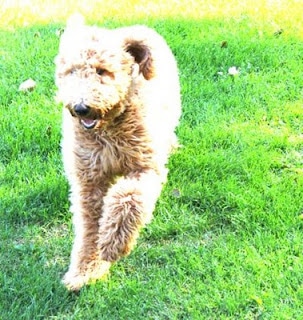 Isn’t he lovely? Isn’t he precious? Isn’t he wonderful?

Well, yes he is! But there are other words that I would use to describe this labradoodle named Jeffer or Jeffers. Trouble maker, little menace, destroyer of the backyard, dirt digger, poop maker, and an overall time consuming pain are some of my personal choice words! Since we’ve had Jeffers, quite a few things have happened. In the past few months Jeffer has destroyed a screen window, the screen door to our patio, and another screen to the back door. Also on the same back door he has managed to poke a big hole in it (by slamming against it and jumping on it) and sneaked into the garage. Only there to get in to boxes, tools, and other loose ends scattered all over the place. Oh, and let’s not forget the big whole he has dug up in the back yard. Whew, can we say raising a puppy is more than I expected? And yes, my husband is over here saying… “I told you so”. I knew it was going to be a lot of work, but didn’t expect that I would go through this much grief and pain! I could go on and on about all the things this little doggie has done to add more work to my life.

But for a second, let’s talk about the positive things Jeffers has done to earn his keep. One of the things that we thought would happen when we brought this dog specifically, is to help therapeutically with the twins. Over the past few months, Zion’s anxiety and sensory issues have increased. They’ve increased to the point where it has started to make all of us completely miserable. The mornings before school were horrible. The transition from getting up, eating breakfast, getting dressed in a fast-paced environment with other kids doing the same thing was overwhelming. A few days prior to this particular morning in question, he had stayed home sick. Me, being the inconsistent and forgetful parent, forgot to tell him that he would be going back to school that particular day. His anxiety levels shot through the roof and he started having a panic attack. I know…I know.. I should have told him. But sometimes parents forget! We try hard to be consistent and follow our children’s rigid schedules and needs, but we’re human! Anyways, we were saying anything and everything to make him stop and nothing worked. Then I mentioned, “hey what if Jeffers rode to school with you, to help you go back to school?” Immediately, the tears dried and up and he said okay! That was it! That little trouble-maker saved the day! Zion finished getting ready for school without any more fuss or anxiety! Over the next few mornings, Derrick would bring Jeffers in the house. As soon as Jeffers was in the house, whatever they were fighting about or stressing over would stop. They knew that if they were able to get dressed in the morning without any issues, Jeffers could ride to school with them. All the zzz’s loved this! Eventually, we stopped taking Jeffers along every day and transitioned to just a few times per week. Although he is a little menace and has been more work than I ever imagined, the boys love him and I couldn’t ask for anything else. Oh.. and he doesn’t shed! 🙂