I’m sharing my interview with Daniel Kaluuya + Letitia Wright on empowering girls, comedy, the message of Black Panther, and the characters they play in Marvel’s Black Panther movie. 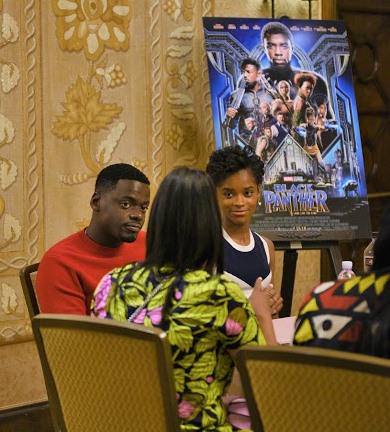 When they both walked into the room, they were both pumped and hyped- a lot like their characters in Black Panther. Letitia Wright plays Shuri’s, Black Panther’s little sister, and Daniel Kaluuya plays W’Kabi.

Shuri is T’Challa’s little sister and a smart-mouthed, tech wizard. She is second-in-line for the throne behind her brother and is the smartest person in Wakanda—the top scientist and the innovator behind the Black Panther’s updated suits and technology

W’Kabi is the head of security for the Border Tribe. The people of the Border Tribe live on the borders of Wakanda and serve as the first line of defense for the country. To outsiders, they appear to be what people would “expect” of a small African nation—but the truth is they are some of the fiercest warriors in Wakanda, intent on protecting the secrets of their nation at all costs. 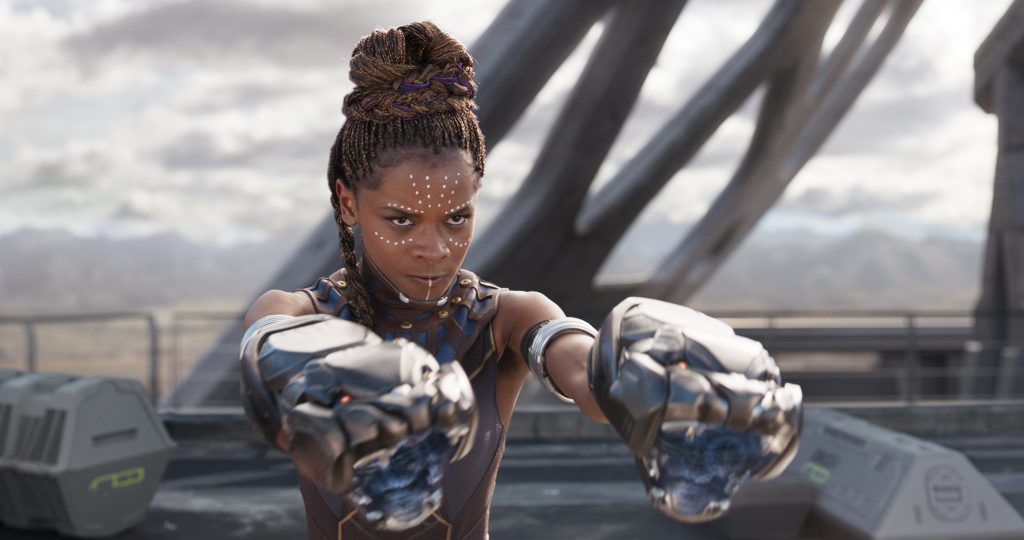 Of course, we had to talk about Shuri’s hair and clothes in Black Panther

A question was about why Shuri had micros, versus knots like Nakia (Lupita) or shaved head like Okeyo (Danai). {We also talked about hair in the interview with Lupita and Danai.}

Letitia talked about her hairstylist, Nikki Wright. Nikki was in charge of creating all of the hairstyles, and they (Coolger and Camille, the head of the hair department) decided on braids for Letitia’s character, Shuri. Wright mentioned before playing this role; she has never had braids.

Letitia also talked about Shuri’s outfits. She wasn’t a fan of dresses, but she paid homage to Ruth on bringing forth dope outfits for her and the Black Panther cast. ” Great, so the first scene, the first scene we tried on, we tried on this outfit that Ruth created with the cape and all of that stuff and the silver skirt.  And then I put my braids into two separate buns just for fun, and then Ryan was filming in the throne room. They were filming a scene then, and you have to go kind of like show-and-tell in between.

So I went in, and he was just like, ‘is that, are you like, oh man this outfit is dope, da, da, da, da,’ and he loved it.  And then he’s like, ‘is that how your hair’s gonna be?’  And I’m just like, ‘no, no, no, no, no, it’s, no, we’re gonna plan something,’ he’s like, ‘no, it feels like Princess Lea.’  And then I went to Nikki, I was like, ‘I think he likes it,’ Nikki’s like, ‘cool, gonna refine it.’  So, all of those things are like literally just people coming up with ideas and Nikki as well just literally sleeping on it and coming in the morning like, ‘I got something.’  Even like the hero look for the gauntlets, she created that. The team was sick. And now it’s on the face of dolls.” 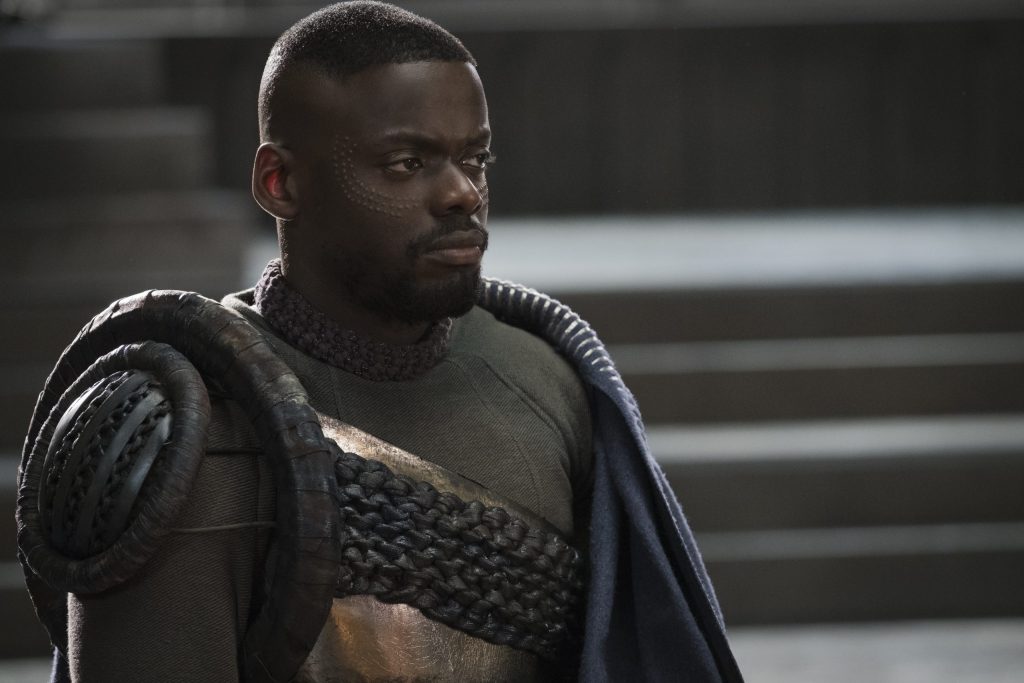 Daniel mentioned they went through a lot of sword training. “We had to kind of learn; I think what was amazing, everyone had to have their own fighting style. Everyone had their own fighting style that reflects their character.  So, W’Kabi is more like a fierce, ruthless, kind of like bub.  That’s why when he goes, ‘oh, I want to go on a mission,’ he’s like, ‘no, you can’t go on a mission, you would be too hood.’ We learned the base of certain stars that were in the African community in Africa.  And then trying to have a hybrid of all these stars, and we just worked in all these fights that we were working with. It was a long process.” 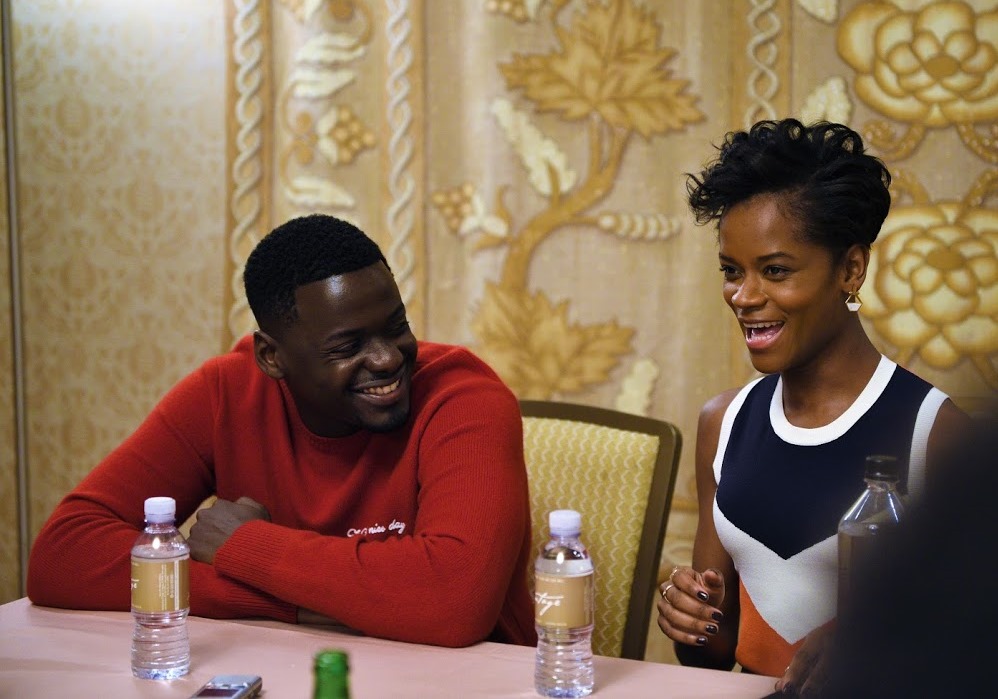 The Comedy in Black Panther

Was there a scene that you all had to keep reshooting because you just couldn’t control the laughter?

Letitia’s role as Shuri in Black Panther is hilarious. She is a scene stealer. When you watch the movie, you will see exactly what I’m talking about. She has these funny one-liners, like, “don’t sneak up on me like that Colonizer.” This line I’m predicting is going to be immediately integrated into our culture. When we talked about how funny she was, she was so humble about it. She mentioned she didn’t go into this role, thinking she was going to be funny.

Letitia: It was just down to the writing, the writing was so good and then also going home and studying the script.  And then I would find myself coming up with stuff like, ‘she would say that’ like, ‘she would say that and that’s mighty rude.’  And she took herself so seriously I guess that’s why it’s kind of funny ’cause I just went into it like (she made a gesture of going into like she was driven, focused).”

Daniel went on to talk about how everyone can identify with that back and forth sibling banter. “so it’s kind of like the best, kind of comedy for me ’cause it’s grounded, it’s just played as a relationship, and it’s about love, you know.” 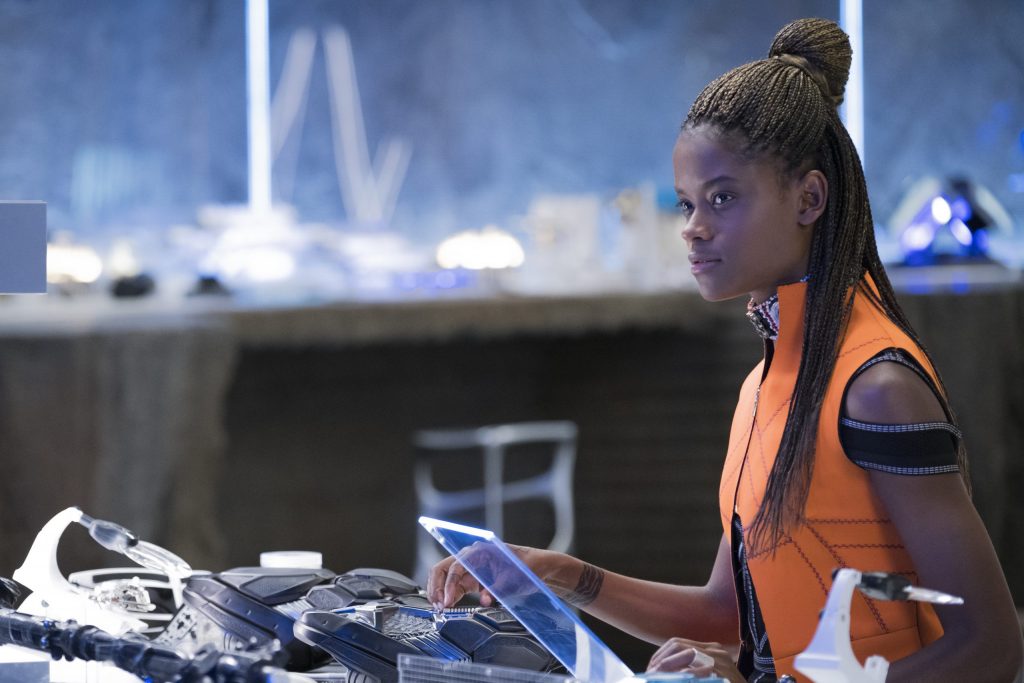 Letitia on inspiring others as a black princess

Question asked to Letitia: “I think so many people are just so excited about being represented in a film and so for us, this is just, it’s such an amazing accomplishment.  But, you are representing a black princess on film.  And you are modernizing in a way that girls I think around the world, and boys too, are gonna be so excited about.  Did you even think about approaching this is as like, ‘wow, I’m actually gonna be inspiring people, and I’m gonna be a black princess on screen.’”

Letitia: “It’s crazy because this film is pretty much years of prayer and your words are powerful man. This is something I would pray when I was a teenager just getting into acting, like, whatever I do, I just want to be a vessel to be of inspiration.  Doesn’t have to necessarily mean that that character is not flawed or perfect or has to be a perfect character but just to inspire.

When this opportunity came about,  I understood then, the magnitude of Shuri in this, in the comic books.  I understood where her arc is and where her journey is and it’s huge.  But, what I had to do was take her, a dose out of like Kendrick’s (Lamar) books and just be humble.  And just be like, ‘okay cool, this is, don’t think like that. Don’t let that overwhelm you.”

Not been a long time (acting) but just telling, and then knowing that as long as I do that, and I do it to the best of my ability, I am a vessel for that, then hopefully by God’s grace young people will be inspired.  And also that’s down to the writing and down to a big collaborative thing with the writers, the directors, the actors, and doing that and making it relatable.

“I’m the vessel for it, I do it and then if a kid can be like, ‘man I want to do science,’ I’m not trying to force it down your throat, it’s kind of like, I’m just gonna be the vessel and be real.  And be like, ‘science is cool, Shuri is cool, she can create stuff and not be looked down upon,’ and just play the truth of that, of what’s going on.  And then, if it inspires people, then yes. I didn’t take the burden on of, ‘oh my god, I’m gonna be inspiring a lot of people.’  I knew it was gonna happen.”

Daniel chimed in, sharing a moment when they were on set together. Letitia walked by, in her costume, and this little girl went, ‘ah’ in admiration.

Letitia also mentioned that Daniel would pull her to the side from time to time and remind her, “you’re a Queen you know!” 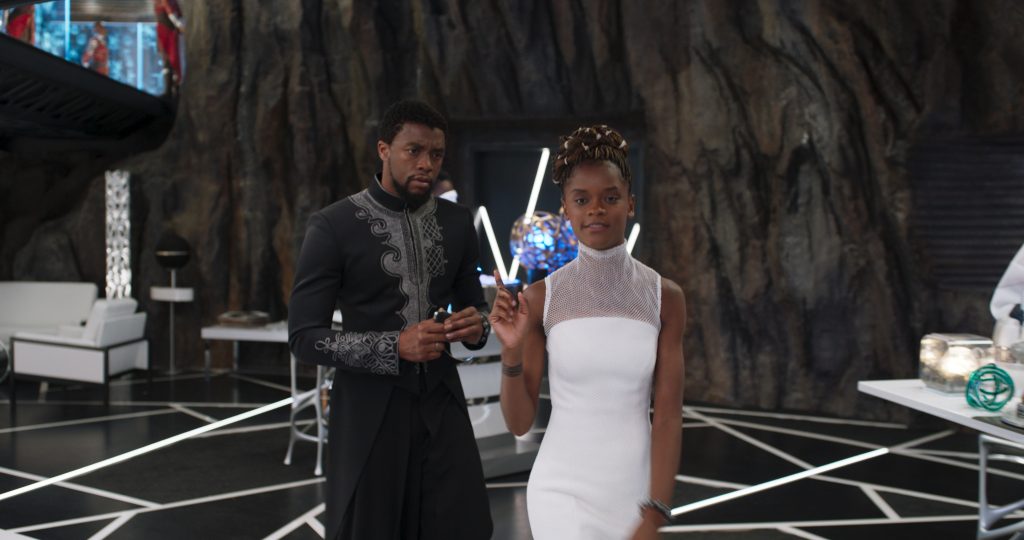 There are so many incredible messages that come out of the film.  What is something that you want to make sure that is getting across to the audience and what did you learn from this movie?

Daniel mentioned that “Killmonger one of the best villains I’ve seen. It’s how he decided to deal with grief. You know what is there to do with pain, and how you deal with pain, really informs how you move forward.”

Daniel went on to say, “it informs who you are and what you do and the energies and the people that are around you.  So, that kind of feeling, and as black people, everyday is pain. Its trauma, a lot of our films and a lot of our content is dealing with trauma.  A lot of our media narrative is trauma.  What’s amazing about this it deals with this (trauma), and it talks about these two roads, you don’t have to go down that road, but also it’s not solely about it. It’s about joy; it’s about brother and sister, it’s about family, it’s about its communities, about a nation, it’s about pride. All black experiences are being touched upon in this film.” He went on to share a few moments that stood out to him- including an exchange between Chadwick and Michael B. (I do not include it right now since it’s a spoiler).

They both feel that everyone will be inspired by this movie since they are so many powerful characters providing empowerment and inspiration.

Throughout the interview, you could see the brotherly and sisterly love Daniel and Letitia had for each other. And based on our interviews with Forest Whitaker, Danai, and Lupita, I picked up the vibe that they are one big beautiful black family. 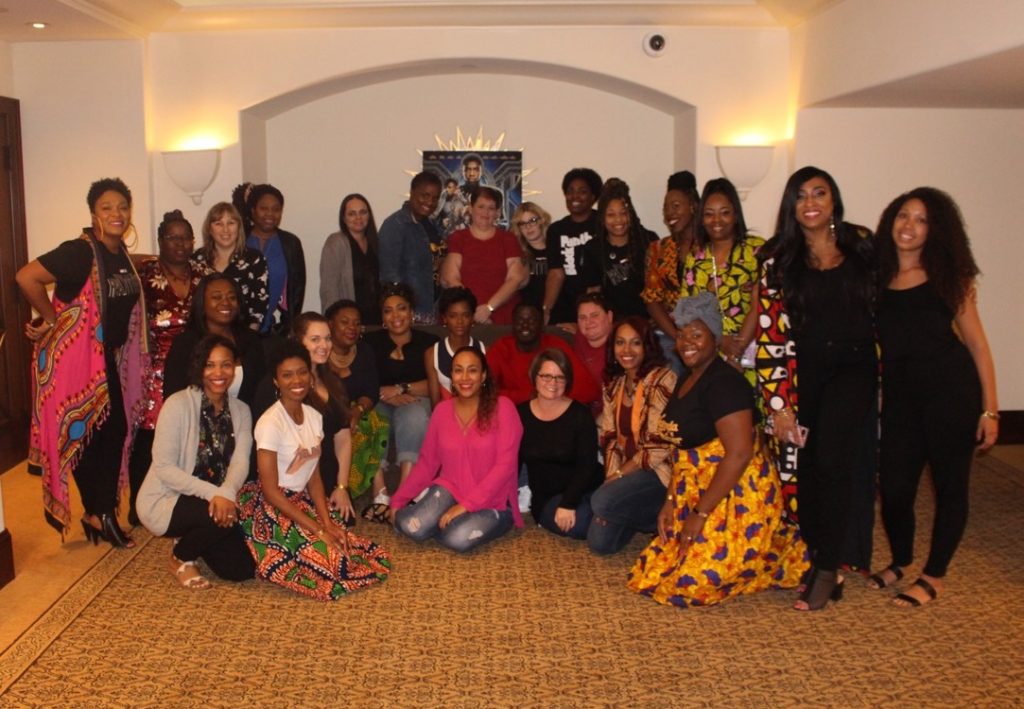 We were all sad for this interview to end since it was full of fun and laughter. And that’s what you can expect from Letitia and even Daniel. Their characters in Black Panther brings comedy in a natural way, as well empowering messages as they figure out where they stand in Black Panther. 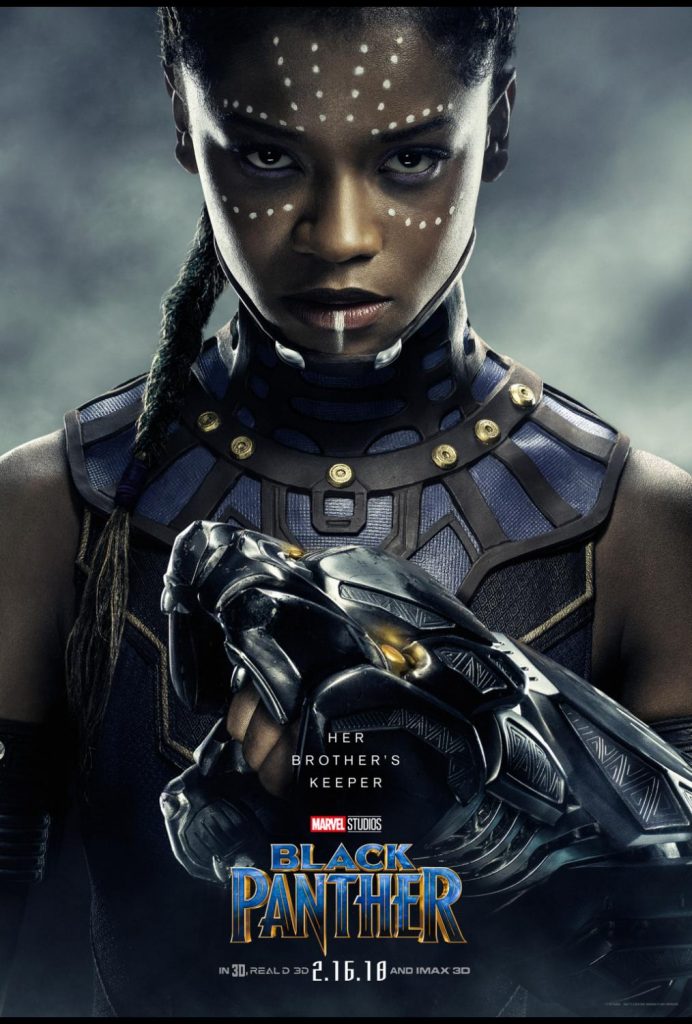 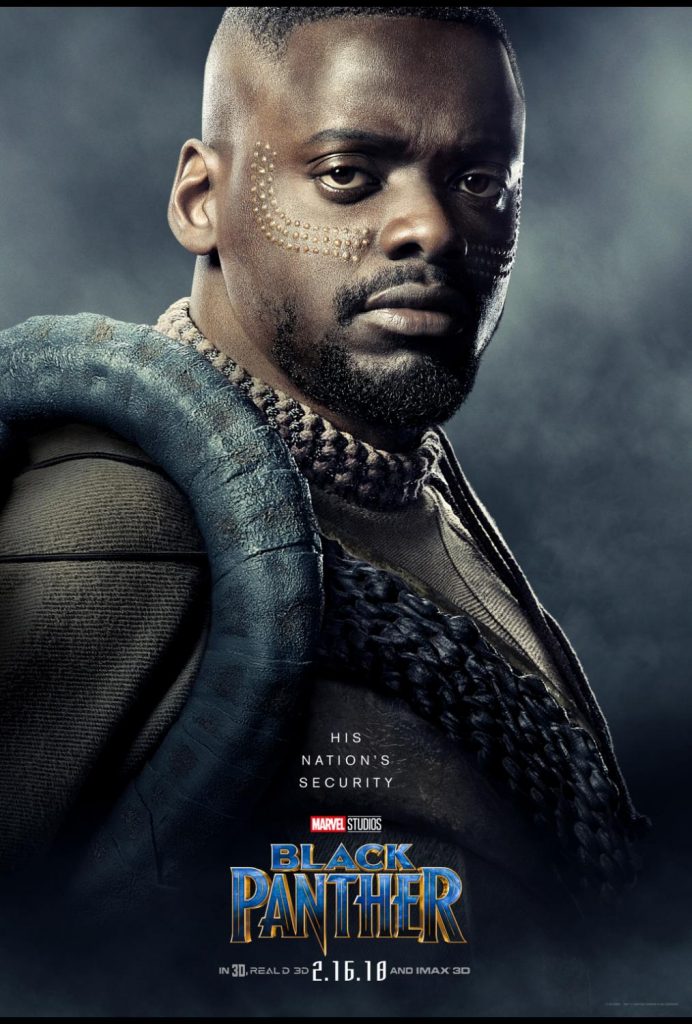