Winter’s coming. (name that HBO series). As the cold weather approaches, we’re thinking about the wonderful soup recipes to try this year. It’s comfort food in a bowl, or in this case a cup. Our French Onion Soup made in the instant pot, is fairly easy to make, with hearty ingredients to warm your soul. Grab the recipe down below!

When is the last time you really spoiled yourself with something delicious? Well, if you are a diehard foodie like me, it probably was yesterday or maybe as recently as an hour ago. But that’s the perks of being “about that foodie life”, right? We’re are always game for entertaining ourselves with the best of the best when it comes to our foodie experiences. And there is always something delicious to try, right? 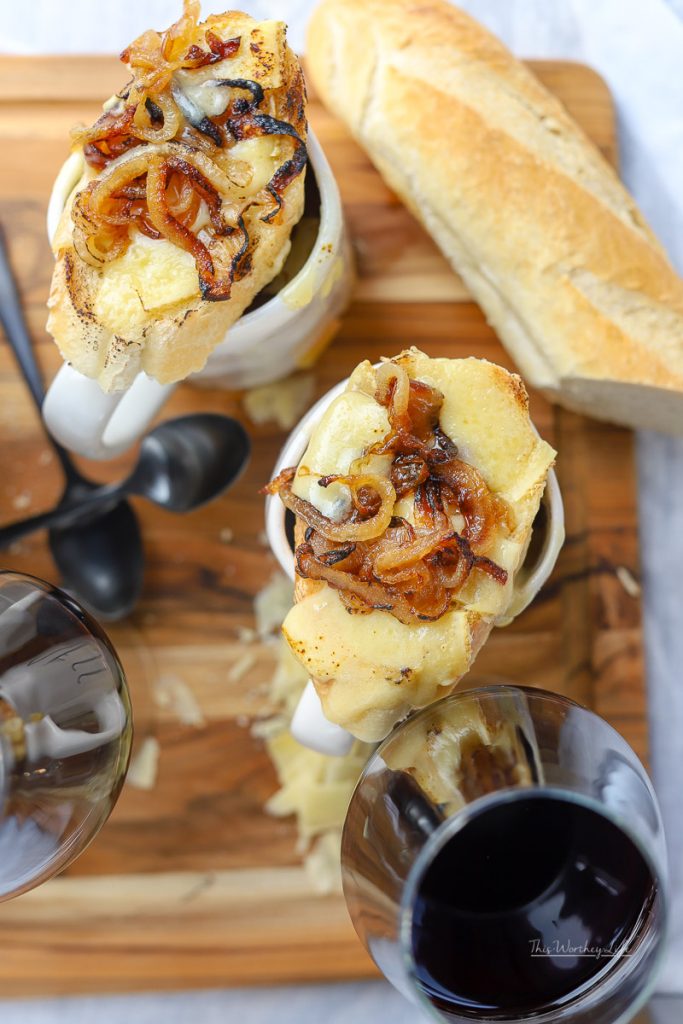 For the past couple of weeks, I have discovered the ease and simplicity of making homemade French Onion Soup in our Instant Pot. Before my discovery, for some strange reason, I was under the impression that French Onion Soup was a complicated process attempted by professional chefs and the like. But after doing a bit of research, I learned otherwise. My biggest dilemma, deciding whether to use red wine or the traditional sherry. Either works but I decided upon using the red wine, and I am glad that I did. The wine added an incredibly rich flavor, and if you’re a foodie it is pretty much all about the flavor! 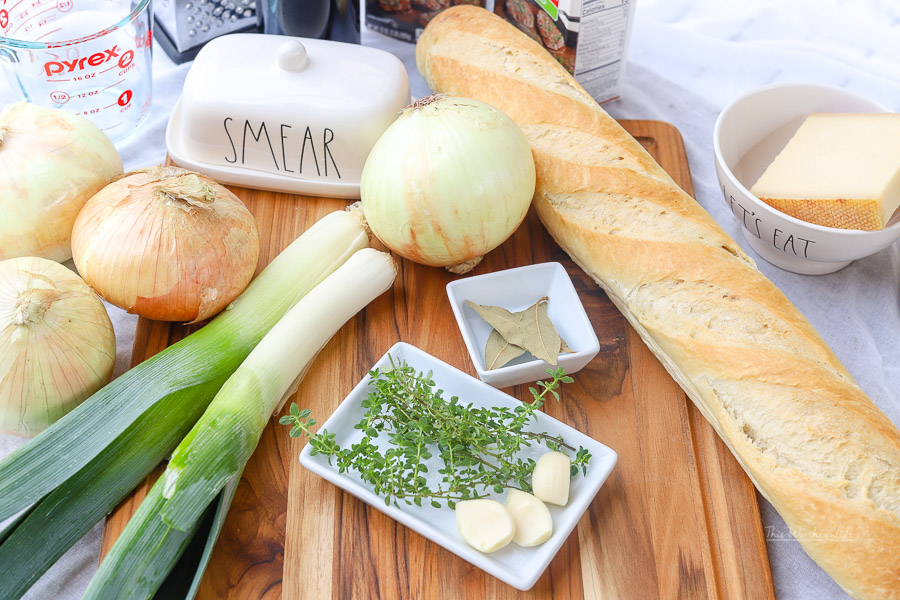 One of the reasons I have fallen in love with this recipe is how easy it is to make, nothing too complicated about it all and that’s always a good characteristic when it comes to any recipes. 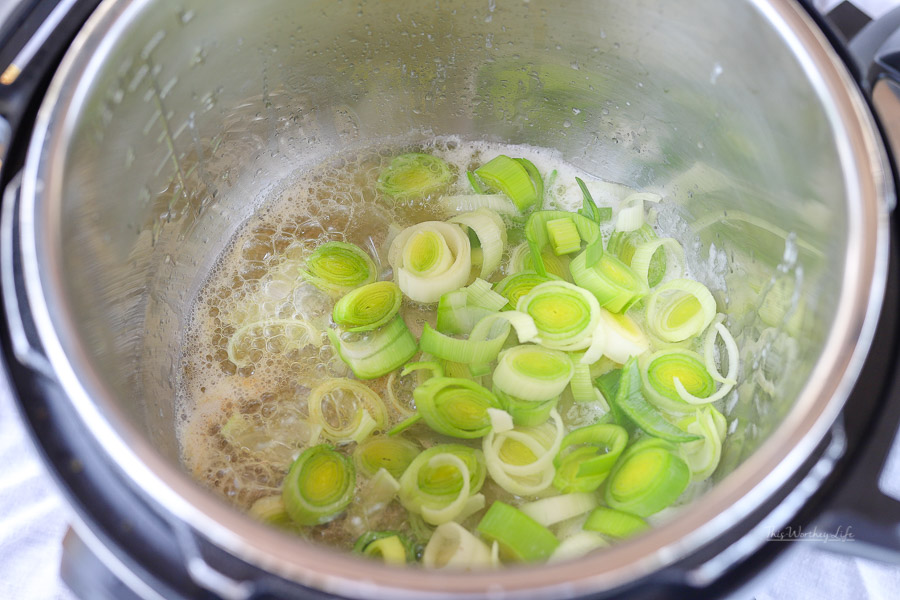 My version of French onion soup started with me looking in the fridge and pantry. I had leeks on hand, and since leeks are a part of the onion family I figured why not. Plus, leeks are milder and sweeter than a yellow onion, and with two tablespoons of butter, I was on my way. I really wish you could smell what’s going on here, the aroma of leeks cooking in unsalted sweet cream butter is so freakin’ good!

Next, I removed the leeks and added four large sweet Vidalia onions, these were sliced thin using a mandolin, and I added two more tablespoons of unsalted sweet butter. There are two important keys to making perfect caramelized onions, and that is cooking them slow and low, and of course, quality butter doesn’t hurt either. Sauté the sliced onions for twenty-five to thirty minutes. The onions should be browned, soft and I prefer mine with crispy edges. Getting the onions cooked down is the heart and soul of this French Onion Soup. 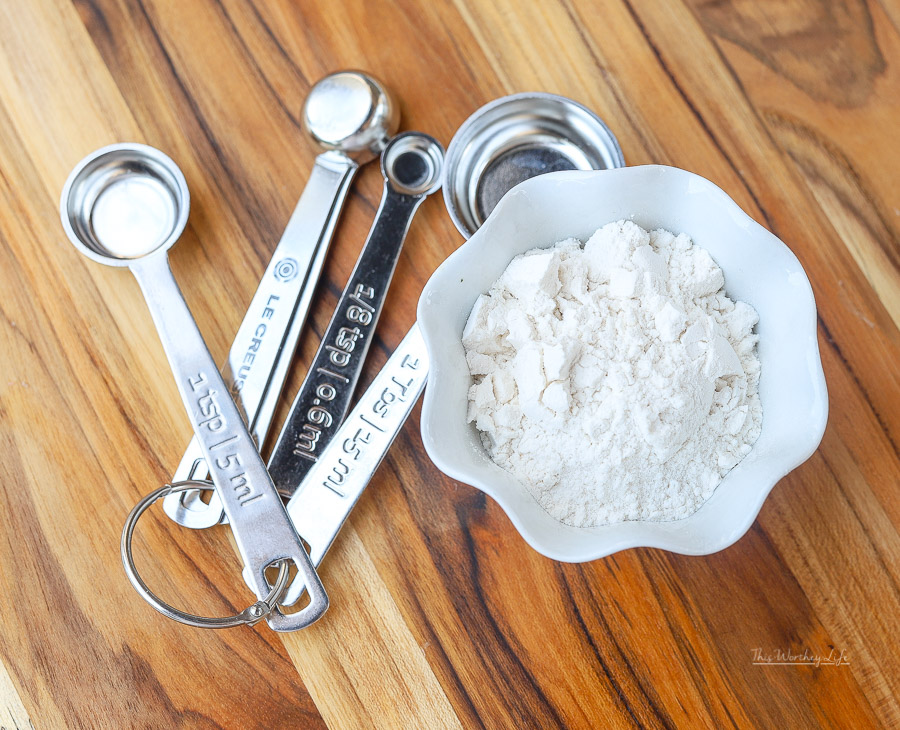 Pro tip. The longer you cook the roux, the more intense flavor you will achieve. Also, cooking roux requires you to constantly stir the roux to ensure it doesn’t burn. Traditionally there are three types of roux: a white roux, a blond roux, and a dark roux. The two ingredients for roux are using an equal weight of flour and fat, in this case, the fat of choice is butter. Here, we are using three tablespoons of flour and three tablespoons of butter. I made a slightly darker blond roux which took between 12 and 15 minutes. 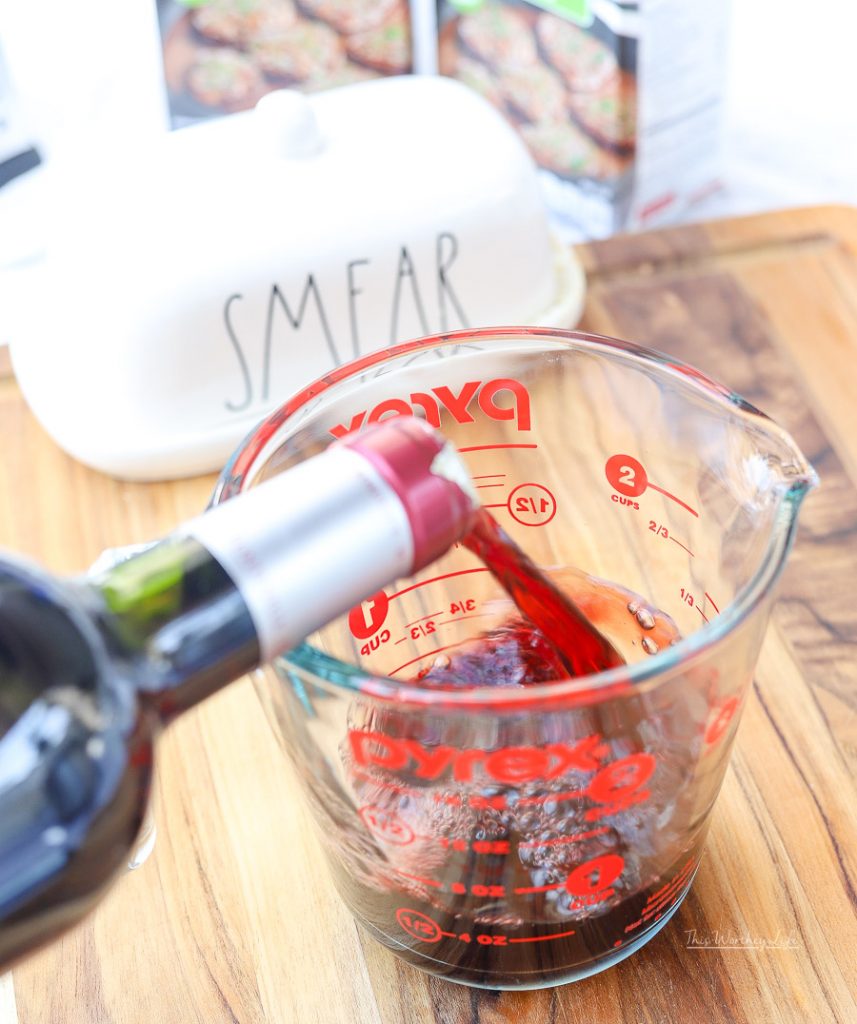 It’s not unusual to find lots of French Onion Soup recipes utilizing wine. I used what I had on hand, a nice 2016 Bourboux which worked perfectly. Plus, the wine adds more liquid volume than the sherry would. 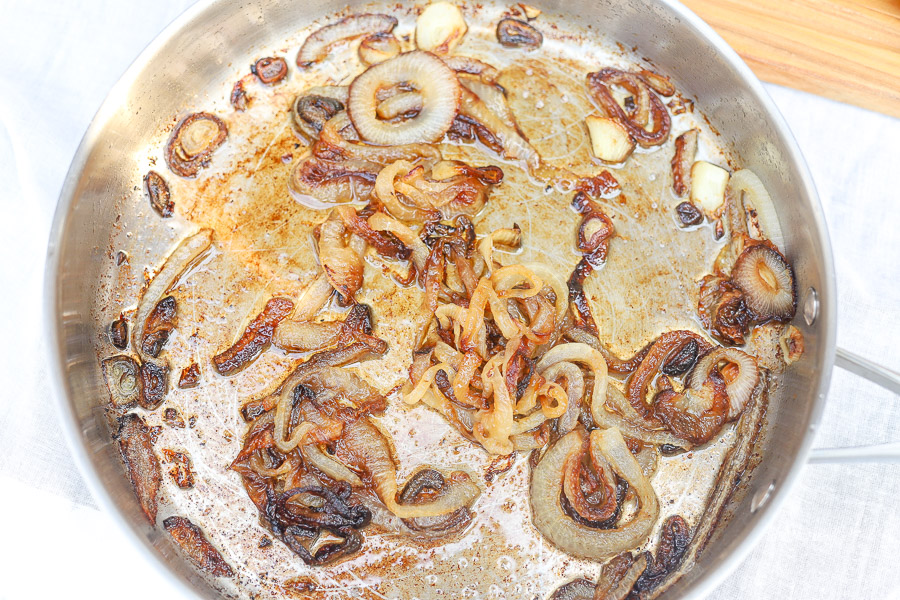 I also made additional carmelized onions to serve atop the slices of the toasted French baguette. 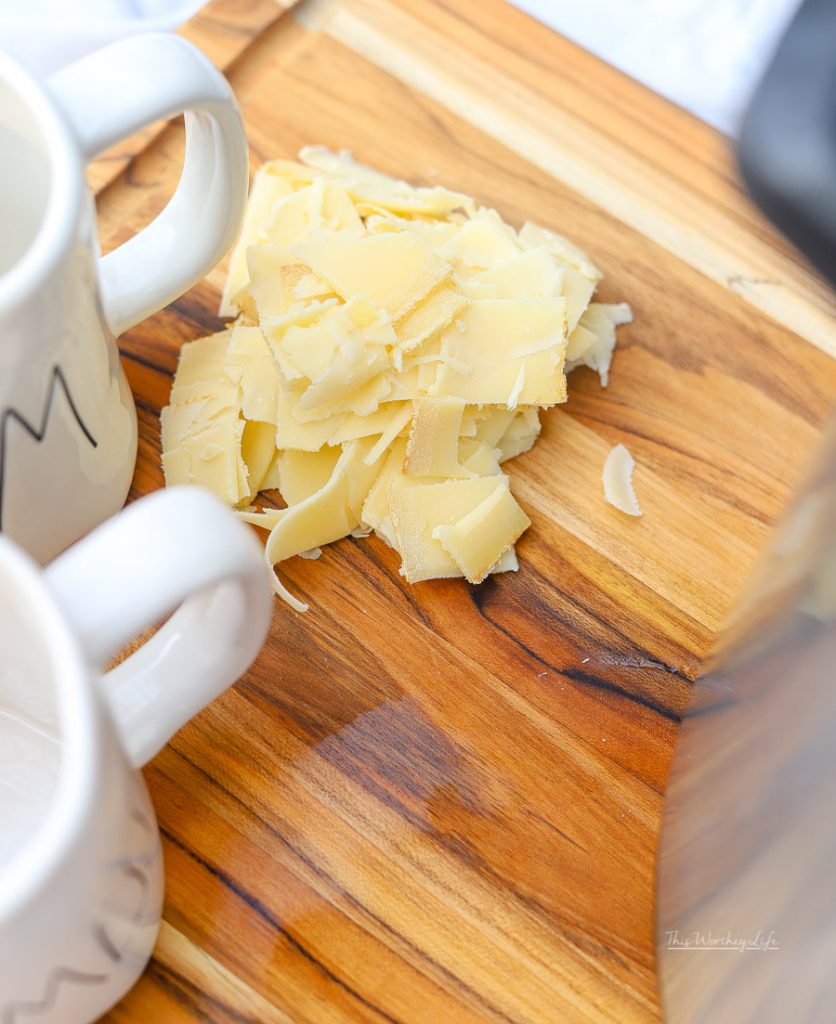 Although traditional French Onion Soup calls for Gruyère cheese which isn’t a French-produced cheese, go figure. But I raised the bar and used a cave-aged Gruyère variety which was so much better than the regular Gruyère, so worth the additional expenditure. You can also use a good Parmesan or Emmenthal. 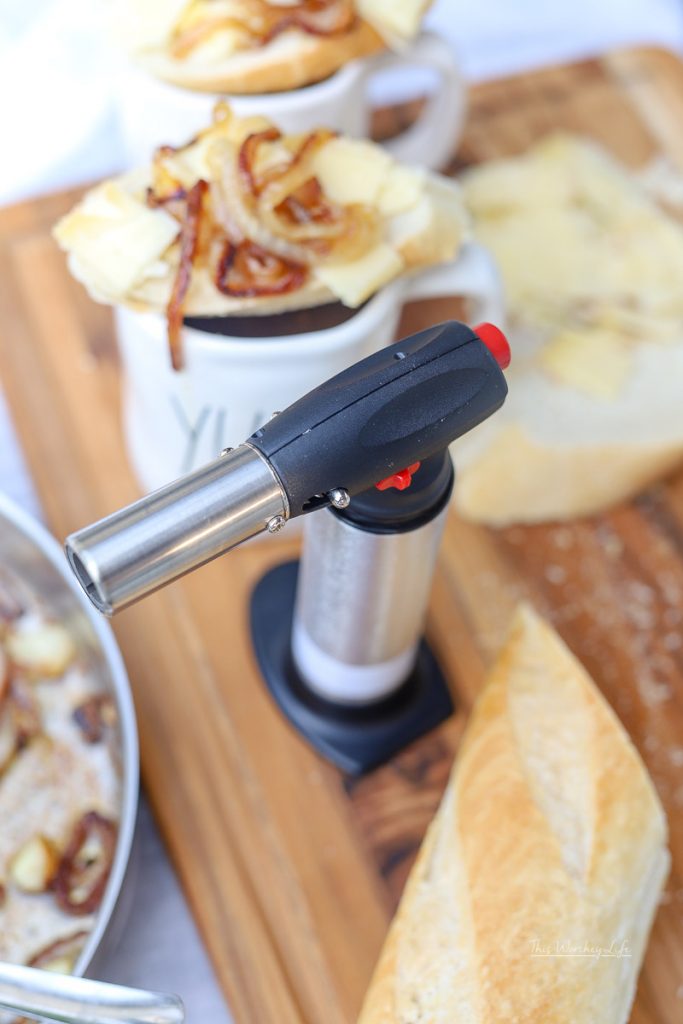 Although I toasted the Gruyère and caramelized onion topped baguette sliced in the oven using a high broil setting I employed my handy chef’s torch to add the finishing touch of adding a bit of char on the additional cheese I added. 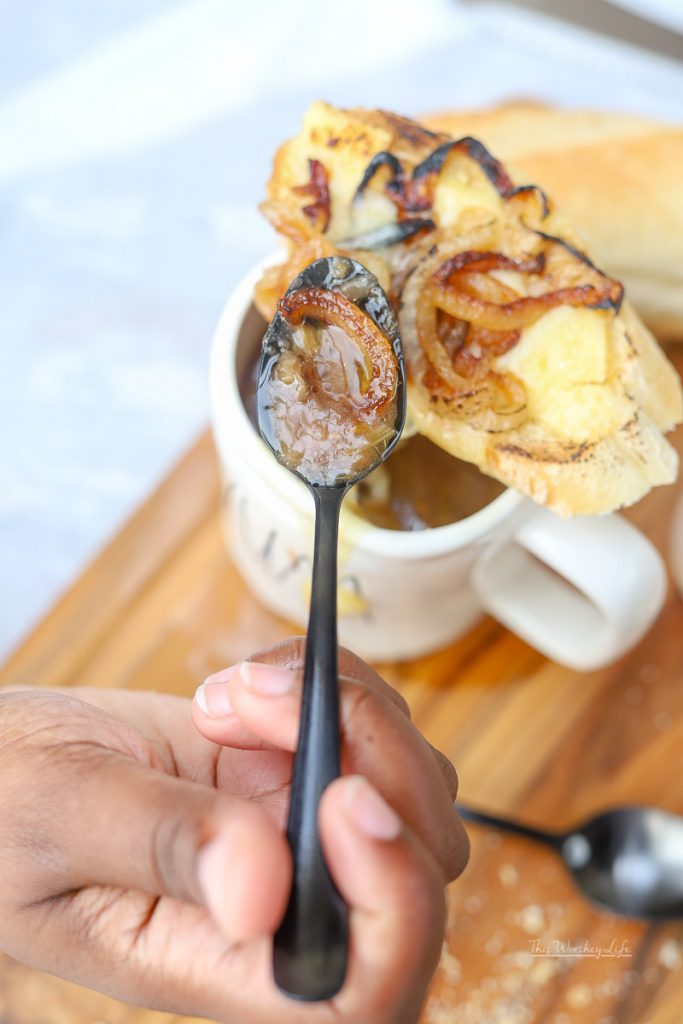 This French Onion Soup has lots of intense flavors, it’s a bit heartier than a classic version with bits of leeks, hints of garlic, and the additional caramelized onions tossed in to finish it. I also served the soup in these beautiful Rae Dunn mugs, a nice homey touch. I think. I love it, and we hope you will love it too. 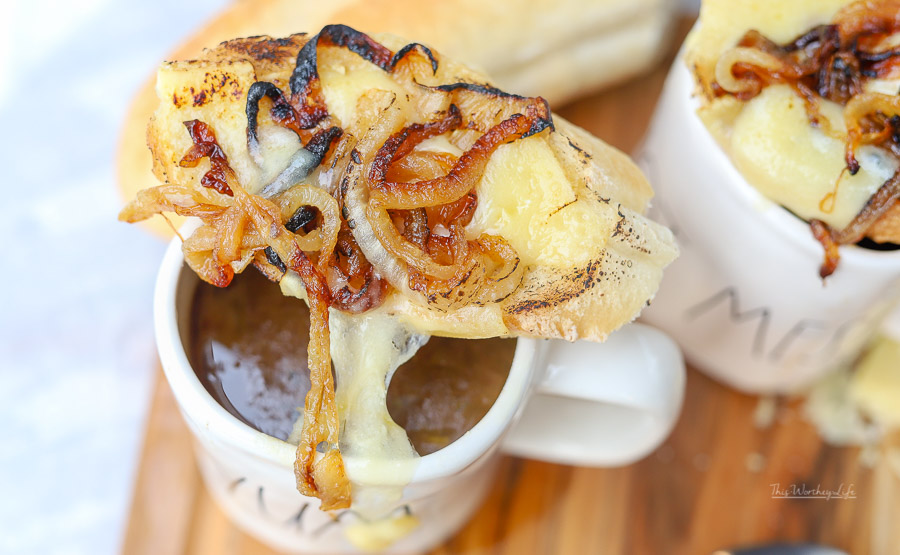 With minimal ingredients, you will be slurping this delicious, and perfectly suited for fall, soup in no time flat. 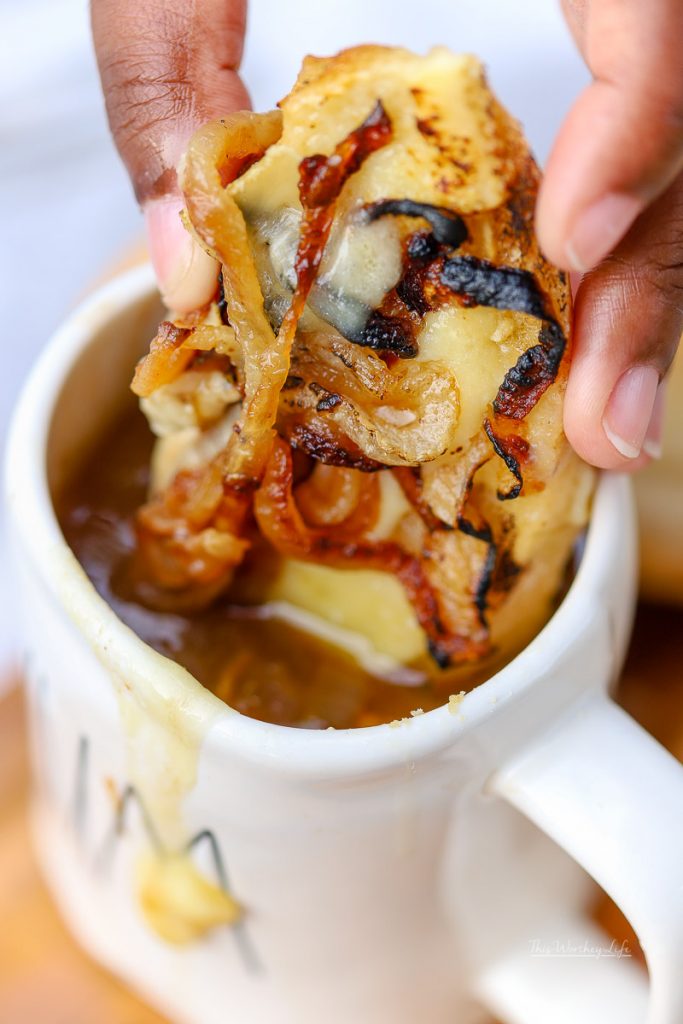 And this toasted baguette loaded with caramelized onion and melted Gruyère cheese is perfect for dippin’. But don’t take my word for it, this one you just will have to try for yourself, and I don’t think you will mind at all. Bon appétit! 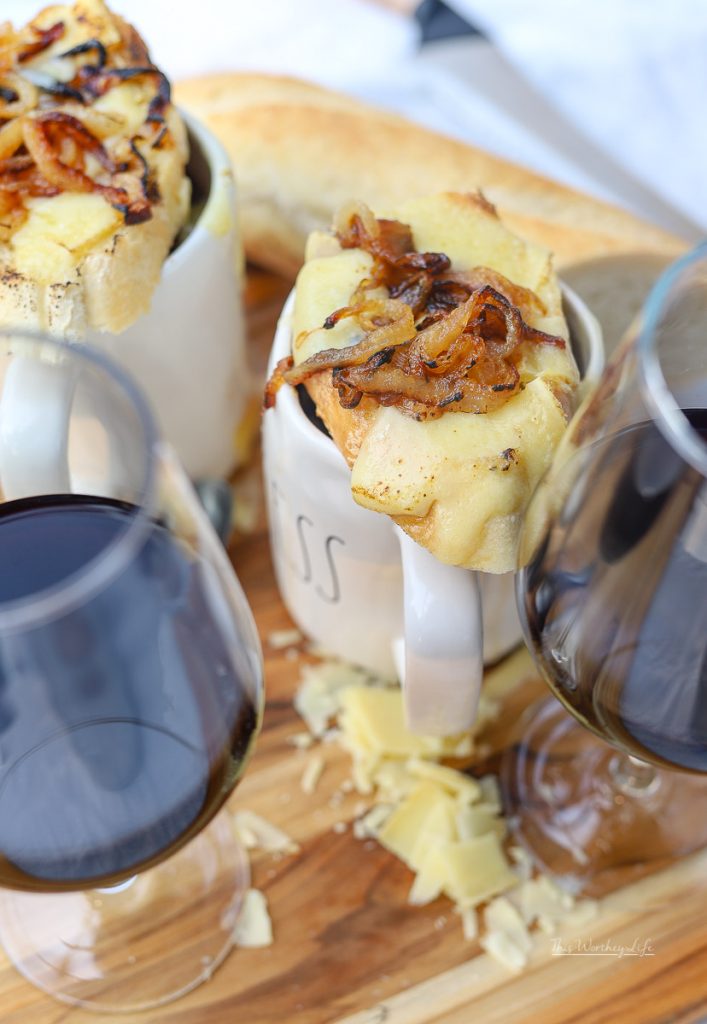 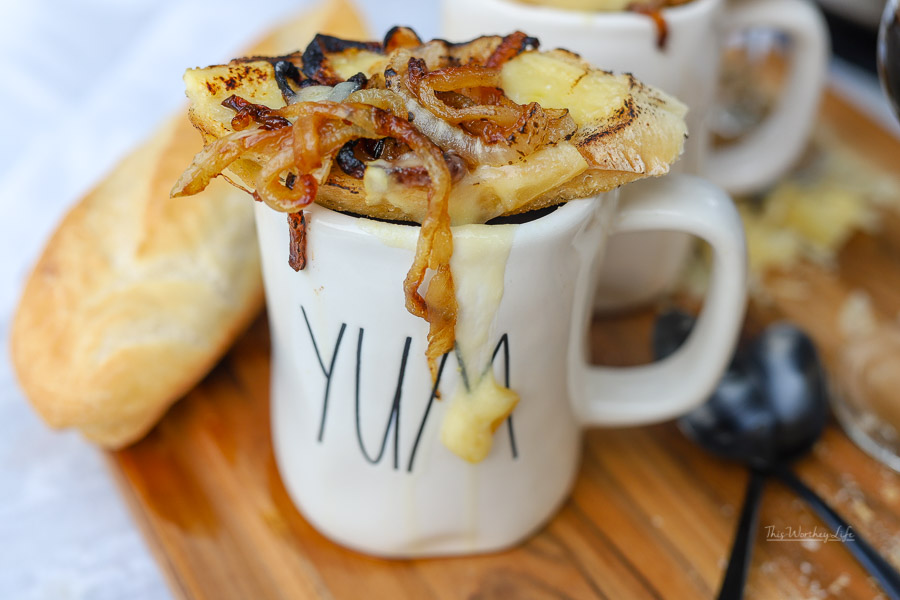 This is one French Onion Soup recipe to keep around when the temperature begins to drop! So good!