VOYD is a young, overeager mega-fan of Elastigirl. Her superpower is the ability to divert and manipulate objects around her by creating voids that allow the objects to appear and disappear. Sophia Bush lends her voice to Voyd. Voyd is part of the “WANNABE” SUPERS are a group of second-rate Supers who aspire to join the ranks of the Incredibles, Frozone, and other popular heroes. They team up with the Deavors to help bring Supers back. 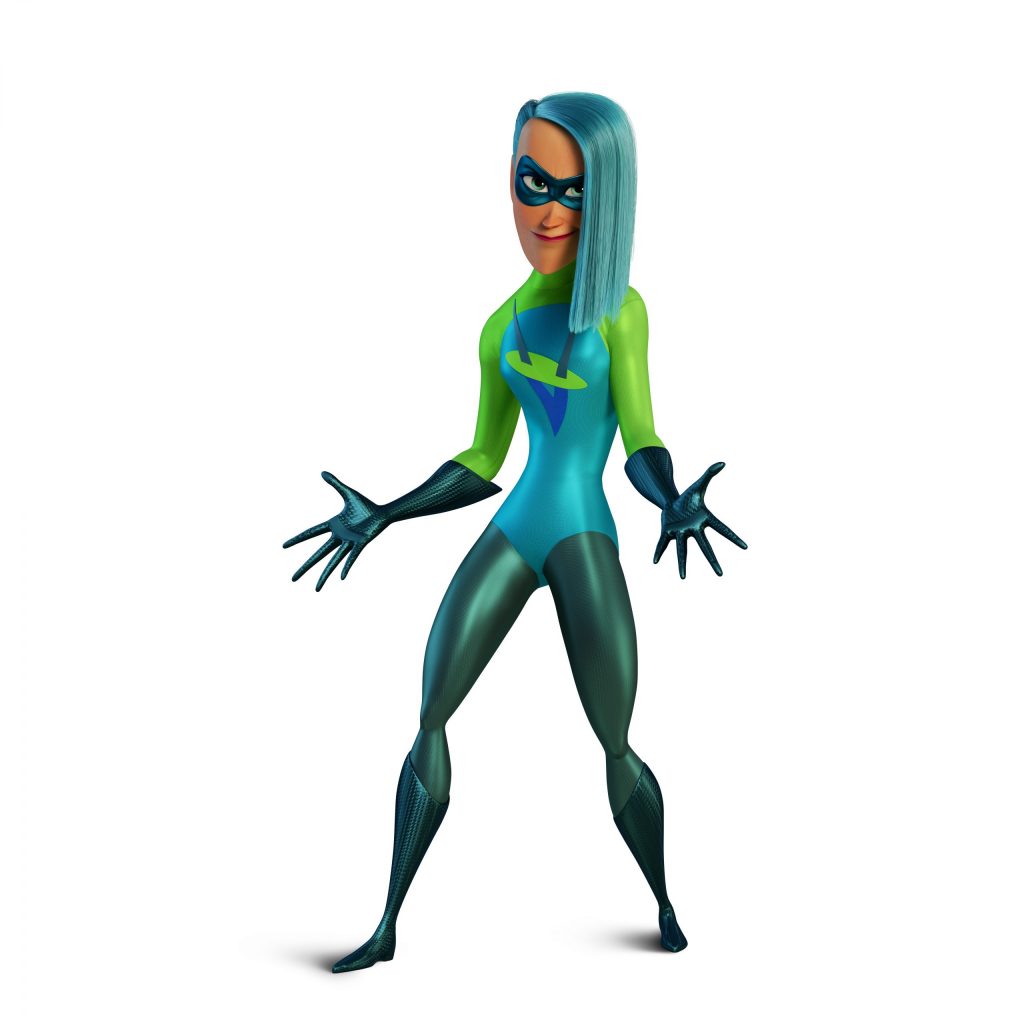 It’s been a whirlwind the last few weeks from the Incredibles 2 press junket, having fun at Disneyland for the Pixar Fest, and coming home to share all of my experiences. During our press junket day, we interviewed some pretty awesome people. Our last interview of the day was with Sophia Bush (voice of “Voyd”).  I’ll have to say; this interview surprised me the most. Sometimes, you never know what the talent will say, how they will act, and what takeaways you will get.

When Sophia Bush entered the room, carrying a white coffee mug, full of sparkle and life. She noticed the plastic water bottle on the table and motioned for someone to take it away. 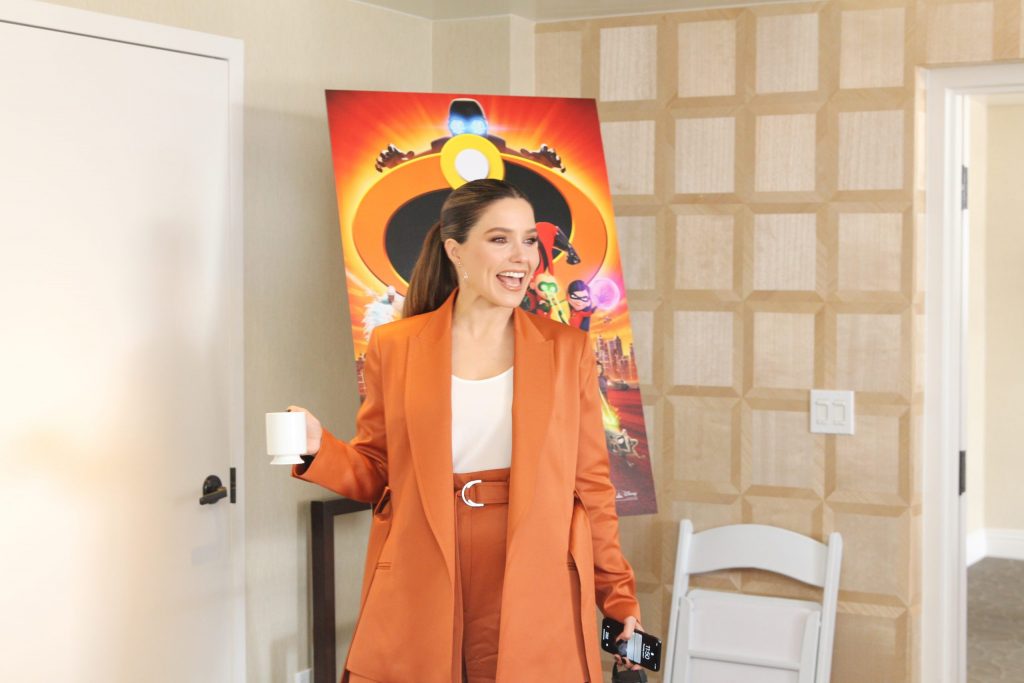 She then turned to us and said: “I’m on a 30, well, hopefully forever, but a 30-Day-No-Throwaway challenge. And they’re reusable (referring to her mug), so I encourage everyone to join me. It’s been really fun. Also, it’s bizarre, especially when you do like a junk-it realizing how much stuff gets thrown away. That is not a nice thing to do to a person.”

Shen then wanted to know where we were from, so we shouted out different areas. From her reaction, it sounds like this may have been her first interview with a room full of women bloggers. She also thanked us for coming. How gracious is that?

Sophia gave us a lot to chew on with thorough answers, with a focus on what’s going on around us in Hollywood and around the world. 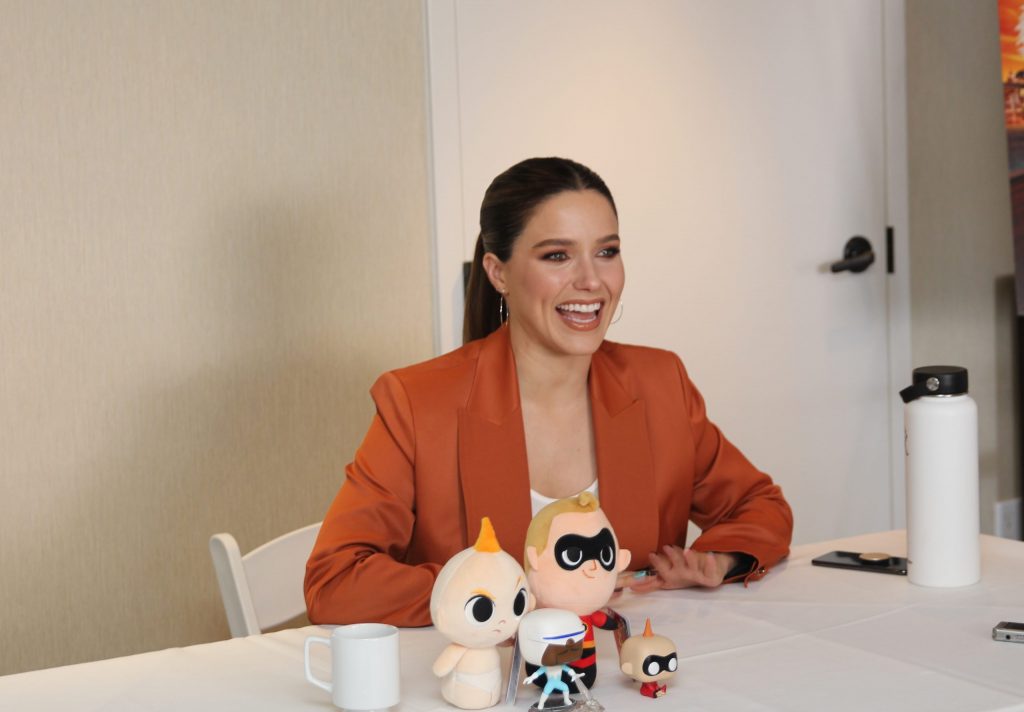 An Activism For Women

As a woman who’s heavily involved in activism for women in Hollywood, what did it mean to you when you found out that this was like a strong women’s centric movie?

“Well, I told Brad he’s clearly psychic because this movie was three years in the making. So, this was pre the Time’s Up conversation being had. This was pre a lot of these studies about gender parody and even current stages of pay disparity, our lack of paid family leave in this country. Even when we look at some of the statistics that have come out about how many dads are now the stay-at-home parent, how many women earn equal to their male partners, how many women are the primary breadwinner in their households.”

She went on with, “And he’s (Brad) so for us, and I think it’s so important to be grateful at a time like this to our excellent male allies because it’s like we’re not looking to burn all men at stake. We just wanna like throw the trash out. Like Harvey Weinstein is trash. Bye.

This film was ahead of its time, in a way, when it was written and when it began. And I think it’s so smart, because a lot of these conversations when we talk about the data around gender, people are like, oh, my God, especially people who don’t agree with us, who don’t wanna hear about race, who don’t wanna hear about sexual orientation. It makes them tense. And this movie manages to talk about identity and empowerment with not an ounce of tension, with so much humor.  It welcomes everybody to the table. I’ve not heard a single guy be like, oh, that’s like a woman’s movie. They love the movie. And I’m like women’s issues are just life. You don’t have to do the thing.” 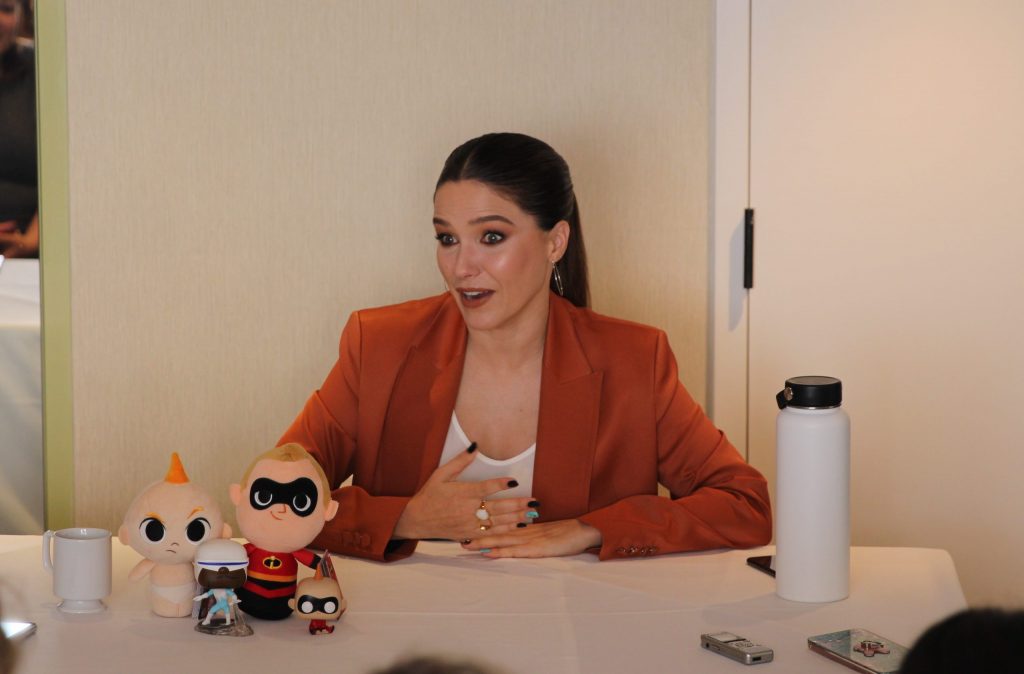 Her real-life superpower would be…

“I mean I would love to have Voyd’s powers. I think about convenience, and whatever the power is that would allow me to teleport, I’d like that. ‘Cause like I have to get on a red-eye tonight. Do you know how happy I’d be to just like grab my bags and twitch my nose like Samantha from Bewitched and just be in another city? Like, no more TSA, no more bad airport food, no — it would be the biggest game changer of my life. I would love that.” It sounds like Sophia and Evelyn have a lot in common with their wish on superpowers. 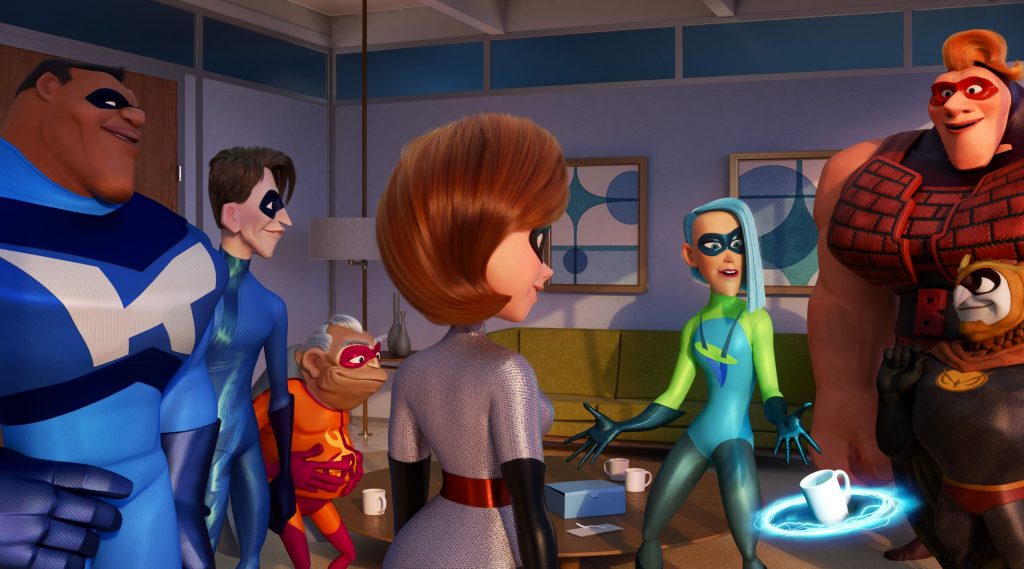 SUPER DREAMS – When Elastigirl is called on to lead a mission to bring back Supers, she meets a group of new Supers who aspire to join the ranks, including Voyd, a mega-fan whose superpower is the ability to divert and manipulate objects around her. Featuring the voices of Holly Hunter as Helen aka Elastigirl, Sophia Bush as Voyd, Phil LaMarr as Krushauer and HeLectrix, and Paul Eiding as Reflux, “Incredibles 2” opens in U.S. theaters on June 15, 2018.. ©2018 Disney•Pixar. All Rights Reserved.

How Sophia came into the Pixar family

Sophia was having lunch when her agent sent her an email. It’s important to reference the lunch and checking her email, because Sophia typically doesn’t bother with checking emails, etc. “I got a text message that said, open your email, because people know that I do not email. I’m like allergic to it. I think the user interface is terrible. I don’t understand how nobody’s redesigned the inbox.”

I love how real she is with her life!

“I opened my email, and there was this letter from my agent, and I sort of started having an outer-body experience and like couldn’t figure out what I was reading, because I got very emotional. And I opened the PDF, and the scan that was attached to it was the actual letter from Brad Bird on Pixar letterhead offering me the part, telling me who Voyd was, asking me to come and join the Incredibles family. And at the bottom of the page are all of the Incredibles family in like this beautiful 2-D drawing.

I screamed so loud the whole restaurant turned and looked at me. I was morbidly embarrassed and also very excited. And I asked him; I said I don’t understand how this happened. And he said, well, you know, years ago you came up here to learn about animation (to Pixar), and I did. I spent a day like asking all of the animators crazy questions about code, like a total nerd. It was the best day of my life. And they have great care there, so lunch was also very nice.”

Sophia said Brad Bird (writer/director) went on to tell her, “And he said, you know, what we started to do was look for something for you knowing how excited you are about this whole universe. And they take samplings of your voice from other jobs. So, they basically cut generic enough sentences of your dialogue and then cut it together with the other actors in Pixar films and figure out who’s voice they like the sound of your voice with. And they liked me and Holly’s voices together. And I was like she’s a queen. I am dead.” 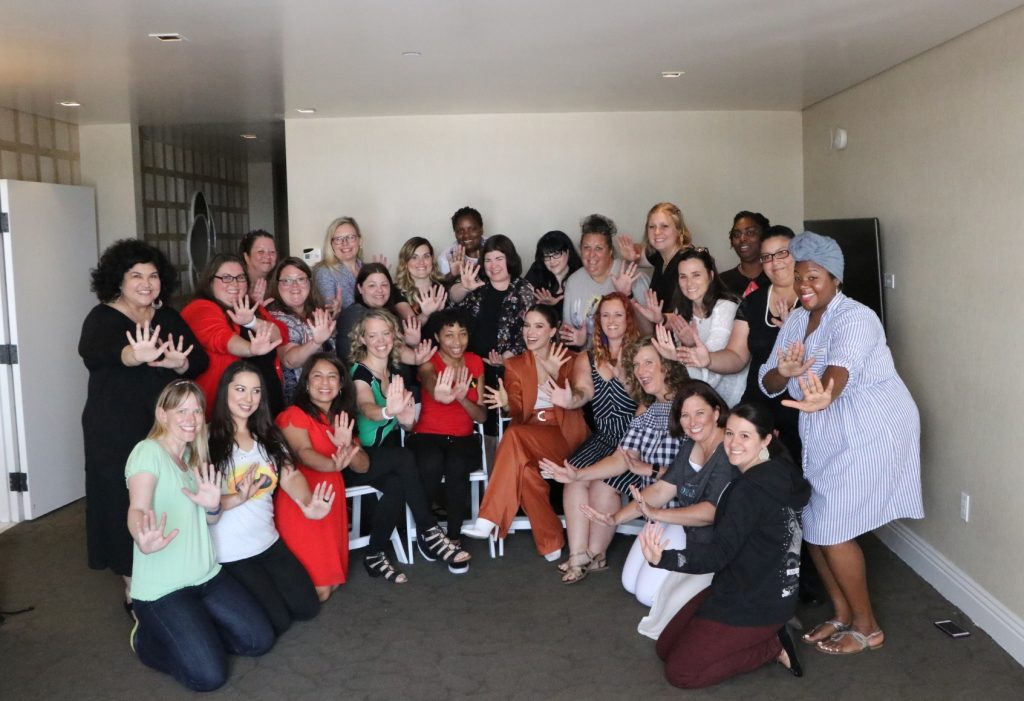 We went on and on, talking to Sophia about her custom clutch on the red carpet, to about her activism work. I love how fierce she is, confident in the work she is doing, and not letting Hollywood stop her from speaking out on the things she loves.

You can see the phenomenal job Sophia did as Voyd in Incredibles 2, currently play in theaters everywhere.